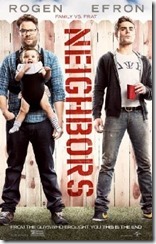 Neighbors is the first of the crop of Summer comedies that tend to get less attention than their blockbuster cousins. Along with Seth McFarlane’s A Million Ways to Die in the West and the 22 Jump Street sequel, Neighbors looks to show us some good laughs while we’re taking a break from Spider-Men, X-Men, Winter Soldiers and Kaiju-fighting Godzillas.

Neighbors sets the summer-comedy bar high both by being hilarious and by using the humor to critique our youth-obsessed culture.

The set-up of Neighbors is – as with most summer comedies – straightforward if unbelievable: a fraternity who burned its last house down moves into a suburban neighborhood, right next door to a young couple who just had their first baby and bought their first home. The comedy is generated by the clashing quests: the fraternity is hell-bent on throwing a party that will make them the stuff of legends, while the new parents just want peace and quiet. New parents Mac (Rogan) and Kelly Radner (a surprisingly hilarious Rose Byrne) are unwillingly pitted against fraternity president Teddy (Zac Efron) and his vice-president/BFF Pete (Dave Franco). For the Radners, Teddy and Pete represent the life they fear they’ve left behind forever. Now that they’re parents, they can’t party with their non-parental friends. They’re always tired.

The fraternity is at once an enemy and a promise for the Radners. Their constant partying disrupts the Radners’ adult life: their baby can’t sleep, they can’t sleep, Mac can’t function at work. But the Radners clearly don’t love their new grown-up life. At great cost to themselves, they try to take their baby to a rave. Kelly has clearly quit her job to stay home and feels isolated and under-utilized. Buying the house has put a financial strain on their marriage. No wonder Mac and Kelly want to appear “cool” to their new collegiate neighbors. No wonder they abscond to party after party – armed with their baby monitor. The adult world has proved to be terrifyingly mundane. They see a promise of youth, a possibility – however irrational – to return to their younger selves, which they’ve imagined to be superior to their adult, responsible selves.

Mac and Kelly embody the idolatry of Youth that characterizes our culture. Their journey becomes a critique of our youth-obsession.

The film culminates at the year-end, legend-making mega-party, Plato’s Ideal Party, the college party to end all college parties (though to be fair, I think Animal House still has them beat by a long shot). But whether the party is a success or not is irrelevant – the film has already judged the whole event – and by extension, youth itself, to be irrelevant. In the days leading up to the Party, Pete finally confronts Teddy, calling for an end to the feud between him and the Radners. Teddy appeals to the quest: to become one of the legends of fraternity life, alongside the elder brothers who invented Beer Pong and Boot-n-Rally. Pete (who unlike Teddy is poised to get a fantastic job after graduation) points out the hard truth Teddy doesn’t want to admit: it’s all a game. Fraternity life, the party experience of college, it’s all as ephemeral and manufactured the arbitrary rules of a children’s game. In his words, “None of this will matter in two more weeks.”

This is the film’s message: so fleeting a thing as Youth makes for a poor god.

The Radners come to see their new lives as valuable in and of themselves. When confronted with the insanity of Ideal Youth, they recoil in horror, coming to a new appreciation for the richness and fullness of their adulthood. In the end, Neighbors supports the American Dream. It proclaims in no uncertain terms that there’s no place in suburbia for Youth. We could argue the alleged merits of the American Dream, but that’s for another film to critique. Neighbors is a critique of Youth Culture. By uprooting Youth Culture from the artificial setting of a college campus and transporting it to the Real World, its empty, fleeting nature becomes painfully obvious. And very, very funny.

Bottom Line: Neighbors is a hilarious, incisive critique of the college film, and by extension, our idolatry of Youth Culture.

YOUR TURN: Did you enjoy Neighbors? What your favorite college movie?