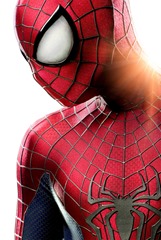 Let’s get this out of the way: When The Amazing Spider-Man 2 is on, it’s really on. Quite a few individual scenes in this film will go down as some of the greatest Spider-Man scenes on film. Spider-Man himself is finally funny. He’s cracking jokes and seems totally at home in his costume. The chemistry between Peter and Gwen is still top-notch. The vibe between Peter and Harry Osborne is so good you totally buy that they’re instant best friends even though the last time they saw each other they were like 10 years old. There’s a scene where two of the villains are working together to persuade someone – no spoilers yet – that was scary, tight and great. And (still no spoilers!) let’s just say the final scene of the film is exactly what a Spider-Man film should be.

While ASM2 is full of great moments, the connective tissue and bloated, unfocused plot can’t hold them together. 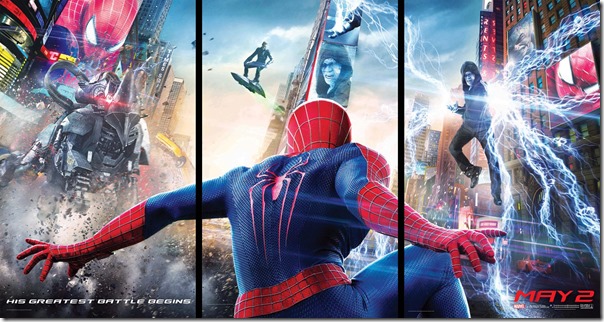 Spoilers for Amazing Spider-Man 2 after the jump!

Surprisingly, it’s not the three villains that cause the plot problems. Rhino (a nearly-unrecognizable Paul Giamatti) has a total of maybe 5 minutes of screentime (and will obviously be back for ASM3 – but more on that in a minute). Electro (Jamie Foxx) and Green Goblin (Dane Dehan) both have simple, straight-forward characters with clear motivations. Neither of them is going down as Best Villain Ever, but they work.

In what feels like a very old-school comic book move, the film asks us just to accept guys can turn into electricity and instantly be awesome at flying prototype gliders because SCIENCE. And frankly, I was happy to oblige. 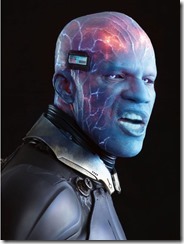 The biggest problem – other than multiple scenes that don’t make any logical sense (Why was Harry in the elevator when he met Gwen? He didn’t get off at the bottom. Does he just ride elevators all day?) – was the shoehorned-in plot about Peter’s parents. This forced us to sit through a boring opening sequence that had nothing to do with the rest of the film, a mopey Peter moping not because his core relationship in the film is off, but because he has daddy issues, and a hidden train-lab that proved to be the most ridiculous plot point in the film. That’s saying something in a film with guys who can turn into electricity or learn how to fly a prototype glider).

Why the convoluted parents storyline (especially since it was so obviously cut from the first film?) Since SONY has already announced they’re doing a VENOM spin-off, my guess they’ll use the storyline from the Ultimate MARVEL universe, in which the VENOM symbiote isn’t an alien, but an attempted cancer-cure developed by none other than Richard Parker. I’m betting SONY will try to pay off all the mystery they’ve forced into these first two films. Venom will have a genetic connection to Peter Parker, thanks to Richard Parker.

So what does this tell us about Amazing Spider-Man 3?

Given the final scene with Harry Osborne in Ravencroft, plus the announcement of the Sinister Six spin-off, we can safely assume we’ll see the Sinister Six in Amazing Spider-Man 3. My guess is that in the wake of Gwen’s death, Peter will be hell-bent on not letting anyone else die. In the face of the Sinister Six (at least one of whom – the Goblin – knows his identity), he’ll need more power than he has. Peter will turn to his father’s research, uncover the Venom symbiote and use it.

Expect to see Peter get a job at the Daily Bugle. We’ll finally meet J. Jonah Jameson and Eddie Brock. We may meet Betsy Brandt (though my money is on Mary Jane Watson). Peter will use the symbiote to take down the Sinister Six, be corrupted by it an end the film by getting rid of it. We’ll get a post-credits scene that shows us Brock becoming Venom (and BOOM: spin-off). 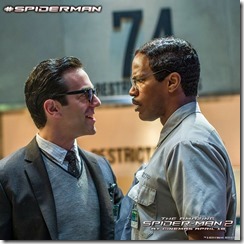 Less certain is what role Felicia Hardy (Harry’s assistant in this film) and Alistair Smythe (played briefly and excellently by BJ Novak in ASM2). Felicia Hardy is the Black Cat (basically MARVEL’s version of Catwoman). She’s a quasi-criminal who mostly just sexually harasses Spider-Man. Smythe is a scientist (check!) who builds an army of robots called “Spider-Slayers”. Could he be a villain for ASM 4?

What does Amazing Spider-Man 2 tell us about SONY’s future with Spider-Man?

It took 5 films, but we finally got the Spider-Man we’ve been wanting. He’s funny, sharp and oh-so-tragic. Director Mark Webb showed he can handle multiple villains and the number of Easter Eggs made it feel like a MARVEL film. Hopefully they’ll finally get a good story, keep it lean and mean, and Amazing Spider-Man 3 will blow the world of Spider-Man wide open.

YOUR TURN: What did you think of Amazing Spider-Man 2? Are you excited for more of these films?