That sounds like a terrible way to live. – Steve Rogers

It’s a great way to not die. – Natasha Romanoff 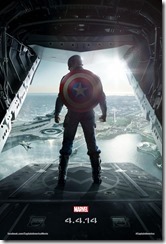 Comics are at their best when they’re modern myths – when the writers use them to tell stories so we can talk about ourselves in a safe way. It stands to reason, then, that Comic Book films are going to be most successful when they tap into the Zeitgeist and really talk about something.

In this regard, Captain America: The Winter Soldier is a runaway success (as its already more than $300 million global box office indicates). It’s a sharp, funny, fun, action-packed spy thriller – the best film of Marvel’s post-Avengers Phase II so far. The film is packed with Easter Eggs and teasers for future Marvel films.

Best of all, The Winter Soldier is an incisive critique of the post-9/11 American security state.

The film uses Captain America’s man-out-of-time experience to offer a prophetic warning about what America has become in the wake of 9/11 (though in the universe of the film it’s simply “New York” – ostensibly referencing the events of The Avengers). When Nick Fury tries to shock and awe Steve Rogers with the new helicarrier fleet designed to eliminate targets all over the globe before they become a threat, Rogers is unimpressed. He chides Fury for trading freedom for security.

Fury’s reprimand is pulled straight from any reaction to 9/11. He baptizes his fear of an uncontrollable world in the language of freedom, claiming that said freedom has a “high price”. But it appears that the high price being paid is the lives of potential enemy combatants. Steve sees it differently: the price we pay is our own souls. He observes that S.H.I.E.L.D. is sacrificing freedom for security – which is really fear.

Winter Soldier has the chance to get really thoughtful here about the nature of freedom – and almost does.

When Steve makes his observation about the lengths Fury will go to obtain security, Fury throws back in his face that the “Greatest Generation” made some pretty terrible choices as well (I assume Fury’s referring to things like the Japanese-American internment and dropping Atomic bombs, though he doesn’t elaborate).

Steve doesn’t excuse those actions except to claim that they’re in the name of “freedom” rather than “security”. The distinction is arguably artificial, though the film leaves the alleged differences between the two unexplored, allowing the false dichotomy to persist, since… you know, Captain America and FREEDOM!… and… stuff.

S.H.I.E.L.D.’s obsession with security is revealed to be a slow-burn HYDRA plot to turn America into the very thing we fought in World War II.

In a clever bit of exposition in a computer bunker, we learn that after America triumphed over the Nazis in World War II, HYDRA realized they needed to change tactics. They used fear and chaos to convince America it needed security more than freedom, allowing the HYDRA agents who’d infiltrated S.H.I.E.L.D. to create the totalitarian police state the Nazis had aimed to create in the first place. (Why does S.H.I.E.L.D. have all the periods, but not HYDRA? A mystery!)

In other words, HYDRA used fear to entice America to defeat itself, to turn us into the very monster we fought, one small step at a time, one small compromise after another, until we’d gone so far down the path we couldn’t imagine going back.

The battle for the American Soul is waged not only in the giant helicarrier battle, but in the Winter Soldier’s soul.

Bucky Barns becomes a stand-in for the American people. He is the victim of a horrible tragedy, and is now manipulated by HYDRA to commit atrocities in the name of security. If he starts to ask too many questions, he’s mind-wiped and they start all over. (I couldn’t help but compare Bucky’s plight to our post-9/11 amnesia, forgetting that America armed the Taliban in the first place, that we considered all those Afghan warlords our allies once upon a time.)

Winter Soldier wants us to see Steve Rogers, the ultimate soldier, defend freedom not by killing potential combatants, but by offering up his own life.

If the film has a flaw it’s this: Captain America and team go to great lengths to save “America”, which actually just means “everyone on my side”. The (allegedly American-born) HYDRA agents who infiltrated S.H.I.E.L.D. are unquestionably the bad guys, and despite all its complexities, Winter Soldier is still a super hero flick, where once all the secret plots are brought to life, the world is still peopled only by “good guys” and “bad guys”. You save the good guys and kill the bad guys.

That’s why the (almost painfully obvious) Jesus imagery falls short: Captain America gives up his life only for his friend. He has no compunction about terminating all the HYDRA agents with extreme prejudice. This is not Jesus’ example. His sacrifice was for everyone, especially his enemies. Rather than summon the armies of heaven, he chose to give up his life to his enemies, trusting his Father to bring Life even from Death.

Try as it might, Captain America isn’t a Jesus story.

But it is a comic book movie, and any move about the American Dream is going to appropriate some God & Country. The film’s few faults have less to do with the storytelling than they do with Civil Religion in general. Winter Soldier is a clear, uncontested success, further proof (as if we still needed any) that MARVEL knows exactly what they’re doing. Winter Soldier has permanently shaken up the MARVEL universe, and I for one can’t wait to see what’s in store.

BOTTOM LINE: As the best comic book films do, Captain America uses spandex and super-powers to discuss some uncomfortable truths we’d rather not face about ourselves.

YOUR TURN: Did you see Captain America: The Winter Soldier? What did you think of the film?