American audiences love a good hero. By hero, I mean to indicate that central figure who bravely battles difficult circumstances to emerge victorious. By good, I would like to emphasize that it is typically by the strength of the hero’s moral character that the victory is understood to be won. While over time our heroes have become more flawed and/or conflicted, the basic story of personal virtue prevailing against trial, tribulation and temptation remains popular. Within the discipline of ethics, this story arc most resembles virtue ethics, famously formulated by Aristotle. Happiness is earned by the person who struggles to cultivate a virtuous character through the acquisition of good habits, seasoned with the wisdom to know how and when to employ them. Both the Harry Potter and Hunger Games franchises reduce to virtue narratives. Harry and Katniss win in the end because of the exemplary persons they were from the beginning. American Sniper is another good example. Chris Kyle’s inner strength eventually returns him to his family after the horrors of war threaten to claim him permanently.

At first glance, virtue centered storytelling seems harmless, even inspiring. If I am a good person and hold to my core values, then I will persevere and receive just reward for my efforts. However, the corollary is less harmless. If I fail, then I am not a good person and am not entitled to persevere or to reward. Popular prejudices against the poor evidence thinking along these lines. Often it is assumed that their situation is the result of personal failing: laziness, stupidity, slovenliness. The suggestion of institutional unfairness is dismissed as encouraging irresponsibility, a dangerous denial of culpability. By focusing so tightly on personal virtue, we can turn a blind eye to systematic failures, especially those constraining an individual’s ability to make good moral decisions.*

Recently, I’ve noticed an encouraging uptick in stories that put the system’s failures in frame. Over the break, I had the opportunity to see The Big Short and consume (alright, binge through) Making a Murderer.** Both of these stories are worth watching for a number of reasons. The Big Short impressed me with its jump cut, self-aware narrative style. Making a Murderer features a female led production team, not to mention a fantastic opening theme. But what I found particularly noteworthy is the way the moral choices of the individuals within these stories become less important than the evaluation of the systems in which those moral decisions are being made. 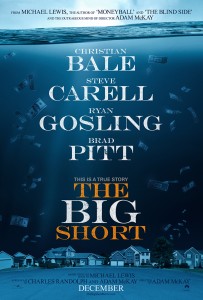 The Big Short takes a hard look at the housing market crash of 2007 from the perspective of a few, eclectic investors who saw it coming. At first, the protagonists believe they are rightfully taking advantage of Big Bank’s sloppy handling of the mortgage market. However, it soon becomes apparent that the system is not clumsy, but criminal. At this point in the story, our investors find themselves implicated in that they stand to profit from the catastrophic downfall of the global economy. By presenting their varying degrees of comfort with this eventuality, the movie refrains from passing judgment on the actions of the protagonist investors, instead focusing on the sickening lack of justice brought to bear against the financial system as a whole. Also, the film avoids personifying the banking system in an arch villain. In a way that is similar to the portrayal of the protagonists, we interact with the banking institution through a crowded cast, each at different levels of involvement and odiousness. In this way, the movie does real work to keep the audience from settling into a personal virtue narrative.

Making a Murderer is a documentary series that focuses on the case of Steven Avery. Avery was wrongly imprisoned for 18 years on sexual assault charges. Shortly after his release, Avery then finds himself at the center of a murder investigation, which eventually results in his re-imprisonment. Covering the details of both cases, the documentary squarely focuses on the conduct of law enforcement and the fairness of the criminal justice system throughout. What the audience sees is a system susceptible to personal prejudice and institutional mechanisms that move most easily for those in its employ. The documentary has been criticized for not including evidence considered to implicate Avery in the murder more deeply. However, I found that the series withholds judgment about Avery in favor of questioning the system’s ability to judge. Of all the theories currently being circulated online about the outcomes of the case, perhaps the most disturbing conclusion is that profound institutional brokenness might render individual moral decisions irrelevant to justice.

The narrative shift away from virtue storytelling and toward depicting systematic failures is an important trend especially as it intersects with the national conversation about privilege. Inherent to the concept of privilege is that only a select group of people within the community enjoy the full benefits of the community. The everyday experience of everyone else is sub par; the system does not work for them; it is broken. The fault then lies with a system which privileges few with its full function. The system’s shortcomings, rather than individual culpability, need to be our focus in the future. When the entertainment industry defends its depiction of violence and sex, it often claims that it is merely delivering to the American audience what it wants to see. Here’s hoping that stories that put the institutional failure center frame are an indication that America is waking up to the reality that fighting to make the good available to all is as heroic as it gets.

*A similar criticism is made against Aristotle’s virtue ethics. He admits that the conditions for cultivating the virtuous life include things like good health, family and education, which are not elective and not available universally. In addition, the traits considered virtuous by Aristotle are defined by norms for upper class males of his time. Therefore, with these two factors in mind, his conception of ethics is a privileged system (see definition of privilege at the end of the article).

**Although I saw it much earlier in the year, I would also nominate Sicario for this category.