This week, blunders by two massive media producers made headlines. First, DC Comics recently published the Superman/Wonder Woman Annual #2. One scene is set in the remote Pakistani village of Shimshal, and as Pakistani writer Khaver Siddiqi pointed out on Twitter, someone(s) at DC editorial didn’t do their homework:

Here’s why @Marvel is winning over @DCComics – the latter thinks we speak Pakistanian. h/t @takhalus pic.twitter.com/xzvx8VccS1

I’m sure nearly none of us knows what language the residents of Shimshal speak (even Siddiqi admitted he had to Google the town, and he’s from Pakistan). But you know… Google it. Not DC Comics’ best work.

What makes these two events noteworthy is how the leadership of the respective companies reacted.

As of publication, DC has not commented, nor according to the Independent, do they plan to comment. DC is not addressing this issue at all.

HBO’s Lombardo, on the other hand, is taking full responsibility for the failing of True Detective Season 2.

“I’ll tell you something. Our biggest failures — and I don’t know if I would consider True Detective 2 — but when we tell somebody to hit an air date as opposed to allowing the writing to find its own natural resting place, when it’s ready, when it’s baked — we’ve failed.

“And I think in this particular case, the first season of True Detective was something that Nic Pizzolatto had been thinking about, gestating, for a long period of time. He’s a soulful writer. I think what we did was go, ‘Great.’ And I take the blame. I became too much of a network executive at that point. We had huge success. ‘Gee, I’d love to repeat that next year.’

“Well, you know what? I set him up. To deliver, in a very short time frame, something that became very challenging to deliver. That’s not what that show is. He had to reinvent the wheel, so to speak. Find his muse. And so I think that’s what I learned from it. Don’t do that anymore.”

I take the blame. This from the President of Programming at one of the most successful television networks. Lombardo didn’t have to do that. He could have blamed Pizzolatto – that’s what the rest of the internet has done – and no one would’ve blinked twice. Or he could’ve made some vague, waffly statements about “commitment to better synergy moving forward” or some other corporate nonsense.

Instead, Lombardo minced no words and took full responsibility. This is good leadership.

Compare Lombardo’s blunt transparency with DC Comics’ deafening silence. How hard would it be to offer a sincere apology? How hard is it to fact-check a comic? I honestly don’t have any idea, but I can’t imagine it’s that hard (again… Google it, or even ask Twitter as multiple people have pointed out comics author Greg Rucka did when writing a character who spoke Farsi.

The larger issue is the lack of leadership at the highest level of DC editorial. Their refusal to acknowledge this mistake, especially when contrasted with Lombardo’s courageous response, highlights two connected qualities of a great leader: 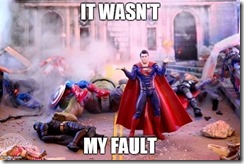 If you’re at the head of the organization, you are responsible for the decisions made in your organization. Lombardo knew this, that whatever the failings of Pizzolatto or anyone else involved in True Detective Season 2, the failure is his. And he doesn’t just offer blanket apologies. “I became too much of a network executive… I set him up… That’s what I learned from it.” Lombardo feels the failure of Season 2 as his failure. He owns it and can describe in detail what he learned and how he’ll change his behavior – and by extension the behavior of his organization – going forward.

Compared to HBO’s True Detective blunder, DC’s Pakistanian gaffe is exceptionally minor – one panel in a mediocre-performing book. It should be easy for Co-Publishers Jim Lee and Dan Didio to own this mistake and commit to implement a more thoughtful fact-checking editorial process.

One of my favorite quotes on leadership is:

If you lead an organization, what that organization does is ultimate on you. Don’t pass the buck, and certainly don’t ignore it. Take responsibility. Which looks like this: 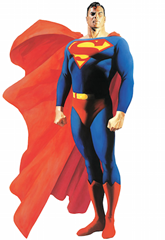 DC Comics has missed a real opportunity to impress readers. The general reaction to the comic panel has not been moral outrage. No one is crying for the heads of Lee or Didio or those of the writers Peter J. Tomasi and Keith Champagne. This is a low stakes issue. So why isn’t DC apologizing?

Yes this is embarrassing. Yes it may blow over in a month or two. But when a leader stands up and says, “I’m sorry. I made a mistake. It won’t happen again,” people pay attention. In this age of transparency, nothing goes further than a leader who admits they don’t know everything, that they’re not Superman, but that they’re willing to learn, to listen and to try harder.

We live in an age where institutions are still reluctant to admit fault. This is deadly to any institution.

Wherever you have influence, you’re going to make mistakes. So are the people who look to you for leadership. Don’t pretend it won’t happen. It will. So prepare to be honest. Apologize. Learn from your mistakes, admit them, and commit to doing better. You will earn the trust and respect of your people, which, ironically, is what most leaders who refuse to admit to their mistakes are afraid they’ll lose.

YOUR TURN: What do you think of Lombardo’s apology? Of DC’s silence?