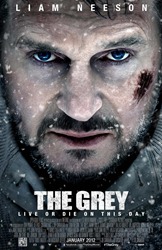 Though it’s billed as an action/suspense film, The Grey is really a philosophical musing on the nature of reality and our place in it. If we miss that, the film’s outstanding conclusion feels instead like major disappointment.

The Grey ends with Ottway (Liam Neeson) facing off against the Alpha wolf of the pack that’s hunted his party from seven men down to one. Ottway prepares himself to battle the wolf. The wolf lunges.

Quite the letdown – the whole film feels as though it’s been building to that confrontation. And then, nothing. Such an abrupt, uncharacteristic end is a major clue to the film’s overall message:

What matters is not whether Ottway will kill the Alpha, but that he finally quits trying to escape his reality and faces it head on.

Ottway kills wolves for an oil pipeline in the Arctic. It’s hard to imagine a less hospitable place – Ottway calls it the "end of the world", full of "men unfit to live among mankind." The film opens on Ottway nearly committing suicide. This is clearly a man who’s running from something. Through flashbacks, we learn that Ottway has fled to the End of the World to escape the pain of losing his wife to illness.

The plane crash and subsequent journey become a metaphor for Ottway’s whole life, and by extension for all of us who’ve experienced loss and pain.

Our world is The Grey of the Arctic: cold and inhospitable to human life. It is Nietzsche’s Void. 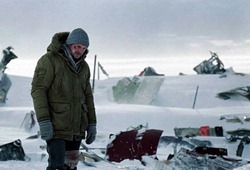 Like the men, we constantly search for some kind of escape, some rescue from the pain of our reality. In the film, the men collect the wallets of the dead to memorialize them. Before leaving the wreckage, one of the men asks for a moment to say a few words: clearly an empty gesture and meaningless in the face of the cold and the wolves, but it imposes some small measure of order on the chaos around them.

Religion can function like this too – rather than encouraging us to embrace the world as it is, to take responsibility for life in the present, we can use ritual and belief to shield us from the imperfect world.

We look for rescue not in the here-and-now, but in an Afterlife of some kind.

Though we know it’s not possible, we hope along with the men for some sort of rescue. A key moment in the film comes when Ottway, Diaz and Talget are the only three left. Diaz is injured, and rather than push forward, he collapses beside a river. Ottway and Talget implore him to go on. In perfect escapist fashion, Talget claims there might be a cabin just around the bend (of course, there’s not).

Diaz is adamant that he’s not going further, and when the three finally accept that he’s staying put, they have their first real, human moment. They take off their gloves, shake hands and offer their first names.

Their hope for escape had actually prevented the men from embracing each other as fully human. Abandoning their hope for something Out There brought them together.

For The Grey, religion does the same for us. We look to a God who is Out There, who will come to save us. Only a few moments later, Ottway is alone, his final companion having drown. Soaking wet, freezing and alone, Ottway finally cries out angrily to God, demanding that He break into the Grey and save Ottway .

This is the moment in the film where the Cabin should appear around the bend, or the Search Party that found the plane or a random helicopter. This is the point where God is supposed to break in and save us. 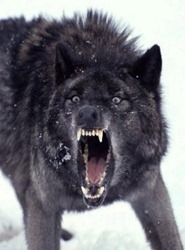 But nothing happens. Ottway is left alone with the Grey reality he started with. And when he realizes his journey has taken him straight into the wolves’ den, he too finally embraces his present.

As he prepares to battle the Alpha, Ottway calls to mind the single poem his father wrote:

In the End, Ottway finally quits running, quits trying to escape his reality. Like the death of his wife, like the pain we all face, the Grey is cruel and cold. But rather than look for some other-worldly escape, The Grey says we should find meaning in the present moment. That until we accept that no help is coming, that The Grey of life is all we can expect, we’ll miss the beauty and meaning that are right in front of us.

Instead of trying to flee from the Grey, Ottway fights it. Live and die on this day. 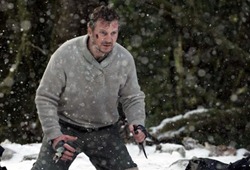 That’s why the film doesn’t show Ottway’s final battle with the Alpha. The outcome is predetermined – he is going to die whether he kills the Alpha or not. Death comes for all of us. What matters is how we face pain and death: either running from them or embracing them as part of what it means to be human. That’s what Ottway realizes beside the river, and what he finally acknowledges fully in the wolves’ den.

Ottway embraces his death. He quits running. That‘s the victory of the film.

The film embodies many of the same themes Peter Rollins outlines in his book Insurrection: God is not Out There, a deus ex machina who rescues us from reality. That we must find meaning and significance in our present by embracing it rather than always looking for a way out.

While I don’t agree that the World is essentially a cold, inhospitable place, the philosophy in The Grey is a helpful corrective to much of the Pop Christian Theology that promotes escapism and disregard for the created world. We should always be doing more to combat pain and Death in our present, not just waiting till "I’ll Fly Away".

YOUR TURN: What did you think of The Grey? Do you agree with the film’s assessment of the nature of reality?