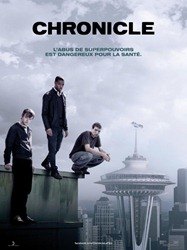 Chronicle is a (relatively) low-budget super-powers movie that got next to no publicity. Yet for about 10% of the cost of films like Thor and Captain America (both of which I enjoyed immensely), Chronicle told a more interesting and more important story than any super-hero film I’ve seen since The Dark Knight.

Chronicle not only told a better story, but told its story better.

Though three high-school seniors find the mysterious rock that grants them telekinesis, Andrew Detmer is the obvious main character. He’s the outcast at his school. He’s not goth, he’s not artsy. He’s just a normal kid with a  messed-up family who’s used to being mostly ignored (when he’s not being abused by his dad or bullied at school).

Andrew wants what we all want – to matter, to be significant. To be seen.

That’s why the found-footage style works so well: Andrew films himself in order to be seen. But as his powers grow, Andrew also feels more and more confident. His fatal flaw, however, is believing that his growing confidence and self-worth stem from his power. Through his deepening friendship with the other two guys – his cousin Matt and popular-guy Steve – Andrew is developing real community for the first time. 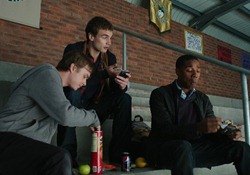 The Talent Show demonstrates the difference most fully. After his “magical” performance, Andrew is big man on campus. He rightly recognizes that the kids only like him because of what he could do. But he wrongly accuses Steve of the same sort of fair-weather friendship, not realizing that Steve’s self-deprecating turn as the clown sold Andrew’s magic act to the student body. Because of his own self-loathing, Andrew can’t see that since the accident, Steve has essentially abandoned his other friends to hang exclusively with Andrew and Matt. Instead of embracing Steve and Matt’s friendship, Andrew continues to hone his powers.

Andrew fundamentally misunderstands what makes us significant. It’s not power; it’s authentic connections with others. 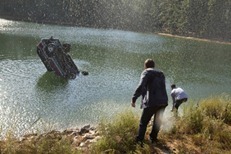 Because he can’t understand or embrace the genuine relationships offered to him, Andrew falls further and further. At first, his kills seem accidental – the driver tailgating them and Steve’s fatal flight – but soon Andrew embraces his identity as the Apex predator. Andrew notes that none of us feels bad for killing flies, so he shouldn’t feel bad for what he’s done (channeling Magneto?). Later, Andrew kills a spider, pulling it apart with his mind.

The scene is cringe-inducing not because we love spiders (we hate them more than flies!), but because we see what Andrew is becoming. 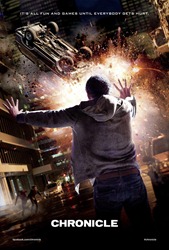 In the end, Andrew becomes his father. Richard Detmer is a fire-fighter forced into retirement because of an injury. A man who built his life on strength and heroics has been reduced to unemployment payments that aren’t sufficient to cover the medicines his dying wife needs. Rendered powerless by a system too big to fight, Richard takes out his rage on Andrew.

Andrew, too, has been the victim of too much for too long. Now that he has power, he uses his power to abuse all those who are less powerful than he is.

The real tragedy of the film is that Andrew becomes the very thing he hates most.

Ultimately, Chronicle is a morality tale. Which of us hasn’t felt powerless? Who among us has never been left out? Andrew’s response to his powerlessness is familiar at the personal and social level – this is why revolutionaries make horrible presidents.

Chronicle warns us that power is always dangerous – whether you have it or not.

Especially given that Chronicle didn’t work from previously successful comics material, the film’s command of the super-hero genre is marvelous. The best comics and comics films understand that super-heroes are our modern myths. We tell these sorts of stories to express what makes us human. That’s why Nolan’s Batman films have done so well – they’re really about fear and chaos and order more than a guy in a costume.

The best comics stories are the most human stories, and in that Chronicle succeeds at a higher level than most comics films in recent memory.

YOUR TURN: What did you think of Chronicle? Did you connect to Andrew? How does the film stack up to other comics films?