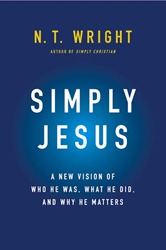 If you’ve never read N. T. Wright, you’re missing out on the greatest pastor and theologian alive right now. No other pastor is so respected in the academic world, and no other academic can write and speak so accessibly to those who don’t have the formal training of a seminary or graduate program. So when he published a book called Simply Jesus: A New Vision of Who He Was, What He Did and Why He Matters, I was excited.

In Simply Jesus, Wright has somehow distilled his academic study and pastoral experience of Jesus of Nazareth into a profound, challenging meditation.

Using the analogy of the Perfect Storm, Wright identifies three disparate storms that converge to make any discussion of Jesus precarious: Rationalistic Skepticism, the Conservative/Fundamentalist Christian reaction, and the actual, factual complexity of the "historical Jesus" questions themselves.

If anyone is equipped to captain us through this storm, it’s Wright, with his sharp academic mind and large pastoral heart. 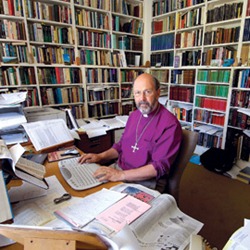 From the midst of this Perfect Storm, Wright asserts that

There emerges a sense, which is central to the New Testament itself, that Jesus’s way of running the world here and now is, however surprisingly, through his followers.

Wright rightly begins with how poorly we all understand Jesus today. He observes that asking what Jesus was really about

…Isn’t about “religion” in the sense the Western world has imagined for over two hundred years. This is about everything: life, art, the universe, justice, death, money. It’s about politics, philosophy, culture, and being human.

He takes us back into the first century and introduces us to the world of Jesus: under the heel of the Roman Empire, but totally saturated in the Hebrew Scriptures. Wright teases out a picture of the Hebrew Salvation story, grounded in the Exodus, centered on the Temple and having survived the Exile.

Wright introduces us to various religious and political leaders who lived both before and after Jesus, showed how the Exodus paradigm shaped their actions and the beliefs of their followers.

Wright masterfully paints a clear picture of Jesus’ Israel that provides compelling context for Jesus’ own understanding of his mission and activity. 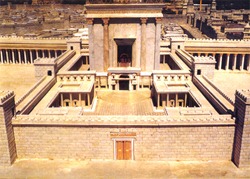 Wright then moves into Jesus’ actual life and ministry. (Those skeptical about how Wright handles the Gospel materials would do well to explore his more academic works. In Simply Jesus, he assumes you’ve either done your homework or that you trust his.)

Investigating Jesus’ teachings and activity within the context he established, Wright demonstrates that Jesus saw himself as the replacement for the Temple, as the culmination and fulfillment of the entire Jewish story to this point.

The best historical analysis we can offer of what we can only call Jesus’s “vocation” is that he believed, through his prayerful study of the scriptures and his reading of what he himself called the “signs of the times,” that the full force of this great combined river would accomplish the purposes for which Israel itself had been called in the first place; and that it would do so in him, in his willing obedience to this vast and terrifying purpose. Israel’s God had promised to return and establish his kingdom. He would do this in and as the Messiah, the servant. In and as Jesus of Nazareth.

For Jesus, and for us, his vocation had far more than just "religious" implications:

The whole point of Jesus’s public career was not to tell people that God was in heaven and that, at death, they could leave “earth” behind and go to be with him there. It was to tell them that God was now taking charge, right here on “earth”; that they should pray for this to happen; that they should recognize, in his own work, the signs that it was happening indeed; and that when he completed his work, it would become reality.

At every step, from his baptism through the cross and resurrection to the ascension, Wright engages Jesus’ life and teachings, demonstrating how Jesus’ every action, every word, pointed towards fulfilling this vocation Wright has sketched out. 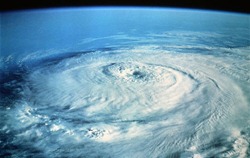 The book concludes with an outstanding reflection on what it means to say that Jesus is King today, what it means to live in the time between Jesus’ ascension and the Second Coming. Here Wright’s discussion of Heaven and Earth not as two separate physical places, but as overlapping (but not yet joined) modes of existence is particularly helpful.

In the end, Jesus’ rule is lived out through his Church. We are responsible to bear witness to the reign of Jesus. In every nook and cranny of our culture.

In between resurrection and ascension, on the one hand, and the second coming, on the other, Jesus is the one who sends the Holy Spirit, his own Spirit, into the lives of his followers, so that he himself is powerfully present with them and in them, guiding them, directing them, and above all enabling them to bear witness to him as the world’s true Lord and work to make that sovereign rule a reality.

Wright calls us to ground our kingdom-living in worship, prayer and Scripture. But it can’t stop there. Just as Jesus’ ministry was, our vocation is to be lived out in public. Wright’s vision of what the Church could be is exciting and energizing. By the end of the book, I was underlining every sentence, restraining myself from jumping up and cheering.

Bottom Line: An accessible, exciting and enlightening book, Simply Jesus is a must read for anyone trying to take seriously what it means to follow Jesus today.