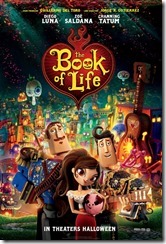 The Book of Life may be the most beautifully animated film you see this year (it would be an act of cruelty to ask me to choose between it and The Boxtrolls, and they’re different enough to frustrate comparison). Directed by Jorge R. Gutierrez (who also co-wrote the screenplay), the film centers around the Dia de los Muertos, the Day of the Dead.

The Book of Life is an outstanding film that excels on multiple levels. To watch is to witness deep storytelling that draws on a number of themes, ideas and influences to tell a powerful tale that is at once deeply embedded in Hispanic culture and still universal.

The Book of Life is a film whose time has come. It offers the Hispanic experience as an essential aspect of American identity, one full of promise for our way forward. 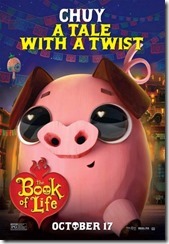 Before it can do any of that, The Book of Life must work as a story. And in this it succeeds marvelously. It’s funny, quick and intelligent. Though it’s a love story, it’s not just a love story, and it avoids many of the tropes even animated comedies often fall into (the way the love triangle among the three main characters resolves is really excellent).

The Book of Life is one of those movies that if you “turn your brain off” and just watch, you’ll still deeply enjoy. As a rule, I discourage this sort of viewing, but it’s nice to see a film that works at least on this level. The story is coherent. The characters have discernible arcs. The conflicts are reasonable and relatable (and nearly none of it comes from the film’s only real “villain”).

Thematically, the story plays with friendship, the rivalry between strength and art, the meaning of heroism, the tension between family legacy and individual ambition, the place of violence and of course the power of Love. That’s a lot of balls to keep in the air, but The Book of Life doesn’t bobble them once.

What makes The Book of Life great, rather than merely good, is how seamlessly these are woven into a coherent tale. But I can’t say anymore without spoilers. So here goes…

Spoilers for The Book of Life after the jump 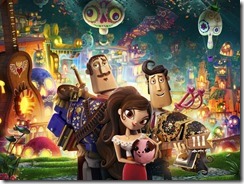 The Book of Life is set in the town of St. Angel, “in the heart of Mexico, which is the center of the world,” as the narrator describes it. St. Angel being the center of the world, it sits atop the Land of the Remembered, an endless fiesta for the dead who’re remembered by the living. The Land of the Remembered is ruled over by La Muerta, while her spouse Xibalba is relegated to the Land of the Forgotton. (Xibalba is also the name of the Mayan underworld.) Two boys grow up in the shadows of their fathers, while competing for the heart of one girl, Maria (Zoe Saldana).

Manolo Sanchez (Diego Luna) has a musical soul, but is the last in a long line of famous Mexican bull-fighters, and expected to follow in his father’s footsteps. Joaquin is the son of a famous (and deceased) warrior, who died defending St. Angel from Chakal, a terrifying bandito who still haunts the countryside.

The story opens on the Day of the Dead, when Manolo is remembering his mother and Joaquin his father. La Muerta and Xibalba, who’s tired of ruling over the Land of the Forgotten (where no fiestas are ever had) wagers that Joaquin will win Maria’s heart. La Muerta takes the wager and backs Manolo, and the story is off. 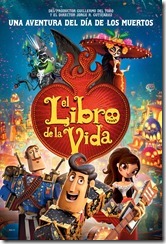 The Book of Life is thoroughly Hispanic.

Much of the Day of the Dead iconography is introduced with no explanation for non-Hispanic viewers. What little mythology we’re given at the opening of the film is enough to orient us to the characters and no more. And yet the clearly religious rituals are at once Catholic and Mayan, unapologetically showcasing the syncrinicity that is at the heart of Hispanic Catholicism (the priest who becomes a luchador for the final battle with Chakal was a nice touch as well).

The film’s family dynamics are also quintessentially Hispanic: when Manolo descends to the Land of the Remembered, he’s reunited with his mother, his grandfather and his uncles, cousins and more – the entire Sanchez family. Their dynamic is pitch perfect, from the strong matronly figures to the machismo men.

Though her arc is probably the least compelling, Maria is also the strongest character in the film. While the men around her repeatedly talk about her as a possession – they’ll “win” her, they ask her father to marry her, etc., Maria at every turn is her own woman. She refuses the romantic ploys both men use to win her affections, and she clearly loves them both, but doesn’t toy with them.

She is a strong leader who also shows a willingness to put the common good ahead of her own desires. And her speech, rallying the town to the final battle with Chekal is excellent.

Maria is a strong female character in a film that uses her to critique traditional gender roles.

Manolo wants to be a musician, but according to his father, that’s not a “pursuit worth of a Sanchez man.” Manolo is torn between the Sanchez legacy and his own desires. When he refuses to finish the bull (a rather clean euphemism for killing it), his father disowns him, declaring, “You’re no Sanchez.” His deceased relatives are similarly incredulous at his unwillingness to participate in their legacy. When one of them remarks that “All Sanchez men are bullfighters”, Manolo’s mother, Carmen, snarkily observes, “That’s why there are so many of them down here.”

Manolo isn’t afraid to kill bulls; he’s afraid that being fully himself means he’s not a true Sanchez. That being an artist isn’t manly. 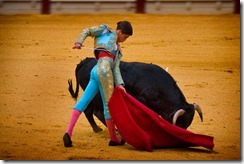 Even in the Underworld, among the dead, Manolo can’t bring himself to kill. Instead, he offers up an apology, directly from his heart, to the bulls. He aplogizes for the centuries of violence the Sanchez men have rained down upon them in the name of masculinity, of entertainment, of pride. He mourns with the bulls over their senseless deaths and offers up a promise to be better moving forward.

Manolo’s apology turns the memory of the violence against the bulls into dust, and his family acclaims him as the greatest Sanchez of all. The apology is more than an easy narrative out. This too, cuts to the heart of the film’s Hispanic heritage. Near the core of Hispanic identity is a paradoxical violence: Hispanic culture is birthed of the legacy of conquistadores bearing swords. Much as the Day of the Dead, Hispanic culture is a syncretism of European Spanish culture and values with the native peoples those Spaniards conquered. 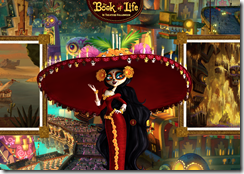 The USAmerican experience is substantially different: when we conquered the native peoples, we sequestered them, relegating them to reservations. The level of influence on the British and French cultures is markedly less than the Triple Alliance (Aztec) and Mayan cultures had on the Central American Spanish colonizers.

As a result, Hispanic culture today is much more ambivalent toward violence and the accompanying machismo than white USAmericans tend to be. The Book of Life offers love, self-sacrifice and apology as legitimate alternative to violence. Manolo is courageous, intelligent and victorious. In choosing a path that eschews violence, he doesn’t demean his heritage, but redeems it. He ends the cycle of violence that cost his ancestors their lives, imagines a better way forward, and then calls it into existence. 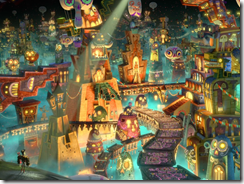 As a gringo watching The Book of Life, I was struck by how USAmerican the film is. For all the Hispanic culture, this film is in English (with Spanish peppered liberally throughout). This was done most creatively in the soundtrack. As Maria departs for Eurpoe, Manolo declares he will wait for her in song. The song? A Mariachi verson of Mumford and Sons’ “I Will Wait”.

Only a bit later, Manolo again expresses himself through song – this time with a Hispanicized Radiohead’s “Creep”. And still later, he serenades Maria with none other than Elvis Presley’s “Can’t Help Falling in Love”, once again reimagined for a mariachi player. 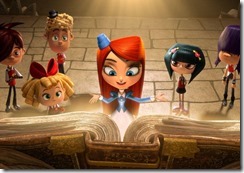 The story of Manolo, Maria and Joaquin is told to five very white kids on a field trip to a museum (they’re observed to be on the ‘detention bus’). La Muerte and Xibalba (in disguise of course), introduce white American kids to this very Hispanic story such that it becomes their story. These kids who are disillusioned with the culture in which they find themselves find themselves a bit more whole through an act of remembrance. They are folded into the story of St. Angel and its people. They participate in the Day of the Dead, and so become more whole.

Such is the promise of the Hispanic experience in the USA.

The Book of Life is an invitation to the rest of America to listen to the Hispanic experience, to learn from its unique heritage and rich traditions, and to grow, to become more whole as we become more diverse.

Perhaps we can learn from a culture more honest about the violence that troubles it (rather than cling to a mythic innocence even as our police forces stockpile billions of dollars of military-grade weaponry). Perhaps we can learn that an earnest, heartfelt apology coupled with a demonstration that we will be different will go further than blindly clinging to the imagined glory of our past (a glory that stubbornly ignores the pile of bodies it cost).

Perhaps we owe it to our Hispanic neighbors to sit and listen to their stories. Perhaps we’ll find their stories are our stories too. That though we dress our cultures up differently, in the end we are all human. We all struggle with the tension between legacy and ambition. Between friendship and love. We all wonder if violence might be a necessary evil, even as we hope love might be a better way.

The Book of Life is a Hispanic story. But it’s an American story. And I saw plenty of my own story in there. I bet you do too.

The Book of Life is outstanding. It’s a little manic, and gringos like me probably can’t help but feel a bit like outsiders, especially when we watch the Day of the Dead celebrations and poor Manolo in the midst of his extended family. But no matter who you are, you will find something familiar in this film.

We may not be ready for Book of Life. But as our culture becomes more and more Hispanic, stories like this will help us navigate into a healthy future, where every culture is bettered by our encounters with the Others. If Book of Life doesn’t work now, it’s just ahead of its time.

BOTTOM LINE: The Book of Life is an excellent story that demonstrates how much the Hispanic world has to contribute to the American experience. Plus, it’s just a lot of fun.

YOUR TURN: What did you think of The Book of Life?