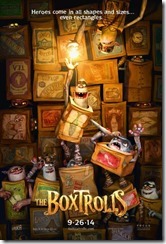 I’m beginning to suspect Laika Entertainment’s films aren’t for everyone, though for the life of me, I can’t figure out why. I don’t know anyone who’s seen Coraline or Paranorman and didn’t enjoy them (in fact, how Brave beat out Paranorman for the Best Animated Film Oscar in 2012 still baffles me). One look at The Boxtrolls first trailer made it clear Laika was back, and with a movie that looked to be their weirdest yet.

Laika films tend to be dark, creepy, beautiful and poignant. The Boxtrolls is no exception.

Technically, The Boxtrolls is a masterpiece. The stop-motion animation is gorgeous and intricate. Laika, helmed by CEO and lead animator Travis Knight, continues to push the boundaries of what animation can do, and The Boxtrolls is a visual feast (check out this interview with Travis).

The Boxtrolls is set in an absurd Victorian town that’s essentially a giant tower called Cheesebridge. And yes, they’re obsessed with cheeses of all kinds. Cheesebridge is ruled by Lord Portley-Rind and his oligarchy of White Hats. The White Hats are the envy of all, but especially of one Archibald Snatcher. Snatcher’s complicated, elaborate scheme to earn a white hat drives the film’s plot, which revolves around a young boy raised by Cheesebridge’s other inhabitants, the titular Boxtrolls.

Everything about The Boxtrolls is gloriously, hilariously absurd. It’s pitch-perfect tone that makes the subversive crtique go down oh-so-smoothly.

Snatcher is a villain for the ages, and his henchmen are some of the most enjoyable side-characters in any animated film. Mr. Trout and Mr. Pickles’ philosophical musings on the nature of good and evil, their role in the world and reality were hilarious asides I couldn’t believe I was hearing in an animated film.

And can we talk about those Boxtrolls? Their world was beautifully rendered, painstakingly thought out and completely compelling. I was almostly instantly lost in their world. (This even though Cheesebridge doesn’t make a lick of sense – what sort of economy do they have? Where is the industry? What do these people do when they’re not pining for cheese? Where did the Boxtrolls come from? It doesn’t matter. 30 seconds into the film, you won’t care.) Within minutes, the Boxtrolls are almost painfully adorable (which sets up the “humans are the real monsters” theme beautifully).

But what makes The Boxtrolls works is that it’s not actually about any of this. It’s just a great story that touches on all these themes without preaching them.

I don’t know why Laika films aren’t raking in awards left and right. Why their boxoffice performance is consistently lower than it should be. Their films are great, and The Boxtrolls is their best yet. Do yourself (and Laika) a favor and go see this one in the theaters. You’ll want to experience the world as richly as possible, and I highly recommend big and loud to do so.

BOTTOM LINE: The Boxtrolls is an excellent film that’s sure to land in my Top 10 of 2014. Beautiful, rich, funny and weird, you won’t see anything else like it this year.

YOUR TURN: Are you going to see The Boxtrolls?