First of all, here’s the best summary of the film I’ve found. It’s hilarious and dead-on. 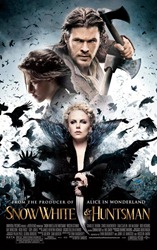 From the first trailer for Snow White and the Huntsman (SWATH), I was hooked. The ads promised a dark, fantastic reimagining of the story. Shelve it next to Lord of the Rings, not Little Mermaid or Aladdin.

SWATH‘s visuals promised a powerful, poignant fairy tale for a new generation. Unfortunately, the story failed to realize this promise.

Confession: I love fairy tales. When told well, fairy tales function a lot like myths: the characters tend to be archetypal, and they explore fundamental human issues. A good fairy tale is so much more than just a kids’ story.

The original Snow White story, for instance, was a warning against vanity and envy. It also celebrated the triumph of innocence and Beauty over jealousy and evil.

The new film tried to tell a story about a woman’s plight in a man’s world. It tried to critique the use of beauty as a weapon. SWATH could’ve been a retelling we needed to hear.

The ideas are fresh, interesting and timely. But the film fails to deliver.

SWATH really revolves around the Evil Queen/Step-Mother (a magnificent Charlize Theron). She’s easily the most interesting character and, in this version of the tale, a full-blown evil witch. Through an ill-placed flashback, we learn that her power literally comes from her youth and physical beauty (apparently the same thing).

The Queen openly hates men. Apparently, she’s been the victim of powerful men – exactly how is never revealed. So her life mission is now to destroy the power of men, to victimize those who’ve victimized her. In her quest, she’s conquered kingdom after kingdom. And how is she able to overpower all these powerful men? With her matchless beauty.

Because her Beauty is her power, the Queen’s hatred of Snow White makes sense: if she’s not “the fairest of them all”, she’s not the most powerful.

Here’s where the film had the chance to be really clever. It almost became a critique of our cultural obsession with youth and beauty. Because the Queen understands Beauty as a weapon, Beauty is a zero-sum game. She stays young by stealing youth from young women in the kingdoms she conquers. The Queen is literally more beautiful the less beauty there is in her kingdom.

The Queen even occasionally actually uses her Beauty as a weapon. Playing Damsel-in-Distress and tricking Snow White’s dad into rescuing her from the army she created is a wonderful subversion of an old fairy tale trope. But this is an exception, not the rule, which makes me think it’s a happy accident rather than clever writing.

If this Beauty-as-Power theme had been more thoughtfully executed, the film would be a new classic. But the Queen’s power never quite makes sense. Why does she age when she uses her power? Why does she have to choose between being beautiful and magical? And if her mom gave her the power when she was little, where did her mom get it from? And how did she learn to use it? And if she had the power when she was so little, how did she still get victimized badly enough to hate men?

And how could someone more beautiful than her undo her power?

That’s the real question that’s never answered, and the most damning hole in SWATH‘s attempt to tell a compelling contemporary fairy tale. The film had the chance to critique our understanding of Beauty. Our culture clearly thinks of Beauty as a purely external, quantifiable characteristic, just like the Queen does. For us, Beauty=Youth, and we’ll do just about anything to look like a 20-something.

What we needed in the film was a heroine whose Beauty was primarily a function of her character.

We needed a Snow White whose innocence and purity would rally allies to her. We needed an inner beauty so compelling that it pulled Evil Queens from their thrones. Instead, we got a timid, weak, lip-biting Snow White (boring, flat, totally uninteresting Kristen Stewart) whose only attribute seems to be that she’s younger and prettier than the Evil Queen.

We needed a story that tells us that a universe that reduces female power to a beauty contest is running by the wrong rules. We needed a film that subverts the idea that “the fairest of them all” means “the person who most looks like a 20-year old with a killer body”. We needed a heroine who’s fairest because she’s Good and Kind, whose character, not countenance, inspires Love and Loyalty.

SWATH gave us none of that. Instead, Snow White is just prettier. So she wins. That story only props up the Beauty Culture the film should’ve critiqued.

Instead of an Evil Queen whose hatred for Snow White arose from her misunderstanding of true Beauty is, we got a woman who’s legitimately angry that she came in second in the beauty contest. In the story universe SWATH established, it’s not clear the Queen is wrong.

For no good reason – other than her physical beauty – two men love Snow White. A troll refuses to kill her. An army follows her to storm an unstormable castle. Aslan A magic stag gives her a blessing? She kills the unkillable Evil Queen. And she… heals nature… somehow. And none of this because she’s kind or good. Not because of any inner beauty at all (that would require acting from Kristen Stewart).

Apparently, Snow White wins just because pretty girls get what they want.

And that’s a huge problem. Because she’s the obvious bad guy. But without a clear critique of Beauty Culture, the Evil Queen is right – all that really matters is being the prettiest.

That’s not a message our culture needs to hear. We’ve got enough of that already. That’s why, in the end, the stunning visuals are the only actually modern aspect of SWATH. The story the film tells goes beyond unhelpful to the realm of harmful and backwards. Instead of undercutting and subverting the Beauty Myth, the film actually argues for it.

Bottom Line:  The abominable dialogue and conceptual shortfalls keep this Once Upon a Time from living Happily Ever After. And that’s a shame.

YOUR TURN: Did you like SWATH? What did you think of the film’s message?