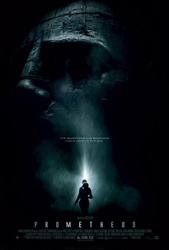 Unsurprisingly, Ridley Scott’s sort-of prequel to his 1979 classic Alien is a smart sci-fi movie with much more going for it than just visceral terror (though there’s plenty of that). Prometheus asks questions about faith, human origins and the limitations of science.

As the best sci-fi does, Prometheus makes us stop to wonder why we ask those questions.

Set in 2093, Dr. Elizabeth Shaw (an excellent, tough Noomi Rapace) has discovered proof that humanity was created by a race of aliens they call the Engineers.

Shaw convinces gajillionaire Peter Weyland (Guy Pearce) to spend over $1 trillion to send them to the Engineers’ planet. Weyland’s daughter Meredith Vickers (chilly, awesome Charlize Theron) and Weyland’s greatest creation – the android David (somehow both endearing and creepy Michael Fassbender) – embark as well, with the near-death Weyland himself stowed away in cryosleep.

As the mission unfolds, the characters’ motivations for coming aboard Prometheus drive the meticulously unfolding horror.

Weyland wants immortality. In his TED Talk from 2023 (a nice piece of viral marketing), Weyland states that Prometheus stole technology (fire) from the gods and gave it to humankind. Thanks to the inevitable advancement of technology,

We are the gods now.

Despite Weyland’s early optimism, he is near death. His religion – technology – hasn’t been able to save him from Death. So he’s set out to find humanity’s makers. By finding these Engineers, he hopes to learn how to transcend his humanity by defeating the last human enemy: Death itself.

Weyland’s quest is the religious quest. Death is our great enemy. Much of what we call religion deals closely with how we engage the finality of Death.

Weyland wants to become a god by cheating Death. He wants to remain on his throne forever. His daughter, Vickers, points out the hubris of his quest. Channeling Ecclesiastes, she warns Weyland of his folly in the film’s most haunting line:

A king has his reign.

While Vickers’ words are true, she speaks them not with wisdom, but envy. She has come to ensure that her father won’t succeed. Vickers wants control of her father’s empire. Like father, like daughter: the same pride that drives Weyland drives Vickers. Her time to rule is at hand.

Weyland’s other child is David. David truly is a mandroid after his creator’s own heart. He shows the same disdain for his creator that Weyland clearly does for humanity’s own gods. As insidious and secretive as David is, he’s clearly following in his maker’s footsteps, even as he seeks to destroy humanity. David wants to replace his gods, just as Weyland did.

Religious questions attract the rich and powerful because religion can easily be used to prop up their agendas. Weyland, Vickers and David all embody that first sin – Pride: the desire to become gods ourselves.

In contrast to the Weyland clan, Elizabeth Shaw demonstrates the Good religion can inspire in us. Shaw is a confessing Christian, and though others in the film wonder how her belief survives her discoveries, Shaw never seems the slightest bit conflicted.

(In fact, I’d have loved to see this theme developed further. It’s refreshing to see a Christian character who doesn’t see faith and science at odds.)

Shaw never quits asking questions even as the unfolding horror takes terrifying tolls on her body, mind and soul. Her convictions enable her to become the Christ figure: bearing in her body the wounds of her makers and suffering to save her people.

And as her ultimate reward, she’s swept off into the Heavens to meet her gods. Of course, we have to wait for the sequel to see how that turns out.

In contrast with the Weylands, religion makes Shaw a supremely good, sacrificial savior.

So, in the end, humanity turns out to be just like our gods, as far as we can tell. Some of us are good, some of us are not so good. And some of the Engineers wanted to wipe us out, but others sacrificed themselves to create life (according to the opening sequence).

If that all sounds a little bit muddled, it’s because it is. As one reviewer observed:

Prometheus intentionally does not answer all the big questions it raises. It can’t – the answers have yet to be discovered. — Angela Watercutter via Wired.

Maybe the real takeaway for me is that you are what you worship. And I’d rather end up like Shaw than Weyland any day of the week.

And don’t worry. The film’s not all high-brow, philosophical musing. It’s unbelievably tense, and features what one writer has called the most important horror sequence of the year. If you’ve seen the film, you know the one.

The only real problem I had with the film was the plotting. The characters seemed bound and determined to make the worst possible decisions. And Star Trek‘s First Contact protocols are about a billion times smarter. But I was willing to overlook these (many reviewers obviously weren’t) for such a gorgeous, horrifying and thought-provoking film.

Bottom Line: Horrific, beautiful, suspenseful and profound. You almost never get all that in a sci-fi film.

YOUR TURN: What did you think Prometheus said about faith? About human nature? Did you like the film?