I am the worst kind of reader. I’m surly, demanding, impatient and unforgiving. I’m picky. I don’t particularly like non-fiction. I want to be entertained, but I also want the book to be important. To mean something. I need it to be not just competently written, but catch-your-breath-because-it-is-beautifully-written.

So it’s a startling irregularity when I read not just one, but two books in a row that I enjoy, inhale, devour, adore. Both of these books have lingered with me after I turned the final page. 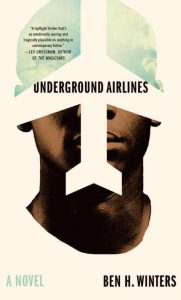 Let’s start with the first, an alternate history thriller by Ben H. Winters. The first book of Mr. Winter’s I read was The Last Policeman, a near future hard-boiled mystery novel about a detective looking to solve a murder before an asteroid hit the Earth, destroying humanity. It was a great read: literate, confident, and moving without embarrassment through the genres it inhabited.

I started reading Underground Airlines after JR. Forasteros kept mentioning how amazing it was, over and over.

He was, of course, correct.

Underground Airlines is, at heart, a thriller. It takes place in an alternate history, where the United States has not quite managed to get rid of slavery. There are four states still holding on to their Constitutional right to have slaves, and though there are slaves and masters, abolitionists and politicians, slavery remains wound up in the politics, finances and culture of the United States.

The story follows Victor, a black man who works for the US Marshall Service catching and returning runaway slaves. He’s trying to infiltrate the so-called “Underground Airlines” in an attempt to find one such slave, known only as “Jackdaw.” But something is wrong with this case, something bigger and more sinister than the current state of slavery in America. There is a government conspiracy in play, trying to hide a terrible secret at the heart of the already terrible reality of the legal plantations.

It’s a gorgeous book. I stayed up too late trying to finish it, and woke up too early to actually finish. It’s a page turner, a character study and a mirror all in one. Beautifully written and accomplished. I loved it. Is it clear yet that you should read this book?

One of the most powerful philosophical concepts that comes across in this book is just how close to slavery we still are. In this alternate America, where we see how black men in particular are treated in the “free states” it’s both shocking and absolutely logical how near-identical it is to the experience of black men in the United States today. Better yet, it’s not just a philosophical construct, the narrative makes you feel it.

I highly recommend it. Here are links to where you can buy it (followed by book recommendation #2 and then some closing thoughts). 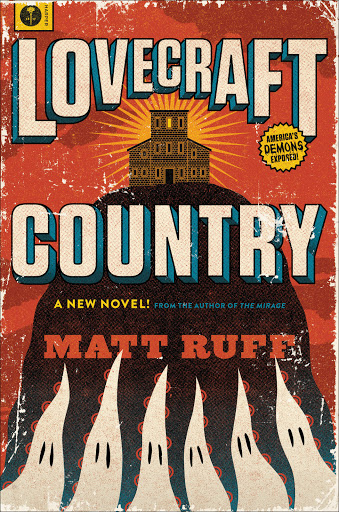 I became a fan of Matt Ruff after reading his brilliant novel, The Mirage, which is an alternate history in which the roles of the United States and the Middle East have been flipped in nearly every conceivable way… Christian fundamentalists fly a hijacked plane into the World Trade Center in Baghdad. But captured terrorists are all telling a strange story, about how that world is a mirage and that the “real world” is one in which the United States is a superpower, and the terrorists are coming from the Middle East, not the west….

Just like The Mirage, Lovecraft Country beautifully balances an emotional story with things that are causing enormous emotional distress in our culture today.

Basically, Mr. Ruff takes us into the racist roots of science fiction and horror, targeting one of the more overtly racist kings of the genre, H.P. Lovecraft. Probably most famous for creating the sleepy elder god of terror, Cthulhu, Lovecraft was also known for “Dirty Harry” style racism: he hated “them all.”

Basically, Lovecraft Country takes us to a world where all the cults, magic, forbidden knowledge and interplanetary terror of Lovecraft is true, but there are actual three-dimensional black characters inhabiting that world in addition to the white upper class people common to Lovecraft’s work.

Atticus Turner’s father has been kidnapped by a group of cultists called the Order of the Ancient Dawn. Atticus and his family are determined to find and rescue him, no matter what stands in the way: white supremacists, ancient terrors, alien beings or ghosts.

The novel is told through a series of stories and points of view, giving us main characters who are old and young, men and women, determined to overcome or trying desperately to fit in. It’s smart, entertaining work with absolutely flawless writing that reveals a deep knowledge of both speculative fiction and race relations in the last seventy years in the United States.

It’s amazing how deep the waters go as Ruff deals with shifting identities, the nature of power, blood guilt, blood power, privilege and fear. So much of the tension in this novel comes down to experiencing what it feels like to be a black person in 1950s America. There is terror, resignation, fear, anger. And the ending was absolutely, unquestionably, spot-on perfect.

Neither this book nor Underground Airlines are preachy: they’re both profoundly moving, thought-provoking and enjoyable (sometimes difficult given the topics) reads.

I’ll close with this.

It’s hard to avoid the fact that I, as a white man, found these two books about the black experience (in speculative worlds) written by white men to be profoundly moving and, in the end, entertaining. Which brings up the question of whether one should be entertained by stepping into, for a few hours, the daily painful reality of other people… my friends, neighbors, countrymen and women who live this day in and day out.

It’s hard, likewise, to avoid the fact that yes, there are going to be people upset that there are books by white men getting a lot of attention while inhabiting the stories of black people. That’s a fair point. And there are great, great novels by black men and women about the black experience you should read. Some are even speculative fiction, like these two (Octavia Butler is amazing if you haven’t read her) and some aren’t (I love Percival Everett’s work, for example).

At the end of the day I can only say that part of the joy of fiction is inhabiting the experience of people who are different than you: learning their world, their challenges, their triumphs and pain and wishes and hopes. No one is going to read “Underground Airlines” and think “well, some slaves probably liked slavery.” No one is going to read “Lovecraft Country” and think “oh if black people put their hands on the steering wheel there would never be a problem with police officers.”

Did Winters and Ruff get it all perfect? I have no idea. That’s not for me to say. I will say this: these are two great books and we need more like them.

What do you think? Have you read either of these books? Other recommendations?