My toddler is obsessed with Moana. For those of you unfamiliar with the affectionate attentions of small children, this means we watch Moana a lot. We are not a television family by nature (I prefer to get my news and entertainment mostly from the radio), but, of what little we do watch, Moana dominates.

That said, it took me awhile to see Moana end to end. The toddler interest is intense, but not necessarily steady. Often, the story line was broken up by requests for milk, sessions of chasing after our cat, repeated trips to the front windows to imitate the sounds of passing vehicles. 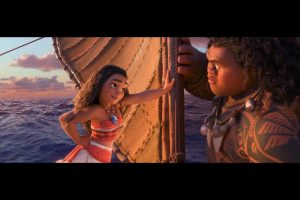 When I finally got the whole story, I was pretty impressed. The animation is gorgeous, especially considering how much of the movie takes place on the ocean. I love the fact that Moana’s struggle is not about whether, as a girl, she can be the legitimate chief of her people, but what direction that leadership should take. How can Moana balance a respect for tradition with her desire to explore? Moana’s journey of self discovery is informed and directed by the mythology of her people. Moana meets gods, demigods and monsters. She reaches destinations that only appear in the stories her Grandmother tells her.

There is a strong environmental message in the story. The earth has been deprived of its generative powers by trickery and might. As a result, the ecosystem of Moana’s home is faltering and failing. Her task is to restore the fertility of the earth. Without giving anything away, Moana successfully restores her world (Disney movies always have happy endings). As a person who is concerned about climate change, my initial reaction was dismissive: “Pshaw! If only it were as easy as facing a monster to fix the planet!”

But then I reconsidered. Moana’s path was not easy by any means. She had to overcome many obstacles, albeit mythical ones. The mythical path that she followed was an accurate depiction of what it might actually take to turn the environment around: resolve, risk, skill, time, strength. The monsters, heroes and deities were ways of talking about a undertaking so large and important that otherwise, we might not have the courage to talk about it at all.

Although I was raised a Christian, I had not practiced my faith in many years. In fact, I have not believed in the supernatural in many years. Some of the reasons for this are personal. But overwhelmingly, the reason I no longer believe in God is that I find philosophy to be sufficient. When my father died, it wasn’t faith that consoled me, but thinking through and discussing the complexities of the human condition. I accept that every phenomenon has a natural and logical explanation.

Now that said, I also believe that some experiences are of a degree of intensity or scope that their logic escapes us and we are overwhelmed by them. We find ourselves caught between mysterium tremendum and mysterium fascinans (terror and fascination). Thankfully, this does not happen often. If it did, we would be insufferable basketcases and not get many invites to parties.

So, we set many of these things aside as sacred. We wrap them up in cushions of symbols and rituals so that crossing towards them, we are given warning to expect something WOW. More than that, by interacting with the symbols and rituals, we are in someway preparing to participate in their wonder. This may be achieved through instigating reverence, for example, sacred music and architecture. But symbols and rituals also provide us with a vocabulary for describing things we otherwise find indescribable. Ineffability, or indescribability, is a key characteristic of human religious experience.

I affirm the validity of human religious experience, but I would argue that the heart of religious experience is a confrontation with our mortality not with the supernatural. We confront not only the fact that we will at some point cease to exist, but that, in the totality of what exists, our existence feels insignificant.

From the above, it’s obvious that I do not believe in an immortal soul. However, I do think that it is understandably human to believe in the immortal soul. Humans are pretty strange as conscious beings go. We have an acute sense of our position within the world that may be unique in the animal kingdom. Also, we have the very weird experience of waking up in our own lives already begun. Humans develop a sense of self between 18-24 months (my son just got his). Our earliest memories are usually even later still. The first thing I remember is when I was 3 and it is more a sense of impressions than anything else. But whether we have actual memories or not, we know that we existed, moved around, ate, slept, cried, laughed before we were aware of doing so. If I existed before I was consciously aware of my existence, then it seems natural to argue that I might exist after my consciousness and organism permanently part ways. I don’t think it’s a convincing argument but I understand how and why it is made.

Oddly enough, I didn’t feel excluded from religious practice on the basis of my philosophical conclusions. Rather, it was the character of my Christian upbringing that posed the most serious obstacle. I was raised in a Fundamentalist Evangelical church. I was raised thinking that the stories in the Bible were real in the most literal sense. I was also taught that the truth (and reality) of Jesus Christ was evident and logical. People who did not accept Christ were denying what was self-evident.

Writing those sentences above, I am filled with all kinds of grief. Hurt caused to me in the cause of Biblical literalism. Hurt that I caused to others defending it. Hurt caused by its current adherents to themselves and others. I have a suspicion that the recent and erroneous assertion that there are “always facts on both sides” is directly linked to the cultural impact of Evangelical Fundamentalists in America. By insisting that their interpretation of religious truth was in fact demonstrably real, they have engaged in kind of magical thinking that is now costing the nation its integrity.

Cultural commentary aside, I felt disqualified from participating in a tradition that I have a devout affection for because I felt on the hook for no longer believing in existence of the supernatural. In other words, how could I possibly be a sincere Christian if I no longer believe that God is a literal person or that Jesus of Nazareth is literally the son of God?* 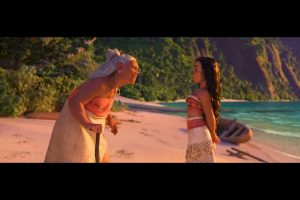 The question of whether what exists and what is true are coextensive (completely overlapping) also shows up in Moana. Even as Moana’s grandmother inspires  her with stories of heroes and monsters, Moana’s father, insists that these personas aren’t real. Later, he discourages Moana from her quest again with the charge that the tokens of her mission are not real. However, Moana’s belief in the truth of her grandmother’s stories, along with the ritual symbols and songs, are what guide her to act in the world to the benefit of her whole community. What made Moana’s struggle valuable was not whether the stories were in fact really real. It was that she dared to live out the truth embedded within them.

Watching Moana (for the umpteenth million time), I realized that in the same way that Moana’s mythology could speak truth about how she might restore the balance of the ecosystem and find a path legitimate towards leadership, the Christian symbols I had received as a girl could equally speak truth, as I understand it, about the human condition. Within Christian ritual, I could find a place and time to meditate and reconcile myself to those truths. Or perhaps, even more importantly, I could have a shared conversation about the most important things in life within the sanctuary of Christian tradition. And understanding one another, I could join with others in action for the good of our community.

Human beings are symbol makers: language, art, music and yes, religion. We have so much to think and feel and do, that we assign symbols, especially when the truth we are trying to convey escapes our normal modes of communicating. Truth is ineffable. Truth evokes mysterium tremendum and mysterium fascinans. The biggest, most important truths escape the categories that we typically use to explain the mundane and the real. There is a gap, so to speak, between the set of images an artist chooses and the truth about love they are trying to convey. There is space between the composer’s notes and the truth about justice they are attempting to portray. There is a margin of mystery between religious rites and relics and the truth they illuminate. I could dig in my heels and demand that Jesus the Son of God who redeemed the world for the sake of love correlates exactly to the historical person Jesus of Nazareth who ate and taught and walked, but I risk robbing my heart of the opportunity for awe. I deprive myself of the perilous journey of living truth in that mysterious margin.

Please don’t mistake me, I am not comparing the Gospel to a children’s movie. I do not believe that the story of Jesus Christ is infantile or cartoonish in any way. I have nothing but the deepest respect for my tradition and for my Church. Maybe in keeping with the faith of my youth, I felt the need to bear witness to my journey, to make room for someone else beside me, to open the door for another who believes they are shut out.

Which I’m pretty sure is about as orthodox activity as a Christian can expect to undertake.

*I realize that there are many alternatives to Biblical literalism that do not go as far as to repudiate the existence of the supernatural.