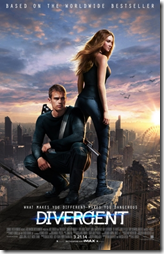 Divergent is the newest film adaptation of a dystopian Young Adult fantasy book – of course the first in a trilogy that will spawn at least two more sequels. Overall, the film is good. The lead actors are good enough (though lead Shailene Woodley deserves a special shout-out: she’s characteristically excellent). The plot is good. The action is surprisingly well-shot. And as a person who read the book, I thought the adaptation was much better than the first Hunger Games film adaptation. The only thing that really didn’t work for me was the soundtrack – the songs pushed several songs that were already borderline cheese-tastic into full-blown Velveeta.

What made Divergent worth seeing was its clear message about bravery and self-sacrifice.

Needless to say, SPOILERS for Divergent after the jump. 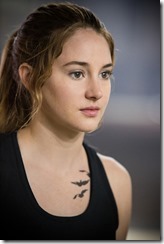 Divergent introduces us to Beatrice, a young girl in a post-Apocalyptic/dystopian Chicago. We get vague references to “the War”, but it’s clear that even Tris (as she renames herself) doesn’t know what happened to the world. We know that Tris’ Chicago is divided into five “factions” that each embody an attribute of human nature (no, we’re not told who did this – that will be revealed in future installments).

Tris is part of Abnegation, the faction that prizes selflessness. They wear drab gray clothes and refuse to use mirrors (as they encourage vanity). We can tell that Tris is uncomfortable in Abnegation, that she wants something else. It’s not hard to see why she chooses to embrace Dauntless, the faction meant to embody “ordinary acts of bravery, the courage that drives one person to stand up for another.”

Tris abandons Selflessness for Bravery. But she’ll learn that the bravest act is the truly selfless act. 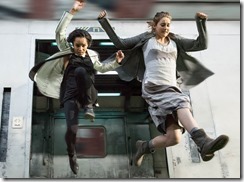 The true nature of selflessness is not the main theme in the book – that’s much more about moralism and finding your place in society and conformity. But Tris’ journey to understand the “religion” of selflessness she was raised in, and truly to embrace it herself is a deeper theme that runs throughout the whole trilogy.

It comes to a head in climactic scene in the Dauntless control center, when she encounters Four under the influence of a new serum powerful enough to manipulate even the Divergents. For all the Erudite talk about overcoming human nature, we learn that what they really want is to suspend thought and will – the very things that make us human – for the sake of control. 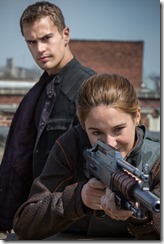 When Four loses his humanity to the Erudite Empire, Tris restores it to him by giving him her life.

When a murderous Four attacks her, rather than killing him to save herself, Tris offers him the gun, pointing it at her own head and whispering lovingly to him,

The Jesus imagery is undeniable (and given author Veronica Roth’s professed Christianity, not unexpected). Tris offers her life up for Four’s salvation much as Jesus gave us his life. Tris’ love restores Four’s nature to himself. Similarly, Jesus doesn’t rescue us from our human natures; he restores us to the nature God originally created in us.

Tris fully embodies both Abnegation and Dauntless by courageously offering her very self up to rescue Four – and the rest of her new Dauntless family and her former Abnegation family. 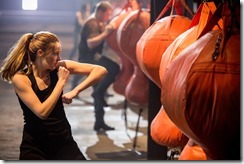 Self-sacrifice for the good of the Other is where selflessness and bravery meet. It’s much braver to offer up your own life to rescue the Other than it is to meet their violence with violence of your own. Tris originally left Abnegation because she hadn’t fully chosen to adopt it as her own. But in learning to be brave with Dauntless, she found that her bravest action is finally choosing Abnegation for herself.

Bottom Line: Divergent is a fun, worth-while flick that has some great spiritual themes.

YOUR TURN: Did you enjoy Divergent? What did you think of the spiritual themes?