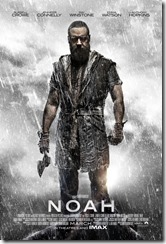 Doubtless you’ve heard by now that Darren Aronofsky’s new film Noah came out today. The film has ignited a firestorm of controversy thanks to Paramount Studio’s attempts to marshal Evangelical support for the film (what I believe studios call the “Passion of the Christ effect”.

This was doomed to fail, because Noah is not a Biblical film – not the same way the recent (and already forgotten) Son of God was. It’s better to say Noah isn’t an Evangelical Christian film (neither was The Passion of the Christ, but Evangelicals don’t know their Catholicism well enough to catch that).

Noah is a tremendous cinematic achievement. It’s at once apocalyptic and deeply personal, taking the flood story seriously and searching for the human center of said story.

The expectations you take into a film shape your viewing experience. With that in mind, here are 5 things you need to know before you watch Noah.

1. Noah is a Midrash, not a Remake 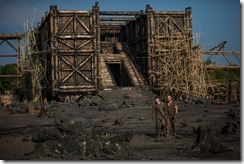 As far as I can tell, a lot of the Evangelical backlash against Noah (from those who’ve actually, you know, seen the movie already) is because Noah takes so many liberties with the Biblical story – Ham and Japheth don’t have wives on the ark, for instance. But Aronofsky clearly didn’t set out to create a strictly literal version of the Biblical story – he didn’t set out, in other words, to remake the flood story. (Remake is much more similar to what Son of God was attempting to do.)

Rather, following in the Jewish tradition in which he was raised, Aronofsky created a midrash of Genesis 6-9.

Read this fantastic interview with Darren Aronofsky from Christianity Today.

A remake seeks to stay as true to the biblical text as possible. So, for instance, if Noah had three sons and three daughters-in-law on the Ark, then the film will have the same. In that regard, a cinematic remake of Genesis 6-9 would’ve been quite short – more like a 30-minute short.

A midrash is very different from a remake. A midrash looks for the “cracks” in the story, seeks to bring out new meanings and tensions. Midrashim fill the gaps with speculation – guided by the original text and the community wrestling with it – to address issues the text raises but doesn’t address.

So expect Noah to add a bunch of crazy stuff. Expect some of the details not to be quite right. But pay attention to the why of the film. Pay attention to the questions it raises. Because there’s a lot going on ::ahem:: under the surface.

2. The Biblical Flood Story is a (Re)Creation Story

In our modern world, floods are natural phenomena. The Earth is most basically a solid chunk of matter, and the waters are on top of the dirt. But ancient peoples – including the Hebrews who wrote Genesis 1-11 believed it was just the opposite. They believed the universe was surrounded by waters and that God had created the sky and dry ground between the waters (Read Genesis 1 and pay attention to Days 2-4).

Genesis 1 is the story of God creating the world out of chaos – a watery abyss usually translated as “the deep”. God makes space in the water for the world to be. Then, in the flood story, God opens the skies and the fountains of “the deep”.

Any ancient reader would’ve interpreted the flood story as uncreation. It’s a world-ending apocalypse as final as anything in The Walking Dead or Left Behind.

Expect Noah to play up the apocalyptic nature of the Flood. Expect lots of creation language. It’s part-and-parcel of the original Genesis text and Aronofsky makes excellent use of it.

3. Stewardship of Creation is a Major Theme in Genesis 1-11

A lot of Evangelicals have been upset – strangely – by what they perceive as a pro-Environmental agenda in Noah. How Evangelicals ever let ourselves get to the point where we’re mad when someone wants to care for the environment I’ll never know, but we have a strong strain of “theology” that claims we don’t need to care for the world. At all.

That’s too bad, because the only commands God actually gives to humanity in Genesis 1-2 all have to do with a careful stewardship of Creation. God tells us to “be fruitful and multiply. Fill the Earth and govern it (1:28). God creates us to “till and keep” the creation (2:15).  And then of course there’re those trees. 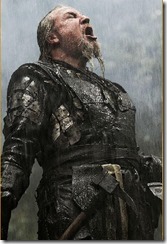 Noah presents the wickedness of humankind as a rebellion against God that manifests as a disregard for God’s creative designs.

Many commentators note the tensions in Genesis 1-11 that come with humanity struggling to make the world in their own image. It all comes to a head after the flood, on the plains of Babylonia.

The tension between the good of technological advancement and the harm it wreaks on God’s good world is undeniably a theme in Genesis 1-11. Don’t be surprised when it shows up in Noah.

4. What are the Nephilim?

The story of Noah in Genesis is prefaced by a strange passage about a race called the Nephilim. They’re described as “giants, heroes and warriors” who are the product of the “sons of God” and the “daughters of men”. Aaaand… that’s about it.

You can find about 1,000 different theories about what the Nephilim actually are. And for the purposes of enjoying Noah, all you need to know is that in the film, they’re called Watchers.

Another reason some Evangelicals are getting mad at the Noah is how the title character himself is portrayed. No spoilers here, but suffice to say it’s not a glowing, beatific hero-worship. Noah is a real person with complex emotions. His relationship with God is confusing and he struggles (actually, a lot like most Christians I’ve ever met).

A lot of people don’t like to see Noah struggle. They want a near-mythic superhero like character, one who never questions, never struggles.

But is this the Noah of Genesis? The text itself might suggest not.

Genesis 6:9 tells us that Noah was “a righteous man, blameless in his generation.” Many take that to mean Noah was perfect. But a number of Jewish and Christian commentators throughout the centuries have wondered why the text says “in his generation” – why not just call him righteous? Many speculate that Noah was the best of his day, but that compared to other heroes of the faith – like Abraham or Moses, Noah wouldn’t come out smelling so great.

All that to say, there’s plenty of room in Genesis 6-9 and in the larger interpretive tradition surrounding Noah to give him some depth and complexity.

Okay this one is a bonus. But really, you can read Genesis 5-9 in probably 10-15 minutes. You can read Genesis 1-9 in not much longer. It wouldn’t hurt to give yourself a refresher before you go see Noah. You’ll be surprised how many little details Aronofsky incorporates!

The bottom line: go see Noah. Go with an open mind and don’t expect strict adherence to the Biblical text.

Expect an artistic engagement with the larger themes of Genesis 1-11, and a profound, personal experience with one of the most important texts in the history of the world.

YOUR TURN: Are you going to see Noah?