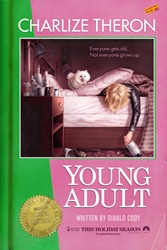 Even though Girl with the Dragon Tattoo was billed as the "feel bad movie of the year", that award might be better applied to Young Adult, penned by Diablo Cody and directed by Jason Reitman. Starring Charlize Theron as Mavis Gary, Young Adult is the story of a woman who hasn’t ever moved on from high school. The recently-divorced Mavis is a semi-successful ghost-writer for a Sweet Valley High-esque series of young adult books. When Mavis learns that her high-school sweetheart Buddy Slade (Patrick Wilson) and his wife Beth have just had a baby, she sets out from the big city (Minniapolis) to the small town where she grew up. Her mission? To save Buddy from the tragic life he’s trapped in.

Young Adult is actually a wickedly clever critique of our materialist culture. 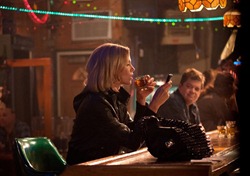 Once back home, Mavis runs into Matt Freehauf (Patton Oswald), the school theater geek whose locker was next to Mavis’ and who was beaten nearly to death in High School by a pack of jocks who heard a (false) rumor he was gay. Now Matt lives with his sister, walks with a limp, collects action figures and makes moonshine in his garage man-cave. Matt is just as damaged, and just as defined by his High School experience as Mavis.

She reconnects with Buddy and learns that he has settled for a boring small-town life. He works at the same plant as his father. He wears flannel all the time. He and his wife just had a baby. Mavis’ disdain for her "hillbilly" hometown is evident in every scene, and despite all evidence to the contrary, Mavis remains convinced that Buddy feels trapped by his small-town life. Mavis works harder and harder to impress Buddy with her looks and exploits, trying to entice him with tales of the Big City. 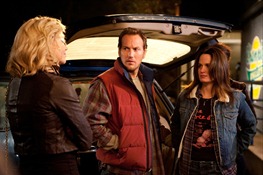 But Buddy isn’t interested. He’s genuinely happy in his life. He loves his wife and his new daughter. They have a lot of fun together. Perhaps most telling is the scene in which Beth’s band – Nipple Confusion, comprised of four new mothers – plays at the local chain restaurant. The place is packed for the band’s show, and it’s not because they’re good.

Buddy and Beth have found meaning and purpose in their community. Their mundane reality is more glamorous to them than any Big City life could ever be. 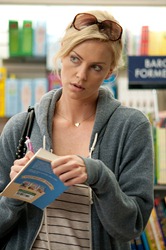 Mavis can’t understand that. Because Mavis hasn’t grown up. She still lives in the fantasy world of a High School girl.

As if we needed further evidence of Mavis’ arrested development, we get to listen in as she writes her final Waverly Prep book – the series has been cancelled due to a drop in popularity. And every experience Mavis has becomes the story of her main character, Kendall – who is Waverly Prep’s prettiest, smartest and most popular girl, of course.

Mavis is literally filtering her experiences through the lens of the High School worldview. And she’s not the only one.

That’s why her friendship with Matt works – Matt is as crippled by his experiences as Mavis was by hers, though they’re at different ends of the spectrum. Matt hasn’t tried anything in his life, hasn’t developed any real, meaningful relationships with anyone, and it’s pretty clear that the reason is who he was in High School.

Young Adult explodes when Mavis attends (at Buddy’s invitation) Buddy and Beth’s naming ceremony for their daughter. She tries to seduce Buddy, and when he rejects her, she propositions him flat out, offering to save him from his awful life and take him to the city with her.

Buddy not only rejects her, he tells her to leave.

But before she can get out of Dodge, Mavis literally bumps into Beth, triggering a drunken tirade that culminates in a confrontation between her, Beth and Buddy in front of the whole party. When she asks why Buddy even invited her, he finally comes clean:

I didn’t want to. It was Beth’s idea…. because she felt sorry for you. We all do.

Buddy’s confession forces Mavis to confront the truth about herself:
She’s developmentally stunted. The rest of her world moved on, grew up. 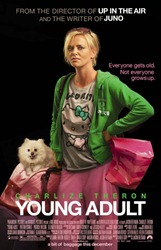 But not Mavis. Broken, she finds Matt and desperate for meaningful contact with another person, she sleeps with him. When Matt asks her what was so special about Buddy, she tells him that Buddy "knew her when she was at her best." To that, Matt replies,

You weren’t at your best then. You had this … mirror in your locker. You stared into it more than you ever looked at me.

High School Mavis was a selfish, cold girl not very different from the Mavis we’ve seen in the film so far. We savvy viewers who know the movie-formula know that a different Mavis will get out of bed the next morning. She’s been changed by her confrontation with Buddy and her relationship with Matt.

The next day, while Matt sleeps, Mavis slinks upstairs. She encounters Matt’s sister Sandra, who has worshipped Mavis since High School. The now-broken Mavis confides in Sandra about her experience. But when Sandra sees Mavis’ emptiness, she rejects it.

Sandra assures Mavis that deep down everyone back home wants to be Mavis (and it’s clear that Sandra most certainly does).  When Mavis asserts that they all seem so happy, Sandra assures her it’s because they’re "small", because their lives don’t matter. She encourages Mavis to return to the Big City, where she’ll continue to be pretty and popular important. And Mavis does just that, only pausing long enough to reject Sandra’s request to come with her.

In Sandra’s words, Mavis found the justification she needed to reject everything she’d learned from Buddy and Beth. So she returned to the Big City exactly as she left.

In an interview with HitFix, Charlize Theron describes what attracted her to Mavis Gary:

Jason Reitman, the director, always talks about… making a film and it’s like holding up a mirror. You only like it because you’re relating to it. You’re see attributes you aspire to or in this case things that you don’t necessarily like about yourself but you have to admit is human.

It’s hard not to see ourselves and our cultural values reflected in Young Adult. Are we surprised that wherever Mavis is, a TV is showing the Kardashians? Are we surprised that the Big City is such a mythical place? That Mavis looks down on people who just want to work a regular job and raise a family?

It turns out that our focus on climbing the social ladder and "making it" is just another manifestation of the High School culture no one actually enjoyed.

In other words, our whole culture needs to grow up.

Everything Mavis values is an overgrown version of High School. She never quit being the prom queen. And it turns out she’s not the only person trapped in High School – neither Matt nor Sandra has escaped. Both of them are still defined by their outcast status. 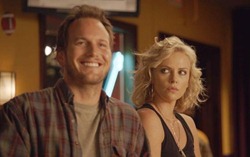 According to Young Adult, "growing up" means finding joy and meaning in the present. It means learning to love yourself, with all your limitations. And it means treating other people as humans, not means to an end. And it doesn’t happen by accident. A person has to choose to reject the High School worldview – whether you were at the top or the bottom.

And it shouldn’t come as a shock to anyone who’s had to do it, but growing up is hard to do.

Bottom Line: Young Adult is a devastating critique of our cultural values. We would do well not to look away from this mirror because we don’t like what we see.

Your turn: What did you think of Young Adult? Did you agree with its critique of our culture? Which character did you relate to the most?