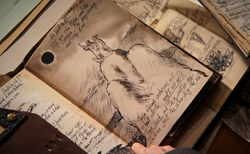 Season 6 began with Dexter fathering Harrison. He marveled that he could "be himself" around Harrison – the only person he knew who really knew him (whatever that means for a two-year old). Dexter referred to himself as a wolf among sheep. But Dexter quickly realized that Harrison was picking up on too much. And that scared Dexter.

Dexter reached the central crisis for this season: Can he raise Harrison free from darkness?

Thus began a long search on Dexter’s part. Inspired both by Harrison’s preschool and his new friendship with Brother Sam, Dexter begins to see himself as a more complex person. Sam gives voice to what we’ve known all along – that there’s more to Dexter than Dexter realizes. He sees himself as a monster, but he truly loves his son.

But is that love enough to redeem Dexter? To let him become more than he is – a monster, a killer?

Brother Sam’s murder at Nick’s hands takes Dexter down a dark path. He sees in Nick the failure of Sam’s theology: wolves can’t become sheep. In his journey to Nebraska to confront Trinity’s son, Jonah, though, Dexter ultimately realizes that the son does not have to become like the father. Jonah’s remorse for killing his mother sparks compassion instead of vengeance in Dexter.

Dexter returns to Miami recommitted to proving he can be more than a killer. His test-case is Travis, who is under the sway of Gellar. Dexter hope that he can free Travis from Gellar, thereby demonstrating that he is a better father than Harry was. But all his hope is dashed when Dexter learns that Gellar has been dead all along, that the "Gellar" Travis is talking to is actually his own Dark Passenger.

Travis is not a sheep caught by a wolf. Travis is a wolf, too. 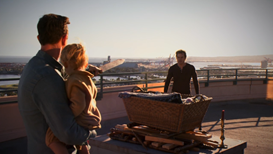 In order to draw Travis out, Dexter embraces his role in Travis’ twisted worldview: Dexter becomes the Beast. He also finally recognizes that he is not superhuman, that he needs to ask for help sometimes. Overall, these realizations have a cumulative, positive effect on Dexter:

Dexter becomes more fully human than we’ve seen him at any point so far in the series.

But then Travis overpowers him and leaves him floating in a lake of fire. And Harrison is home, alone and unprotected from a demented killer.

Death of the Firstborn 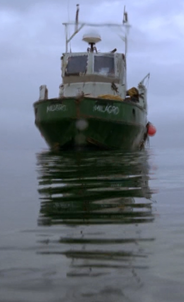 Dexter is saved by a boat – the Milagro ("Miracle" in Spanish), but Travis already has his home address and keys. In order to enact the end of the world, he needs to sacrifice a Lamb – some sort of innocent. And when he learns that Dexter has a son, he decides to abduct Harrison and use him.

The final confrontation between Dexter and Travis on the rooftop is loaded with symbolism: Harrison is dressed as a lion but offered up as a sacrificial Lamb. This recalls John’s presentation of Jesus in Revelation 5:5-6. Dexter, frantic with concern for Harrison, offers himself up to Travis in exchange for Harrison’s life.

This is Dexter’s redemption. He demonstrates wholly selfless love on behalf of another person. This is exactly how Jesus defines love in John 15:13:

There is no greater love than to lay down one’s life for one’s friends. (NLT) 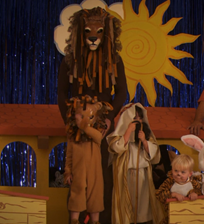 Dexter has found some sort of redemption in his love for Harrison. It’s by no means a conversion. And it’s certainly not an indication that Dexter will change. In fact, as he and Harrison are getting ready for the Noah’s Ark play, he muses

It’s okay… we’re lions. That’s just what lions do. We’ve got an ark to get on, and that boat has room for all the animals. Not just the sheep and the zebras, but the lions too.

And Dexter is a lion. In addition to the lion mask, his costume consists of his kill outfit. Dressed as a Lion on the Ark, Dexter is more himself than at any other point in the show.

Later, once Harrison is safe at home, Dexter tells him,

Whether you’re a lion or a lamb, I’ll always love you. Maybe that’s all I need to pass on to you.

Dexter finally articulates his new understanding of himself with Travis on his kill table. He says,

Dexter: No, I think I belong right here. Because maybe there is a place for me in this world… Just as I am. Light cannot exist without darkness. Each has its purpose. And if there’s a purpose to my darkness, maybe it’s to bring some balance to the world. Cause let’s face it: the world is going to be a better place without you.

Dexter has come to peace with who he is. He has discovered a new freedom, a control over his Dark Passenger he hasn’t known before.

Most importantly, he can raise Harrison confident that he is fully capable of helping Harrison become who he was meant to be.

The Way the World Ends

The final kill scene is set up as a Mass in the abandoned church. Dexter is the priest and Travis the Eucharist meal. Thematically, it’s a bookend with Dexter’s first kill of the season, Joe the ex-quarterback.

Travis and Joe both used God to excuse their crimes, and Dexter is impressed by neither. We can’t help but recall Brother Sam’s story of redemption, the pain he expressed over his sins and the daily struggle he described to conquer his inner darkness. Neither Travis nor Joe evidenced any of this.

Travis awakens, sees the crucifix and believes he’s finally meeting Jesus. Instead, he sees Dexter, who tells him:

This is the way the world ends… your world, anyway.

When Travis defends himself, claiming he was only following God, Dexter spits back at him,

I’ve known people who believe in God. They would never use their faith as a convenient excuse to kill ten people. YOU used God. Not the other way around.

Travis seems unshakeable. He is confident that he is righteous, that God will vindicate him:

Dexter: It must be nice to be so certain.

Travis: You’re wrong. About everything because you don’t believe in God. But I have faith. I trust in God’s plan.

Dexter can’t help but point out the flaw in Travis’ logic:

Really? Then it must be God’s plan that you’re on my table. You think it’s God’s will that I’m about to kill you? GOD has nothing to do with this. You are wrapped in plastic because I want to kill you.

Dexter realizes that he is fully responsible for his choice to kill.

Travis is anyone who’s ever used God to escape personal responsibility for our actions.

Dexter’s conversation combined with the setting make for a strong final statement on religion. Dexter has accepted his nature as a part of the natural order of things. The world has room for both light and dark. The Ark has Lions as well as Lambs.

But what matters is here and now. We make choices that have real effects on the world. And we are accountable for those choices. If the time comes that Dexter must face justice for his choice, it seems he’ll do so without regret. For now, he’ll gladly continue to kill. But he’ll choose to kill those who brink darkness instead of light.

Dexter is a lion that preys on other predators. He makes the world safe for the lambs.

The only question that remains is, Will that be good enough for Deb? 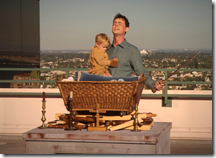 In several different posts, I hoped that Dexter would save Travis. Clearly this is not the case. Travis is not redeemed. I’m awarding the writers two points for this, because I put so much weight on this plot point.

However, I did rightly predict that Dexter saves Harrison from being sacrificed by Travis. I called the Lion/Lamb motif. That’s a point for me. And speaking of Harrison…

In the finale, we see Dexter create a new mythology for himself, and it centers on Harrison. Dexter has accepted the darkness and the light inside himself, and he’s now confident that he can provide a loving home for Harrison. That’s another point for me.

Finally, I predicted that Deb learns the truth about Dexter. And she did, in shocking and dramatic fashion. But since it’s not part of the main story, I’m only awarding myself one point for it.

I "won" by two points, but it doesn’t feel like much of a win. I was totally wrong about both Gellar and Travis. And while Dexter does find a sort of redemption at the end, it wasn’t as full or satisfying as I’d hoped.

There you have it: My take on Dexter‘s take on God. What did you think of Season 6 overall? Were you satisfied with the resolution?