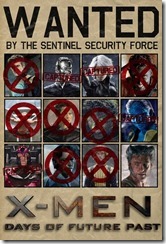 X-Men: Days of Future Past is technically the seventh X-Film from 20th Century Fox studios (all three original X-Men films, two Wolverine films and the First Class prequel/reboot). Only two of those films – X2 and First Class – can be considered truly good, and two others – X3 and Origins: Wolverine – were straight up abominable. So you might be forgiven for a healthy dose of skepticism that a seventh installment could possibly be very good – and that’s before you hear the premise.

Days of Future Past features a post-apocalyptic future, time-travel and a huge cast of characters – including the casts of both the original films and the prequel. In the comics, those are glorious story-fodder. But any one of those elements has derailed many a film.

How could a 7th X-film with such an insane premise possibly be good? The answer: bring back Bryan Singer.

Singer directed the first two X-films, films that essentially resurrected the superhero film from the early grave Batman & Robin had placed it in. Singer proved he could expertly handle a super-ensemble long before Whedon scored with Avengers. He officially left X3 because Fox was dragging its feet and Singer got the chance to direct Superman Returns (whoops). And Singer hasn’t been involved in the X-universe since… until now.

Fox announced Singer was back at the helm for a new X-movie, then Singer himself announced that film would be Days of Future Past, clearly his take on the famous comic storyline. And in the middle of production on this film, he tweeted out that X-Men: Apocalypse is coming in 2016.

Throughout the filming and production on Days of Future Past, Singer displayed a confidence that’s clearly well-founded. This film is fantastic. 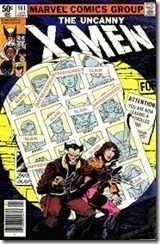 Singer candidly admits he used the film’s time-travel device to “fix” some of the egregious mistakes of X3.  Part of his goal is also clearly to create a coherent universe, some of which requires a skill every comic reader has already honed: the “Just Go With It”. As in: how is Professor X still alive? Just go with it. When exactly did Beast become blue? Just go with it. How did Wolverine get his adamantium back after the events of The Wolverine? Just Go With It. Singer couldn’t possibly make a film that explained every little discrepancy in the previous six films. He did an admirable job, though, and I’m more than happy to just go along with everything else.

But if Days of Future Past was simply a vehicle for creating a coherent universe for the future X-Films, it wouldn’t have worked. We know when we’re being pandered to, and we won’t stand for it. (Are you listening, Zach Snyder?) No, the great strength of Days of Future Past is that it is a terrific story that stands on its own.

Despite being a time-travel film, the story is clear at every point along the way. Each character’s stakes are clear, and we’re never confused about who’s where when and why they’re doing what. Despite the huge cast, each character is distinct, recognizable and important to the plot.

Best of all, Days of Future Past is a strong thematic reflection on regret, forgiveness and possibility.

Days of Future Past takes full advantage of the previous six films. We know who Professor X is. We know who Magneto is. Because we don’t need to spend time establishing backstories or motivations, we can leap right into the central conflict, where these two characters represent poles of a very human choice: to take revenge or forgive.

The fundamental question is, What counts as homo superior? Mutants are “the next stage in human evolution” – they are allegedly Humanity 2.0. But what will this new humanity look like? Since the early days of the comics, Professor X and Magneto have represented two possible answers to that question.

Magneto is exactly the answer humanity is afraid of: Mutants are better than humans because they are more powerful than we are. We exert control over our world through our ability to shape it as we wish. We exert control over our enemies by bending them to our will, by ensuring we’re more powerful than they are. But Magneto is stronger than we are. He has the ability to manipulate our own weapons against us. And he leads an army against which we are helpless.

Magneto embodies might makes right. He is better because he is more powerful.

Professor X is the answer humanity needs: Mutants are better than humans because they have a better character. We respond to violence with violence. To mistrust and hatred with mistrust and hatred. But Professor X is stronger than we are. He responds to violence by protecting those who try to hurt him. He responds to hatred and mistrust with forgiveness and aid. And he leads an army that refuses to fight us no matter how much we fear them.

Professor X embodies the power of forgiveness. He is better because he is morally superior.

This conflict is played out in Days of Future Past in the character of Mystique. 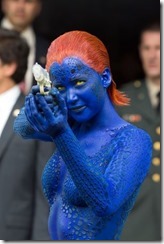 Mystique feels abandoned by both Professor X and Magneto. In her pain, she lashes out at humanity, particularly those who’re hurting her kind – mutants. Mystique’s violence is slowly escalating toward murder – she will kill Bolivar Trask and her choice will set the whole world on a dark course.

(It’s interesting to note that the humans’ violent response – the Sentinel program – also cascades out of control and destroys the whole world.)

In the film’s climactic scene, Mystique must choose between the way of Magneto and the way of Professor X. The way of violence and the way of forgiveness. In choosing not to assassinate Trask, Mystique embraces the harder road of forgiveness. She is committed not to a passive, permissive inaction, but to a much harder reality: to refuse to meet violence with violence. To refuse to sink to the level of her attackers. To prove that she is, in fact, homo superior.

That this is the more difficult, more painful choice is embodied in Professor X’s own character journey. In the wake of the events of First Class, Professor X is a broken, fearful man. He lives in seclusion, actively denying his powers because engaging all those fearful, hateful people is too painful. It takes Wolverine – a man from the future who knows what Professor X is going to become – to call Charles back to himself. To reaffirm his hope in humanity and in his friends.

The Christian parallels are obvious: we can easily imagine Paul speaking in romans 5 of those who are in Magneto as those who are in Adam – those who cannot forgive and who know only how to hate. The alternative are those who are in Professor X – those who are in Christ. Those who have been called back to the best versions of themselves, the Self they were created to be. The Self that forgives and hopes and trusts and loves even when that’s the most difficult, painful choice.

We are all Mystique. We all have the choice to give into our base, sinful natures or choose to follow our leader who shows us a better way – the harder way of forgiveness and love. Let’s hope we all choose as well as Mystique did. Because time-travel is only in the comics. The dark futures our fear, anger, hate and vengeance create can be redeemed, but never undone. We have only today, so let’s make the most of it!

BOTTOM LINE: Days of Future Past is a tight, fantastic comic-book film whose story and characters open the door to some profound theological reflection.

YOUR TURN: What did you think of Days of Future Past? Are you Team X or Team Magneto?