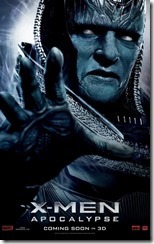 X-Men: Apocalypse is technically the ninth film in FOX’s franchise (if you count both Deadpool and The Last Stand the abomination that can’t be named). But it’s also the third film in Bryan Singer’s reboot that began with First Class in the 60s and Days of Future Past in the 70s.

Apocalypse is set in 1983, and they have some fun with Return of the Jedi, arguing that “the third film is always the worst.” That may be true here, though Apocalypse isn’t an unenjoyable experience, and if you  enjoyed the last two films in this series, you’ll probably like this one. Mostly.

All of your old favorites are back – including Quicksilver. Singer and co. have also added a slew of new mutants (or younger versions of previous characters). We have Cyclops, Jean Grey, Nightcrawler, Angel, Storm, Caliban (what?!), Jubilee (I guess) and a woefully underutilized Psylocke.

When Apocalypse is focused on action, it works very well. It’s when the movie tries to do themes it stumbles.

The movie is called Apocalypse and Singer wants to do more than just bring the classic 80s storyarc to the big screen. He wants to say some things about GOD. If you’re not sure that’s true, don’t worry. Approximately 17 minor characters – newscasters, politicians, etc. – make God and/or Bible references every three minutes or so (on average).

Apocalypse also styles himself as a god whose motivation seems to be power for power’s sake. He is the world’s first mutant, a being who was ancient in the time of Egypt. As any good third film in a trilogy does, Apocalypse retcons the rules established in the previous films. This time, mutants have been around since the dawn of human civilization. Rather than being the “next stage of human evolution”, they are… people with superpowers. Unlike the comics, Apocalypse does seem to have a specific mutant power here: he can reconfigure non-living matter with his mind. He seems to have used this power to create an overly elaborate mechanism for transferring his consciousness into another mutant to steal their powers. Also he can amplify other mutants’ powers (which I assume is one of the powers he stole, but the film never bothers to clarify any of his powers.).

Apocalypse considers himself a god, and despite all the God-talk, the film doesn’t know what to say.

When Magneto’s wife and child are killed, and he kills all the soldiers responsible, he shakes his fist to the skies and rages, “Is this what you want? Is this what you want me to be?” Given that Magneto is a product of the Nazi concentration camps, this is a bold move from the film. Much beautiful and powerful philosophy and art have come from persons of faith wrestling with the problem of Evil as embodied in the death camps. Now Magneto is wrestling with those same questions, with his nature and his own inability to escape a life of violence and revenge.

Unfortunately, he is recruited as one of Apocalypse’s Four Horsemen. (Why only four? The film jokes that the Bible got them from him, but it’s clearly something the writers just thought would be cool, given the otherwise arbitrary number.) Apocalypse claims to be the source of all humanity’s religious mythology  – he has been known as Ra and Elohim, among others. (Notably, someone left “Yahweh” out of the final cut of the film, though it was in all the trailers.) Magneto then asks Apocalypse why he let Magneto’s family die, and Apocalypse says, Sorry I was sleeping, but now let’s kill everyone and start with Auschwitz!

This was supposed to be a pivotal moment for Magneto, who for three films has been torn between hope and revenge. But instead it’s really, really silly. We were unaware before this film that Magneto had any sort of faith, and the film gives us no reason he would assume Apocalypse is the same Person to whom he prayed when his family died. As it does again and again, here the film just shoves a bunch of God-talk together and hopes you think it’s SAYING SOMETHING.

Fortunately, it doesn’t spend too much time trying to be important and gets back to mutants fighting each other.

A charitable reading of this film would assume it’s yet another commentary on the Death of God.

God can’t stop evil, so what good is he? What we really need is each other, which is what Professor X reminds Magneto of and then oh yeah, PHOENIX, which is sort of a god, so actually that’s a deus ex machina but don’t worry God is dead!

Again, is the film trying to say that? Maybe. Maybe not. It was too much of a mess to make much sense out of any of the themes. If you’re looking to have some fun and you’ve already seen Civil War three or four times, you might as well catch this one. But nothing in this movie even gets into the ballpark of as awesome as that airport scene.

With a fourth film – the Dark Phoenix saga, set in the 1990s – already announced, Apocalypse doesn’t have to do too well. Which is fortunately, because this franchise is definitely starting to show its age. Let’s hope Deadpool 2 and a finally-R-rated Wolverine film can do something interesting.

The effects in Batman v Superman were much better. The superhero brawls in Civil War were more interesting and compelling. If Fox wants to hold on to the one successful franchise it still has, it’s going to have to step up its game substantially.

YOUR TURN: What did you think of X-Men: Apocalypse?