When the Daily Planet was founded, it used to stand for something. – Clark Kent.
Yeah, and if it were 1938, you could too. – Perry White 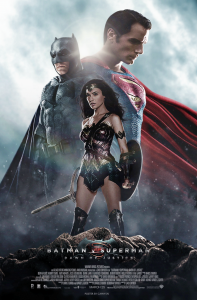 Let’s get this out of the way: Yes, Batman v. Superman is as bad as you’re hearing. And yes, Batman v. Superman is worth seeing. Director Zach Snyder has never made a movie that’s looked bad, and BvS is no exception. See it if possible on an IMAX screen (a real IMAX screen, not the lieMAX at your local cinemas). Trust me, this film will suffer on the small screen because it’s dark. In every sense of the word.

In order to catch up with Marvel, DC skipped the 5 or 6 individual set-up films on the way to The Justice League and instead followed up Man of Steel with Dawn of Justice which sets up The Justice League. Unfortunately, that means BvS suffers from Iron Man 2 syndrome, in which about 2/3 of a good movie gets Frankenstined together with a bunch of set-up stuff for future films that leaves the Frankenfilm you’re watching feeling bloated. Which is not a good feeling for a dark, heavy film that already drags a good bit.

The plot is silly. The characters are two-dimensional (when they’re not flat-out caricatures). The action is slick but empty. And the thematic elements that pervade the film are so heavy handed I felt like I was watching one of the aborted Narnia sequels.

Batman v Superman is not a very good movie. Now for spoilers.

The plot is convoluted but straight-forward enough once you untangle it. Lex Luthor blames God for killing his parents. He’s (apparently) haunted by the classic theological quandary we call Theodicy, or the Problem of Evil. Not sure what that is? Fear not! Lex spells it out for you in the film: if God is all-powerful, then God cannot be all-good. If God is all-good, then God cannot be all-powerful. For some reason, Superman is a threat to Lex’s atheism. Superman is too good for Lex to endure (even though, to be clear, Superman is decent, especially in the wake of Man of Steel, and very powerful, not all-good and all-powerful). In order to prove Superman is a false unworthy of the world’s worship, he mines kryptonite, entices Batman to steal it and kidnaps Superman’s mom so he can blackmail Superman into fighting.

Simple, right? Never mind that Superman can hear Lois fall off a building from halfway around the world. He can’t find his mother when she’s less than 10 miles away.

Apparently even Lex doesn’t think his own plan is smart because he creates Doomsday as a backup plan. Either that or his plan was to discredit Superman by filming his execution of Batman then immediately have Doomsday kill him. Then… well we’re not sure that Lex had a plan to get rid of Doomsday after that.

In a move that surprised no one who has ever heard of Doomsday, he kills Superman (but don’t worry he’ll be back). Batman feels so bad that he “let Superman down” (How? Unimportant!) that he convinces Wonder Woman (easily the best part of the film) to start the Justice League with him by tracking down Flash, Cyborg and Aquaman.

The plot is silly. But the film truly suffers at the thematic level.

The central question of the film is whether God can be trusted. And there’s a ready-made sermon right in the heart of the film. In the face of the question of Evil (why do bad things happen to good people?), the film tries to offer us a God who dies, complete with all the religious iconography we’ll see everywhere this Holy Weekend.

This is a good answer to the problem of Evil: the crucified God, the God who dies for and with us, can be trusted and is worthy of our worship even in a broken, hurting world. But Batman v Superman doesn’t earn it. It beats us over the head with these themes repeatedly, but Superman is clearly not all-powerful. And there’s no rhyme or reason to whether people look to him as a vengeful god to fear or a wholly benevolent god to trust. The only reason the film gives us for looking at him as God is because Lex Luthor says it over and over and over (along with every politician and newscaster).

The film wants to redeem Superman, but can’t figure out any way for him to live in this world. The quote above is no accident: the Superman comic debuted in 1938, and back then Superman was allowed to stand for something. Today, in our post-9/11, post-Christian, post-Modern world, the best we can do is kill God and feel really sad about it. (Which you’ll recall is exactly what Superman did to Zod in Man of Steel).

That Snyder can’t get Superman right in two movies reveals the deeper problem with this Snyder-run DCUniverse: they don’t actually like superheroes.

Marvel’s movies are fun because the characters in them are enjoying themselves. They like the world they live in and they are willing to fight to save it. When Cap and Iron Man go head to head in Civil War later this year, it will be because they both care deeply about doing the right thing to protect people, not because one of them wants to straight-up murder the other one.

Snyder, Nolan, Goyer and the rest are deeply pessimistic about humanity. They don’t seem to believe in happy endings (300’s “a good death” is the best one can hope for). Life is meaningless unless you impose meaning on it. (More or less an actual quote from Bruce Wayne.) In that world, superheroes don’t make sense. Superheroes are myths. They’re larger-than-life, more-than-human (ahem… superhuman) characters who show us how to be better than we are. Superheroes pull us up out of the muck and invite us to work hard to make the world a better place, the one we see in our imaginations.

No wonder, then, superheroes are so often thought of as childish.

It’s childish to want a better world, to think we could be any different toward one another. It’s foolish to believe in someone who’s human and yet more than human, who can show us how to be better than we are. That’s all childish. No room for that sort of foolishness in the real world.

Which is why, as hard as it tries to argue against this worldview, Batman v. Superman doesn’t pull it off. It can’t convince us that Superman has any good reason to save the world so he just does. It can’t convince us that a Batman warped by years of nihilims and hate can change so he just does. What’s missing from this film is any sense of childlike wonder and awe, any conviction that the world is actually worth saving. (The characters just stating it as such doesn’t make it so.)

What the DC Snyderverse is missing is faith. The faith of a child. Hope that the world really can get better. No wonder Man of Steel and BvS are so relentlessly bleak and brooding. They don’t know how to be anything else.

Bottom Line: Batman v Superman is a thematic and narrative mess with some visual treats. You should see it, but go in with expectations low.

Your Turn: What did you think of Batman v Superman?