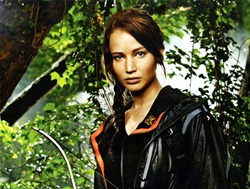 Today, we mostly think of our bodies as external attachments to our souls. They’re not part of who we “really are”. Our “true selves” are hidden inside. Our bodies are disposable, modifiable extras. (I’ve addressed this here and here.) We’re wrong. Our bodies fundamentally shape who we are.

Thinking wrongly about our bodies makes us easier to control and pacify.

The Hunger Games illustrates how powerful our bodies truly are. In the story, bodies are the site on which the war for control is waged. Throughout the story, the Capitol demonstrates its power over Panem by exerting control over its citizens bodies.

Most basically, the Capitol controls the physical space citizens of the districts are allowed to occupy, on a day-to-day basis through fences. Each District is kept separate from the others, and each has a specific identity tied to the physical world (District 12 mines coal, District 4 fishes, etc).

The Capitol’s presence is clear even in the differences in how various citizens present their bodies to the world. On Reaping Day, Capitol citizen Effie Trinket wears bright, garish colors and modifies her face and hair with makeup and dyes. The citizens of District 12, in contrast, all wear drab, dirty clothes that feel like uniforms. Both Capitol and District citizens are surrounded by the Capitol’s Peacekeepers. No garish colors or dirty browns and greys. The Peacekeepers dress in dazzling white, calling to mind other Evil Empires like Star Wars‘ Storm Troopers or Apple. 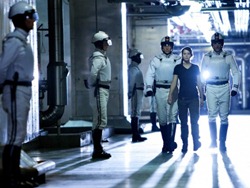 The contrast only deepens when Katniss arrives at the Capitol. She is overwhelmed (as are we) by the wealth, comfort and (relative) freedom its citizens enjoy. She finds that Effie is downright modest compared to most Capitol citizens, who express their freedom through their dress and bodily presentation, among other things.

The Games themselves are an even more overt means by which the Capitol demonstrates its sovereignty by controlling bodies.

The Hunger Games are a carefully constructed mechanism of control. They simultaneously distract Capitol citizens from injustice, give some small measure of hope to the enslaved Districts and keep them hopeless enough never to rebel.

It’s only appropriate, then, that Katniss fosters rebellion against the Capitol using her body.

From the first, Katniss refuses the boundaries the Capitol makes for her body: she hunts outside the fenced borders the Capitol established. By hunting, she provides forbidden foods to her District. The problem is that Katniss isn’t aware how significant her little rebellions are. Haymitch and Cinna carefully train her to continue to use her body to subvert the Games’ spectacle.

First, Cinna uses Katniss’ clothing to make her the crowd favorite – first lighting her on fire, then with her sparkling dress and finally by hiding the mockingjay pin on the uniform designed to reduce her from Person to Contestant. Haymitch goads her into threatening the game designers with bodily harm – when she shoots her arrow toward them. This gets her ranked as the most dangerous of the competitors.

The Game makers are right. Because she refuses to let the Capitol control her body, Katniss threatens the Capitol’s hold on everything.

In the games themselves, Katniss defies the Games’ competitive nature when she carefully, lovingly prepares Rue’s body for burial. Burial is a very physical action, expressing love and concern for a body (not just a soul). A funeral – no matter how impromptu – loudly rejects the Capitol’s insistence that these Games contestants are disposable non-persons.

And it works: Whereas the Games are meant to foster competition among the districts, Katniss subverts the Capitol’s agenda, connecting with Rue’s home District 11. Even her salute is an intentional, bodily gesture of respect and solidarity that results in a gesture of solidarity from a foreign district. All of these actions point to the citizens of Panem’s shared humanity. Katniss inadvertently proclaims that they are all people, that they have more in common than they think, that their bodies matter, despite what the Capitol says.

At every step in the Games, Katniss uses embodied, concrete actions to defy and undermine the Capitol – even when she doesn’t fully realize what she’s doing.

Haymitch’s larger plan involves convincing the Capitol’s citizens that Katniss and Peeta are lovers. Katniss doesn’t fully understand the plan, so Haymitch trains her – sending the much-needed parachutes only when Katniss makes overt, bodily romantic gestures towards Peeta – caring for his wounded body, kissing him, etc. 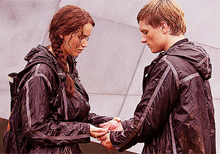 The climactic moment, Katniss’ final decision is wholly embodied: the Game-makers have just announced that there will be only one winner. Only Katniss and Peeta remain. Rather than submit to their system, rather than let them win, Katniss pulls out the poisonous nightlock berries and offers some to Peeta.

Rather than giving the Capitol its much-needed winner, Katniss and Peeta will die together. The Capitol uses the Games to show their control over Pamen: Life is theirs to give and take. But Katniss’ choice asserts her and Peeta’s full control over their own bodies and robs the Capitol of the symbolism it needs to maintain its rule.

The Capitol’s weapon is Death. Katniss takes their weapon and uses it against them.

The result is the beginning of the End for the Capitol. Even though by rating standards, the 74th annual Hunger Games were a raging success, Katniss has become a symbol of the Empire’s powerlessness in the face of love and self-sacrifice.

The Hunger Games provides a model of how we can use our bodies to resist Empire, find genuine community and live more like Jesus. But that’ll wait for next time…

YOUR TURN: Where did you see Katniss using her body to resist the Capitol? What parallels do you see to today’s culture? To Jesus’ time?