By now you’ve no doubt heard everything you need to know about the new J.J. Abrams-directed STAR WARS film. It’s easily the best since Return of the Jedi – maybe since The Empire Strikes Back (it’s the #2 overall spot in my personal ranking, after Empire). The main plot – focused on Finn, Rey and Kylo Ren – is pretty great. A bit light, but no moreso than any previous Star Wars films. The saga-stuff doesn’t detract too badly, though it does repeatedly lend the most wooden dialog to the overall film. And  the action – oh my. Lightsaber battles. Chase sequences with blaster fire. And the space dog-fights. It all looks fantastic, and Abrams’ action direction has come a long way from MI3.

As the first installment in a new trilogy, The Force Awakens does everything it needed to by reintroducing us to a familiar universe, an old conflict and new possibilities.

It’s nearly consensus at this point that the first six Star Wars films are the fall and redemption of Anakin Skywalker. You can argue (as do the Scriptnotes podcast guys in this great episode) that even though Luke goes on the Hero’s Journey in the original trilogy, Vader/Anakin is the true hero of the story, since he’s the only one who changes.

With that in mind, it’s pretty clear that this new trilogy will be the redemption of Kylo Ren. To nearly no one’s surprise, Kylo turns out to be Ben Solo, one of the first of the new Jedi Order trained by Luke after the events of Jedi. Something happened, though, and Kylo turns to the dark side, seduced by Supreme Leader Snoke. His turn destroys the heroes from the original trilogy – Luke flees into self-imposed Exile, ostensibly seeking the first Jedi Temple. Han and Leia split – seemingly because Han blames himself for Ben’s fall.

Rey and Finn’s arcs are interesting enough to make us care about them. Finn’s first battle for the First Order leaves him scared and running. He learns it’s not fighting he’s afraid of, but fighting for the wrong cause. And Rey learns, to paraphrase Maz Kanata, that her destiny is ahead of her, as a Jedi, not behind her.
Both Rey and Finn have murky pasts. It’s entirely possible we’ll learn who their parents are. Is Rey another Solo? In the old expanded universe, the Solo-son who turns to the dark side had a twin sister. I sure hope they don’t go this route after Episode VII, mainly because Han and Leia only mention their son, and you’d think they’d know and care about an estranged daughter. I’m much happier leaving Han as the father Rey never had, as Kylo Ren observes.

We don’t need Rey and Finn to tie into the larger Saga family tree. They more than earn their places through their actions in the film. 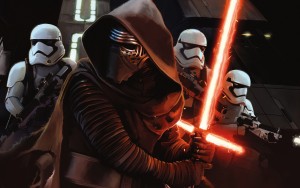 When Episodes 8 and 9 are in the can, this series will belong to Kylo Ren. Whatever happened to him seems to be related to legacy. My guess is that he is exceptionally force-sensitive and that he would not submit to Luke’s training (ala Anakin in Episode II) – this is why Han and Leia lament that “He has too much Vader in him.” Ben/Kylo internalized Luke, Han and Leia’s repeated warnings about his lust for power as fear, shame and hatred. Snoke found in Ben/Kylo a child craving a father figure and craftily stepped into the role, using Vader as his in. Ben/Kylo’s obsession with becoming as good as Vader is really, in a twisted way, proving to his family that they were right about him because then their fear of him is justified. It’s possible Kylo slaughtered the other young Jedi Luke was training, echoing Anakin’s slaughter of the Jedi children in Episode III.
Despite his allegiance to the dark side, Kylo voices repeatedly that he can feel the light calling to him, that he’s afraid he’s too weak to embrace the dark side fully.  The first stage of his journey comes to a head on the bridge inside the power coupler, when he faces his father for the first time in years.

Han calls out his son’s true name, the name of light: Ben. Named after Obi Wan Kenobi, who did his best to shepherd Anakin and Luke into the light. And Kylo swears again and again that Ben Solo is dead, that there is only Kylo Ren, trying desperately to live in the image of his grandfather.

Kylo tells his father of the war within him, the battle between light and dark, and he asks his father’s help in resolving the tension. Han agrees, promises Kylo anything, and Kylo does what Luke refused to do at the end of Jedi. He takes up his lightsaber, kills his father and completes his journey to the dark side.

Episode VII ends with Kylo Ren in the same place as Anakin at the end of Episode III. Expect to see his redemption in Episodes VIII and IX.

One last prediction: each of these films will center around one old hero. Episode VII was Han’s film. The next will belong to Luke (as he trains Rey and returns to the fight). The last film will be Leia’s, and she’ll be instrumental in Ben/Kylo’s redemption.
I’d be remiss if I didn’t mention how powerful I found Han’s sacrifice. Fans have been anticipating Han’s death in Episode VII for literally years at this point. And when the light vanishes as Kylo Ren asks Han for help – well, the symbolism wasn’t subtle. 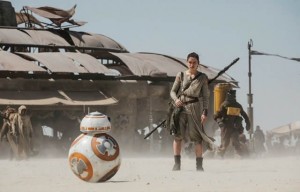 In the face of rebellion, often all a loving parent can do is give their children what they want. Kylo Ren had every opportunity to surrender to the call of the light side, to return to a family who desperately loves him. His father stood in front of him, no weapon in hand, and told him the truth – that he was being manipulated by an enemy who didn’t care for him, that he could come home whenever he wanted. But Kylo craved darkness and so Han gave him what he wanted – Han’s own life.
This is one lens through which we understand Jesus’ death on the cross. God as a divine parent invites us into life, warns us that the enemy only wants to use and discard us. But if we crave death, then God will give us what we want (hear a great discussion of that here). To rescue us from the consequences of our lust for death (which, to be clear, is death!), God became human and offered the Way of God, the path of life. Our rejection took the form of crucifixion, and God willingly offered Godself up for us. God allowed us to kill him that we might see the full consequences of our actions on display. We probably shouldn’t hope for the resurrection of Han Solo, but we have seen before that one who has turned to the dark side can return. Perhaps Kylo will find the self-sacrificing love of his father calls to that insistent light inside him, the voice that will not be silenced, and perhaps Kylo will come to imitate his father, to offer up his own life and so be saved. 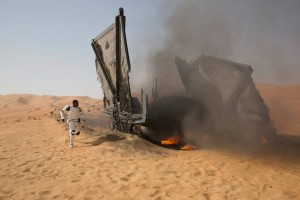 Bottom Line: The Force Awakens is a great, fun movie that is worthy to take its place in the Star Wars canon.

Yes there’s a Macguffin (get the map to Luke Skywalker!). Yes there’s a giant planet-killing device that they have to destroy to save the galaxy. (Though at least the thing they have to destroy is actually really well-guarded, not a design oversight.) And one of the realities of a film in an expanded universe is that many of the film’s oversights seem to be intentionally excised from the plot so they can be told in books, comics or cartoons. (Where did the map to Luke come from? How did Poe Dameron get off Jakku? How did Maz get Luke’s lightsaber? Where did Snoke come from and how is he force-sensitive? Etc.) And yes, the visual metaphors are a bit on the nose sometimes (after Kylo and Rey battle a wide gulf opens between them OMG it’s symbolism!).

But this is Star Wars and we have come to expect these things. They don’t detract from a great stand-alone film with a killer tag/sequel setup that promises possibly the best Star Wars trilogy yet.

YOUR TURN: What did you enjoy about The Force Awakens?