Short Term 12. This is Grace. — Grace (answering the phone at the Short Term 12 group home)

You probably didn’t hear about Short Term 12. Which is too bad, because this is one of the best films to have come out last year – if I’d gotten to see it in theaters, it would’ve definitely made my Top 13 of 13. You can rent Short Term 12 now, so do yourself a favor and watch it now. Why should you see Short Term 12?

Short Term 12 is a beautiful, grounded picture of grace and incarnation.

Spoilers for Short Term 12 after the picture.

Short Term 12 opens on Mason (Newsroom’s John Gallagher, Jr.) regaling newcomer Nate with a story of his first days at the Short Term 12 group home.  They’re joined by Jessica (Brooklyn Nine-Nine’s Stephanie Beatriz) and Grace (a truly outstanding Brie Larson), moments before Sammy, one of the kids, makes a break for the sidewalk. 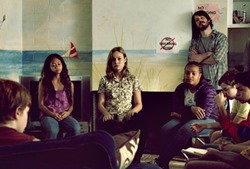 At Short Term 12, the supervising staff can only discipline the kids while they’re on the premises. The kids frequently try to escape, at which point the staff can only invite them back to the home. Grace and her boyfriend Mason have been working at Short Term 12 for several years – long enough to see plenty of kids come and go.

Grace and Mason are both products of broken homes themselves – Grace’s father sexually abused her, got her pregnant and is nearing the end of a prison sentence he served as a result. Further, Grace has just confirmed she is pregnant, a fact that clearly (and understandably) terrifies her.

Despite (maybe because of) her personal demons, Grace lavishes a redemptive love on the kids at Short Term 12. 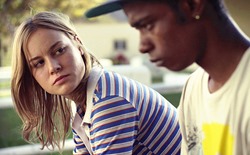 Though Grace cares for all the kids, the film focuses on two – Marcus and Jayden. Marcus has been at Short Term 12 for three years – since he was 15, and now he’s about to age out. Jayden has been in and out of group homes, placed by her father, who we learn is also sexually abusive.

Both Marcus and Jayden test Grace’s boundaries at every turn, seeking to discover the limits of her love (though they don’t view it as love). When Jayden first flees and is then taken from the safety of Short Term 12, Grace goes after her, walking with her, then chasing after her to bring her back.

Grace is appropriately named: she’s a beautiful picture of God’s love for us, revealed in Jesus’ incarnation.

Grace’s love for the kids at Short Term 12 is unconditional. She understands that their acting out, their violence, grows not from a hatred for Grace or the others at the home, but from their own unloving pasts. She embraces them, swallowing their violence and loving them. But Grace’s love isn’t sentimental. It’s tough, enforcing the boundaries she knows are for their own good, and creating a space that’s safe for her children to learn to love and be loved.

Short Term 12 isn’t an explicitly Christian film. But Grace’s love is God’s love. She pursues. She embraces. She forgives. She follows her children into their darkness to call them back into the light and love she offers. 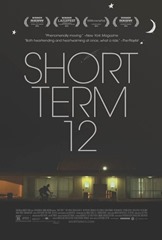 Grace is a promise to all of us who follow Jesus because in offering love to those who are broken, she finds healing for her own brokenness.

Grace feels like a wholly real person – which make Short Term 12 work for me. She’s not a white savior. She’s not Mother Theresa. She’s a person who’s suffered terrible personal tragedy, the effects of which still poison her life. And yet she continues to give herself to the kids in her charge. Instead of running from her brokenness, she allows it to fuel her passion.

It’s messy. It’s painful. It’s ill-advised and definitely illegal at one point. But that’s the kind of love God demonstrates for us – the love that drove Jesus to abandon heaven and give up his life. In the end, that’s the only love that can save us. And that’s what Short Term 12 is really about.

Bottom Line: Short Term 12 is a beautiful, profound and grounded portrayal of redemption and grace. A hopeful and powerful film that’s well-worth your time.

YOUR TURN: What did you think of Short Term 12? Did you connect to Grace?