As soon as I heard Stephen King was writing a book about a preacher, I was in. I’ve loved King since my teen years, when Pet Cemetery first chilled me to the bone. But the book that haunted me most, the book I’ve returned to again and again over the years, is Desperation, which King himself declared to be about God. In a 2009 podcast discussing Desperation, King explains,

I was raised in a religious household, and I really wanted to give God his due in this book. So often, in novels of the supernatural, God is a sort of kryptonite substance, or like holy water to a vampire. You just bring on God, and you say “in his name,” and the evil thing disappears. But God as a real force in human lives is a lot more complex than that. And I wanted to say that in Desperation. God doesn’t always let the good guys win. 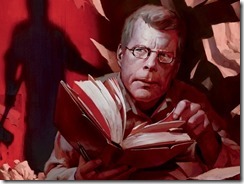 Perhaps it’s King’s complicated relationship with God that has drawn me to his writing.

I pre-ordered REVIVAL as soon as it was announced, and was not disappointed. REVIVAL is King at his best – a clearly told, engaging story with whispers and intimations of horror lurking just below the surface, building to an unholy revelation that’s at once exactly right and much worse than expected.

The joker who pops out of the deck at odd intervals over the years, often during a moment of crisis. In the movies, this sort of character is… the change agent. When he turns up in a film, you know he’s there because the screenwriter put him there.

Of course that begs a question about our narrator’s life:

Who is screenwriting our lives? Fate or coincidence? …I can’t bear to believe [Charles Jacobs’] presence in my life had anything to do with fate. It would mean that all these terrible things – these horrors – were meant to happen… If that is so, we live in darkness like animals in a burrow, or ants deep in their hill.

So begins the terrible story of Jamie Morton. King uses his story to question the nature of religion and the existential terror of mortality. It’s awesome. And horrifying.

Spoilers for REVIVAL after the jump!

REVIVAL introduces us to a young Jamie who meets Rev. Charles Jacobs, his small Main town’s young new Methodist minister. At first Rev. Jacobs’ ministry is flourishing. He and his wife are well-liked, popular with the teens and no one pays much attention to his odd obsession with electricity. Jacobs’ ministry is cut short, however, by a horrific accident in which Jacobs’ wife and child are killed. Jacobs’ faith is rocked to its core – he finds himself unable to believe in a good God in the face of such naked evil as the death of innocents.

In his final sermon (which becomes known as the Terrible Sermon), after listing a series of deaths and disasters, Jacobs opines,

Let us say plainly what Saint Paul meant when he spoke of that darkened glass. he meant we’re supposed to take it all on faith. If our faith is strong, we’ll go to heaven, and we’ll understand the whole thing when we get there. As if life were a joke, and heaven the place where the cosmic punchline is finally explained to us.”

He goes on, exploring the bloody history of the Church, the blind self-assurance of denominationalism and the degree to which people allow themselves to be exploited by religion. With calm rage, he asks:

What do we get for our faith? For the centuries we’ve given this church or that one our gifts of blood and treasure? The assurance that heaven is waiting for us at the end of it all… We will se our lost children… That’s the carrot. The stick we’re beaten with is hell, hell, hell!

There’s no proof of these afterlife destinations; no backbone of science; there is only the bald assurance, coupled with our powerful need to believe that it all makes sense…

Believe what you want, but I tell you this: behind Saint Paul’s darkened glass, there is nothing but a lie.

Jacobs’ sermon is the crisis of faith many face when confronted with evil and suffering, both natural and human. His despair is the existential terror that life may have no ultimate meaning.

After Jacobs’ Terrible Sermon, he leaves Jamie Morton’s life, only to return in a seemingly random encounter years later, when Jamie is a touring rocker, addicted to heroine and near to death’s door. Jacobs is a carney, doing tricks with electricity. He heals Jamie of his heroine addiction and nurses him back to health before leaving again.

The next time Jamie encounters Jacobs, the Reverend is a Reverend again, this time as a revival preacher, using his “secret electricity” to perform faith healings. After attending one of his services, Jamie is convinced Jacobs hasn’t rediscovered religion, but is using the revival circuit as a means to some more mysterious end.

That end, Jamie finally learns, is to pierce the veil, to learn what is in fact beyond the grave.

To that end, Jacobs employs his “secret electricity”, which is finally revealed to be the secret force of the universe, a dark energy banned by the Church and coveted by mystics (and yes, King pays homage to Lovecraft here). Jacobs uses Jamie to pierce the veil and the mystery is finally revealed: on the other side is the Mother, one of Lovecraft’s ancient gods, awakened by Jacobs’ tampering with the “secret electricity”.

Jacobs and Jamie see endless droves of human dead, tortured and driven by insectoid monsters to serve these ancient and terrible gods. They learn our reality is indeed a veil – a thin veneer that barely conceals the true reality of these ancient ones. They learn that nothing awaits the human dead but suffering and pain, that no matter how terrible our lives on this side of the veil might be, they are infinitely preferable to the horrors that wait in the world of the really real.

Jacobs obtains the proof he’d spent his life seeking, and that truth destroys him.

This is King at his horrific best. More terrifying than the atheistic vision of a purely material world in which we are only bodies that have no afterlife (say like True Detective’s Rustin Cohle’s theories of humanity) is the dread we find in REVIVAL: that there is an afterlife, but not one ruled by a benevolent loving deity. The deepest horror is that that the presence of suffering reveals the law of the universe to be Death, that Love is an illusion. That regardless of how good or noble or pure or innocent or saved we might be, in the end, we all end up in the same chamber of eternal horrors.

In the story of a preacher who loses his faith and so decides to fling open the doors of the afterlife, King has given us an anti-gospel. Jacobs’ revelation is exceedingly bad news, and it’s horror on a most basic, primal level.

BOTTOM LINE: REVIVAL is an expertly crafted and told horror tale, one that touches on the deepest human fears. Well worth a read, but it will stay with you.

YOUR TURN: What did you think of REVIVAL? Do you enjoy this sort of horror?