When I was a kid I use to love getting up on Thanksgiving morning to watch the Macy’s Parade in New York City while fighting with my sisters over who would have to clean the most dishes seven hours later.

As a grownup aged person, I enjoy football a lot. Like a really lot. Meanwhile, the parade–televised every year since 1952–lost its luster for me years ago, so I thought maybe I could increase that old magic by combining these two wonderful American traditions.

What follows is my attempt to field a football team out of traditional parade stars. Some of these faves might not roll down Broadway anymore, but they all took the stroll at one point. The task is daunting, but I’m willing to take it on for you. Still, I know you can probably do better, so I hope to hear your suggestions in the comments below.

He’s super versatile and can really confuse the defense by offering so many different looks. Badamp-ch!

We can go over, under, or through you. And Spidey never drops a pass.

The Red Baron knows how to clear a path.

I think Smokey and Buzz are solid all around on the left side. Mickey is always trying to be the center of attention, so he can play Center. Garfield is immovable. Just ask Jon Arbuckle. And Grover is the Monster at the end of this line.

I think Santa’s the perfect guy to captain the defense. He got plenty of stamina and great vision. He sees you when you’re passing. He knows if it’s a play fake. He’ll blitz against your run scheme, so be careful for goodness sake. 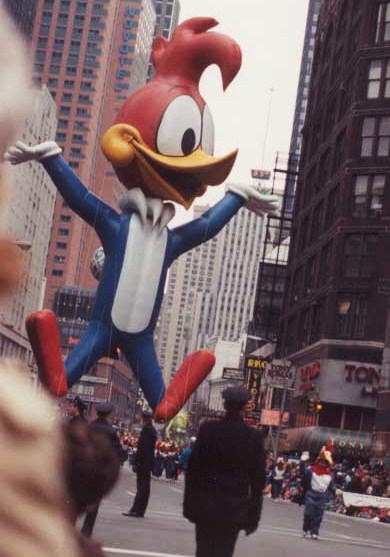 I don’t think Woody still appears, but he was my favorite float as a kid. Loved that guy. If you’ve ever dealt with a woodpecker you know how pesky they are. Great trait for a cornerback.

Just try coming across the middle with this big hitter back there. He’ll get fined for plenty of big hits. Skadoosh!

My defense has layers. Like an onion. Or cake.

Impossible to catch unless he gets distracted by coins.

Just makes sense doesn’t it? Those frog legs were made for kickin, not eating.

Now Charlie can finally kick the ball while holding it himself. Lucy can’t torture him anymore by pulling it away at the last second.

There’s a practice field at St. Charles Place even though it’s kind of close to the county jail.

No, seriously. I really wish these three made up a cheerleading squad.

Donald Duck and the Pink Panther–Broadcasters

I think Donald might have to carry this duo.

What Macy’s parade characters would you want on your football team?

Who did I leave out?

A slightly different version of this post originally appeared a couple years back at Meet The Buttrams.