Pain and Gain is the new film starring Mark Wahlburg (who will forever be Marky Mark in my heart) and The Rock. It’s smart, funny and completely over-the-top, which makes it hard to remember that the story actually happened. (Here’s a great article from Slate fact-checking the film).

But the most surprising is that this thoughtful, well-crafted film was directed by non other than Michael Bay.

Yes, that Michael Bay. The same director who crapped on my childhood with his Transformers films and desecrated a national tragedy with the abomination that is Pearl Harbor.

That Michael Bay made a smart, fun film that offers some fascinating reflections on the American Dream.

The film opens in Miami on Daniel Lugo running from the police but quickly jumps back 6 months to late 1994. Daniel is a personal trainer who’s discontent with the state of his life despite his can-do attitude. He tells us

If you’re willing to do the work, you can have anything. That’s what makes America great… The way to improve yourself is to better yourself. That’s the American Dream.

Daniel sees his peak physical condition as the embodiment of that American Dream, going so far as to muse on how America itself has bulked up substantially from the original “13 puny colonies”. 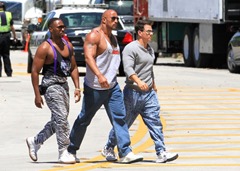 But despite the fact that Daniel has acquired his chiseled body naturally, he loses patience with this same all-natural tactic for bulking up his life. [I assume Daniel didn’t use steroids. It’s never made clear if he or Pau (the Rock) uses, but their other partner, Adrian (Anthony Mackie) deals with usage side-effects the others don’t.]

As the film’s protagonist, Daniel Lugo is likable and sympathetic, despite his truly awful choices. The tone Bay chooses to take gives us a clue to what he wants to say with Pain and Gain, words he puts in Lugo’s mouth early on:

There’s nothing wrong with achieving the American Dream, but there’re no shortcuts.

Bay contrasts Daniel with the man he robs, Victor Kershaw (Tony Shalhoub). Victor’s a half-Columbian entrepreneur who’s a pretty terrible human being – certainly far less likable than Lugo and his crew. Throughout the film, Victor is ignored, punished or dismissed for his selfish, cruel demeanor, but by the end, Victor is the film’s clear victim. Why?

Because Victor worked for everything he has, and it doesn’t matter that he’s a terrible person. The life he’s built is his by right of having built it the hard way.

The other clear hero is retired PI Ed DuBois, who’s had a great career as a cop, then as a PI and who is now living the good life with his wife. DuBois is the quintessential Bay hero: an honest, hard-working American who’s earned everything he’s got. DuBois wants to do the right thing no matter what – even if that means defending the awful-but-innocent Kershaw and punishing Lugo and his crew.

The film’s moral is clear: working hard and making a lot of money isn’t bad. Trying to do so by hurting other people – particularly by taking from those who have already worked hard is bad.

According to Pain and Gain, hard work brings life while shortcuts bring death. 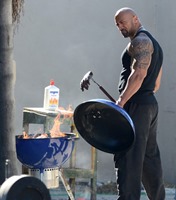 The film’s message is predicated on the very conservative conviction that anyone can achieve the American Dream with good old fashioned hard work. But America has never been the Land of Opportunity – at least not for everyone equally. In fact, the so-called American Dream is just that: a fiction that those our system favors continue to exploit to the detriment of lots of honest, hard-working people excluded by our culture and economy.

A Christian might further ask if so radically individualistic a story such as the American Dream portrayed in Pain and Gain is compatible with the Gospel at all. The idea that I work hard to get mine and leave everyone else alone runs counter to the spirit of community and communal sharing running through the whole of the New Testament.

In other words, Pain and Gain is a film in search of a hero. It’s not Lugo. It’s not Victor Kershaw and it’s not really even DuBois. But it is a great story, and has plenty of food for thought. Plus it actually happened (more or less). Not bad, Michael Bay.

BOTTOM LINE: Pain and Gain is entertaining and will give you plenty to talk about. What more do you want?

YOUR TURN: What did you think of Pain and Gain? Do you agree with its portrayal of the American Dream? Why?