All of my theological and philosophical work is driven by one inscrutable quote from Jesus of Nazareth found in the Christian Testament: But when you give alms, your left hand must not know what your right is doing. (Matthew 6:3 NJB)

In the early days of my studies, I thought that it was a proscription against self-aware righteousness. Jesus of Nazareth was offering a warning about counting yourself good because you are found doing what is accepted as good. As a Christian, I believed I was called to conquer the self, become selfless, and, then and only then, was the possibility of doing good open to me.

As I moved through all kinds of material in the quest to undo the self, I began to understand the verse differently. Maybe our best good was good that was so a part of ourselves that we are blind to its value.

For example, take a friend of mine who is an incredible painter. When she first started showing her work, she was asked to price each painting. She had a hard time calculating a fair value. “I just paint,” she said. “It’s just what I do.”

I’ve been thinking a lot about this verse lately, in the context of current events. Those who hate (or who choose to love so narrowly that they exclude others from being worthy of love) seem to have no problem acting out, communicating to a wide audience the intensity of their feelings. Far too often, they choose to hurt or kill others to make their point. And what I want to know is, if I choose to love others intensely, to practice welcome extravagantly, to champion justice unequivocally, how can I communicate that in a way that is similarly disruptive to the lives of others, but of course, not violent or harmful.

I’m drawn back to a previous chapter in that same book of the Bible, to the place in which Jesus tells us to offer the other cheek when struck, our shirts when our coats have been stolen, another mile when we have been compelled to walk one already. These verses are maybe just as inscrutable as the “left and right hand” verse I quoted at the start. On the face of it, it seems that Jesus is asking us to capitulate to injustice, to participate in our own abuse. But I don’t believe this is the intent of Jesus’s teaching.

The context of the “cheek verse” is a break with retributive justice, the kind of justice that expects “an eye for an eye and a tooth for a tooth.” For the record, this is the kind of justice that forms the basis of much of the American legal system. The court awards the plaintive compensation for their loss in keeping with the severity of the crime perpetrated against them. But Jesus was asking his audience, and all Christian to follow, to look beyond those very rational measurements.

“Turn the other cheek” is crazy talk really. Who in their right mind would do something as absurd as offering more than what was being extracted by force?

Absurdity, I believe, is actually the point.

If in our confrontations with injustice, we need to choose to go off-script, respond in a completely unanticipated way. In so doing, we engage the possibility of the whole system being turned on its head. In psychological terms, this is called breaking a contingency chain. I do X and then you do Y and then I do Z like we’ve always done. Except this time when I do X, you do 3 and now, well, what in the world is going on here?!

Now I don’t know if you’ve ever been struck in the face, but I can tell you that the immediate reflex is to hit back. How are we supposed to have the wherewithal to choose to do something completely different, absolutely absurd?!

Again, I used to believe that it meant training ourselves to a response that was unlike us. I suppose this idea still has some merits. At one point, I studied karate and self-defense. Although I have not practiced in a long time, if I feel physically threatened by someone, I still raise my hands to suggest backing off with my hands to the inside of my elbows. I do this because I was taught that this posture better prepares me to fend off an arm or arms extended towards me in violence. With my hands on the inside, I have created the option of sweeping my arms out, sending my attacker’s arms wide of my body. The posture has become second nature to me even though I have not had the occasion to defend myself in a very long time. And so we can learn to respond to the worst situations with mercy and grace even though our reflex is to give back in like manner as we have been given.

But absurdity? Can I learn to do the unanticipated thing, the thing unlooked for when facing injustice? The thing that stands so outside of what is supposed to come next that it throws everything else off course? I am willing to accept that maybe I am subpar in this regard, but I think not. I don’t think I could muster the presence of mind to be that creative in crisis. How then are we supposed to turn the other cheek, keep the left hand ignorant while the right hand does its work?

I think the answer lies in cultivating our innate gifts. When we react from the marrow of the unique being that we are, we stand a chance of delivering a response that is outside of the normal expectations. 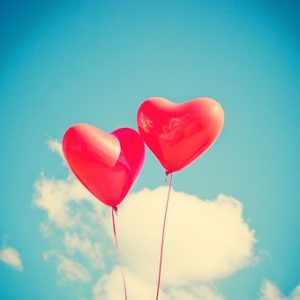 Think of it like this. If I’m a balloon, there’s two ways out of me becoming enamored with how full of air and balloony I am. Either I stay deflated so I never experience my “ballooness” (self-denial). Or I inflate to the point where I can no longer see the place where the air got in (radical self-acceptance). I’m just a balloon, that’s what I am, that’s what I do.

When I am living out of my talents, my strengths, I no longer perceive them as such. They are what I am. I am just being me, plain and simple. If someone comments to me, “Oh my goodness you, are so [insert descriptor here],” my reaction is “Well, jeez, thanks, but this is just who I am.”

Let me offer you a very mundane example from my life. I work most days out of an office that is shared by three other organizations. I arrived at the office early and needed to immediately use the bathroom (morning coffee, you know what I’m talking about.) After I used the facility, I noticed that there was feces smeared all over the bathroom. I know, completely gross, but that’s what happened. I was the first one to use the bathroom, and therefore, the first one to notice the mess. Immediately, I set about cleaning it up. I didn’t think about it. After I told the building manager what had occurred, he sent me an effuse thank you via email about how not just anybody would have cleaned it up. He was so impressed that I had just jumped right in. And I replied, “I couldn’t have imagined doing anything else.”

Again, this is a mundane (even profane) example and a situation I hope you never find yourself in. But I did what I did because I am innately hospitable. I want people to feel at home, at ease, in whatever setting I find myself in. I am always making welcome for others in small ways, because, I actually cannot help it. It’s like a tic. I don’t know any other way to be. Hospitality is one of my gifts.

And you should know that even as I’m typing the above, I’m already diminishing, already excusing that strength. Because it honestly doesn’t cost me a damn thing to act that way. It is who I am. I am hospitable.

Recently, we have seen acts of hatred on the rise. The humanity of certain people groups– immigrants, peoples of certain ethnicities, persons of opposing political persuasions, people who identify with a gender other than their biological sex, peoples of Jewish and Muslim faiths– is being questioned and in some cases officially nullified. How am I to react to this kind of injustice? What can I do to combat such systematic hatred?

I will ask you a different question: What gift do you have? What can you do that is so close to your person that you don’t even count the cost of doing it? That’s the first question. You need to answer it. The second is: have you equipped yourself in such a way that you can employ that gift in a moment’s notice? Have you offered that gift to groups in your community that are suffering injustice at this very moment?

And now for another mundane example: I am a writer. I have been since I could put words on a page. This essay, this meditation, it’s just who I am. It’s just what I do.