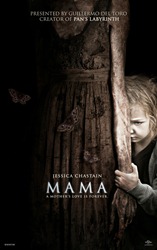 Mama, the new horror film from producer Guillermo del Toro opened this weekend. Overall, it’s a great horror film that will definitely creep you out. The film has a lot going for it – the effects are great, plenty of smart, atmospheric tension and scares, and a message about the dangers of helicopter parenting aimed straight for the Zeitgeist. Ultimately, though, Mama doesn’t quite land in the top echelon of horror films destined for infamy.

Comparing the resolutions of Mama and horror classic The Ring illustrates how important pay off is to a film’s success.

A quick proviso: talking about what scares people is always subjective. But even if The Ring didn’t scare you (it horrified me for years) and Mama haunts your nightmares, I hope you find my arguments compelling. If not, well that’s what the comments section is for

Both films have a lot going for them. They’re well-directed with creative, unusual ghosts. Both films take their time unraveling the ghosts’ mysteries while managing to ratchet up the tension. And both climaxes take decidedly unusual turns that break with convention.

What makes The Ring work just *that* much better than Mama is how carefully all the promises the first two acts make are paid off in the third. We see early on the gruesome results of Samara’s kills. But we don’t see how she kills until after we think the film is over. She crawls out of the TV, becoming a living television signal and destroys him.

Because who Samara is and what she can do follow an established set of rules (television), the terror we feel when we learn what Samara is bleeds backward to earlier events in the film and later, once our TVs go dark.

Because Samara fits within a narrative we understand, she haunts us well after the film is over.

Mama is equally terrifying – her body, broken from her fatal fall – bends and twist in horrific, unnatural ways. Her insane rage feels real and dangerous. But some of what she does doesn’t make sense. Why can she turn into a rug of hair that travels across the ground? (And how is traveling across the floor as a rug any better than floating through the same space?) Why does she wait to take the girls up the cliff when she’s been raising them for five years? 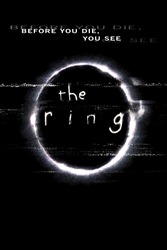 Mama and Samara are both terrifying. But Samara continues to haunt our TVs, while Mama is just a scary movie.

The Ring works better on a thematic level, too. Samara seems to Rachel (Naomi Watts) to be a scared, hurt little girl – that’s why Rachel frees her. That turns out to be a shockingly bad decision because Samara is actually evil. Her harmless façade played into Rachel’s motherly instincts so that Samara could wreak havoc on those Rachel loves.

Samara is a thinly veiled metaphor for television itself. Though we think it’s harmless, and let it babysit our kids hundreds of hours each year, television dumps toxins into our brains day after day not only through programming but through the multi-billion-dollar advertising complex.

Mama was well-poised to offer a similar morality tale about the power and danger of motherhood. Annabel (Jessica Chastain) doesn’t want to be a mother (a point that’s comically overstated), but is thrust into caring for two damaged, difficult girls. She bonds with them and grows to love them. Annabel overcomes her own desires out of love for children – a core aspect of motherhood.

And Mama, on the other hand, is a ghost who clearly mothers these girls out of her own need. Her care for and attention to the children is about herself, not about the girls. Much of what she does initially seems good, and only gradually becomes scary.

With these two images of motherhood clearly and skillfully established, Mama set up its third act for a showdown that challenges us to see the power of selfless love and the horror of distorted, needy love.

But we don’t get that.

The ending we get is good, and shocking, but it just doesn’t have the resonance Mama promised us.

That lack will ultimately keep Mama from becoming a horror classic. And that’s a shame, because the film is very good. Mama manages to be both tragic and terrifying, which is a difficult balance to master. The film deserves all the praise it’ll get. I just wish it had been a little bit more.

YOUR TURN: What did you think of Mama? What other horror films missed the pay off in the end?