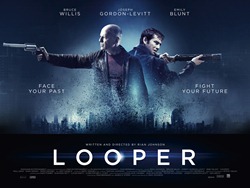 The world-building is phenomenal. The plot is straight-forward, but still wacky enough you’ll want to see it at least twice. And time-travel is handled expertly, with some ultra-cool implications inside the Looper universe. Oh, and the film’s got a ton of heart and a great story. But I’ll be dealing with that after the jump.

Fair warning, spoilers past this point…

(Just in case you were concerned about how well the Looper world holds together, here’s a great interview with the director explaining 10 Looper Mysteries.)

Loopers are more than just killers. They are themselves, if the world of Looper is to be believed, products of their environment.

In the film’s dystopian near-future, being a Looper (Looping? Loopering?) seems to be one of the only jobs that allows anyone in the world any social mobility. The Loopers enjoy a noticeably higher standard of living than everyone else we see in the city (who seem to be either prostitutes or vagrants).

The Loopers pursue a sort of rescue from the vagrant system. Their salvation comes through the violence of the Looper system: They kill in order to escape the crushing, omnipresent poverty of their day. But the rescue is false. Once they’ve closed their loop, they live on an inevitable 30-year-countdown.

Far from rescuing the Loopers from the violence around them, the Looper cycle makes them victims. All the money in the world (which, as Joe’s story illustrates, doesn’t actually go very far) can’t save them from themselves.

Looper critiques the myth of redemptive violence by illustrating that violence can’t ultimately rescue anyone.

Joe readily admits to Cid that his own path was carved out by the culture – he was the child of a vagrant woman. He lost his mother to violence, and early on was on his own. The violence he used to protect and provide for himself led him to be recruited by the Loopers.

And Joe excelled at being a Looper (Looperizing? He’s the Loopest?).

We see in his first Loop that he can’t escape from violence by violence. Instead, it costs him and his wife their lives.

Old Joe returns to his violence to try to save himself. By traveling to the past and assassinating the Rainmaker as a child, Old Joe hopes to destroy the system that cost him his life.

Joe realizes that his older self’s plan is fundamentally flawed: using violence to stop violence only creates more violence. Old Joe, himself a product of violence, may in fact create the Rainmaker with his violence. Killing Cid’s mother may in fact only ensure that Cid grows up to be the very person Joe was trying to stop.

(The beauty of the film is that we can’t say for sure if Young Joe’s plan worked. We don’t know Old Cid/Rainmaker’s motivation. Is he trying to stop organized crime? Is he shutting down Loopers? Is he only acting out of self-interest? We don’t know.)

Joe realizes that violence can’t be the answer. Only self-sacrifice can break the loop of violence that creates more and more killers. So Joe closes his own Loop.

This is the logic of Jesus’ sacrifice. While his contemporaries either lusted after the power they didn’t have (First-century Jewish longing for a war-making, political Messiah) or wielded their power with an iron fist (Rome’s eternal Empire), Jesus taught and lived a different reality.

Jesus claimed that Love was stronger than fear or darkness or even death. That only self-sacrifice can overcome the violence at the heart of humanity. That if we want rescue from the culture of death around us, we have to find the life on the other side of death.

The Death and Resurrection of Jesus offer us a way out of the Loop of Violence our culture glamorizes.

This is a rescue we desperately need. As long as this is going on, we’re stuck in the Loop. Today’s victims are tomorrow’s war-mongers. We have no one but ourselves to blame. And no one but Jesus to look to for rescue.

YOUR TURN: Did you like Looper? What did you think of its themes? Specifically, do you agree with its critique of redemptive violence?