I grew up next to a spooky, abandoned building. The two-story structure, dilapidated from years of neglect, had been an old company store for the miners who worked in the region. Our neighborhood bordered thick woods that ran down to railroad tracks flanked by a sulfur rich creek, mucky and orange.

During the first half of the 20th century, local miners and their families occupied the homes on my street. Each house bore the same basic design. They could use company credit at the company store, which sold everything you could imagine. You might recall the tale of the hard-working miner who owed his soul to the company store in the song Sixteen Tons, popularized in 1955 by Tennessee Ernie Ford and covered by dozens since.

Hear the chorus of Sixteen Tons

The store closed down in the mid-1950s, not long after my Mom and Aunt moved in next door. I spent much of my childhood losing baseballs, frisbees, and skin to thorny spikes of  the towering brush that grew wild around that lot every spring. Siblings and friends enjoyed using tennis rackets to launch crab apples at and through busted windows of all shapes and sizes.

A large concrete porch extended from the front doors to a rusty railing with steps descending down either side. The facade of that porch created a sizeable cement target that I threw baseballs against for years. Every rebound skipped along uneven grass and pavement, whistling back at me. I either snatched it up with my glove, turned to chase it into the woods, or watched new red marks turn to bruises on my skin. But I practiced for hours and each result improved my skill as a fielder.

However, Pittsburgh is an erratic climate, with only three truly great months of summer. Soon the weather would turn cold, and the polished leather of my glove would tighten in the chill of fall and winter.

But one sport perfectly withstood every season–hockey. 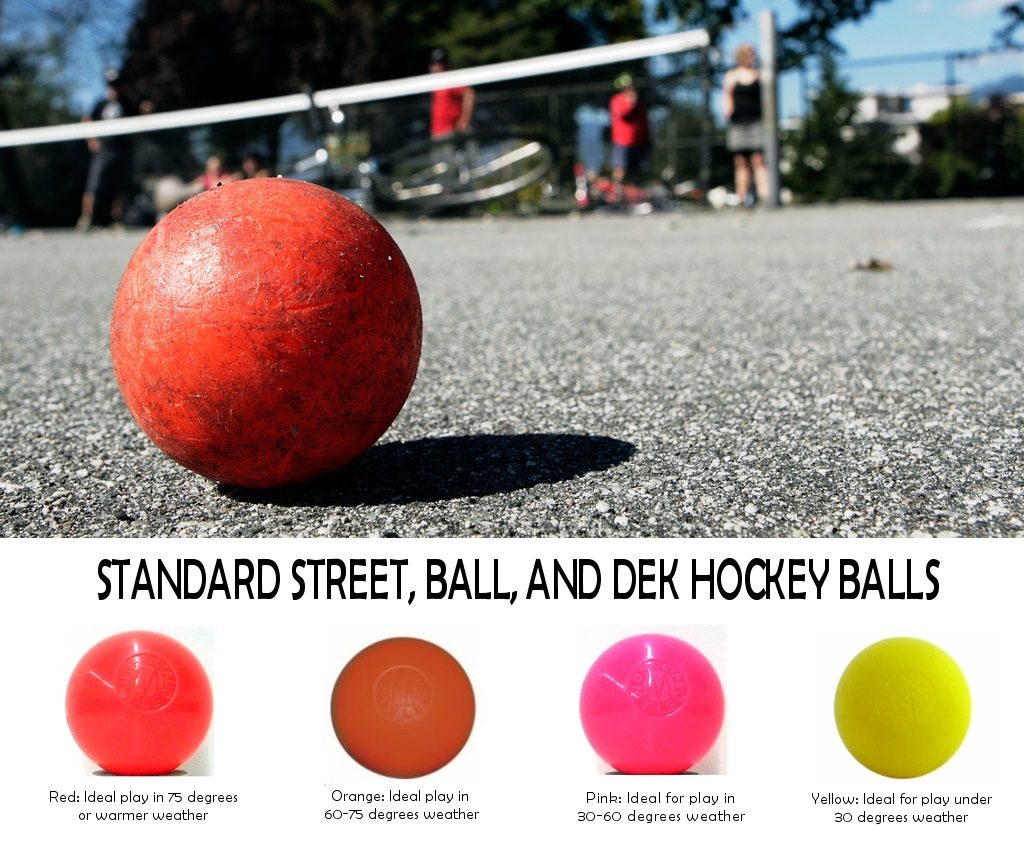 My Aunt took a can of black spray paint and made a round target smack dab in the center of the wall so I could practice my shooting accuracy. I imagined it was a portable hole like the kind in Who Framed Roger Rabbit, but the perfect shots I managed never vanished into another dimension.

Street hockey was spontaneous. A game could break out at any moment. All it took was someone dragging their PVC pipe frame goal with duct tape patched netting into the street. Play was frenetic in between shouts of “Car!” when the entire game could be moved aside for a passing vehicle and put back in motion in the time it took to wave back to a smiling motorist.

As you see from the above image, the colder the temperature, the harder the ball. We had blue in place of yellow for coldest months, and man did those blue balls sting when you got between someone’s shot and the goal to block a scoring attempt. But hockey is about heart and giving up the body as much as it is about skill and finesse, so the sport’s first lesson is learned quickly: You will pay a physical price if you hope to succeed in this game.

We played over the loose gravel of side streets and the dusty gymnasium floors during gym class. And when there was nowhere else to play we practiced stick-handling and shooting in basements, garages, and even kitchens. Yawning dryers were dented. Coffee mugs were shattered.

There is nothing soft about childhood goals. We raced around, all sweat and smiles, and dreamed of being the greatest players of all time. In Pittsburgh, that meant playing for the Penguins like the big guy–Mario Lemieux.

Sure, I loved baseball first as a little kid and dreamed of being a big leaguer. Over time, the football bug of the Pittsburgh Steelers got me too. But If I could only have one athlete guaranteed for life, it would be Mario. If I could’ve been great at sports and chased one game, it would’ve been hockey.

Notice the Detroit Red Wings hat I sported back then. While all my teams were Pittsburgh without question, I have always been fans of certain other great players. It wasn’t just how skilled they were but how they carried themselves off the ice too. Detroit had one such player.

Steve Yzerman, or Stevie Y, was phenomenal, so I sported his logo. In 2002, Canada took home Olympic Gold from the Salt Lake City games with Mario as Captain and Yzerman (and Joe Sakic who I also love) as Assistant Captains. Canada beat the U.S. in the gold medal game, and I’d be lying if I said I was rooting for America. For me, hockey transcends national allegiance.

Today, Yzerman is the General Manager of the Tampa Bay Lightning, the same Lightning who were the Pens toughest playoff opponent this year and took my “Boys of Winter” to the brink of late spring elimination. But the Penguins beat Tampa in Game 7. Did I mention who the current co-owner of the Penguins is? Yup, Mario Lemieux.

The Pens may only be entering their 50th season in 2017, but professional hockey has a strong tradition in Pittsburgh, far beyond my childhood and all the way back to the 1920s (yes, pre-Original 6) when the Pittsburgh Pirates were also a hockey as well as a baseball team. The first to use line changes, no less.

Blue-collar to its core, Pittsburgh has always been one of the top sports towns in America, so it’s no surprise the city played a role in the early years of the greatest game ever. Unfortunately, the silver spoon days of Carnegie and Frick were over by the 1920s, and the Great Depression spelled doom for professional hockey in the Burgh until the 1960s.

But I can just see those miners, the ghosts of my old neighborhood, strolling into the company store and picking up copies of the Pittsburgh Post to read about sporty Pirates who offered a form of escape from the grind of those dangerous coal mines.

Hockey was an escape for me too. The social dangers of junior high and high school were easily more terrifying than standing in front of a blistering slapshot or racing towards a brick wall for a loose ball as someone twice my weight barreled down to smash my skinny frame. It hurt. It was exhilarating.

I helped convince our principal to let us form a team in 8th grade. We held regular practices and managed to get another school on board for an exhibition by year’s end. Into my college years, some friends and I played on Friday nights at a local deck. We controlled the coveted 11PM-1AM time slot. I played goalie.

So you can understand why this past autumn my sister Shannon traveled from Florida to Dallas where I live so we could attend the Penguins season opener against the Dallas Stars.

Our Penguins lost 3-0. It was the beginning of three rough months for the team. Shannon and I had a blast.

Things began turning around for the team in late December. By the end of January, I attended All-Star Weekend in Nashville. While there, I had the opportunity to briefly visit with the ultimate trophy, the Stanley Cup which is awarded to the NHL champions every year. Individual names from the winning organization are permanently etched on the shiny base.

That look on my face is exhausted satisfaction. Exhaustion because, well, when you’re in town for NHL All-Star weekend you go hard. Satisfaction because it was my first visit with Lord Stanley’s chalice, undoubtedly the coolest trophy anywhere in sports.

I lightly traced my fingers over those famous names from 1991-92. Kevin Stevens. Ron Francis. Jaromir Jagr. Childhood heroes. I didn’t have enough time to study it like the history nerd and hockey fan I am, but I know the names of my other favorite captains were there too. Yzerman. Sakic. Mario.

If you want to see a bit of why this trophy is so uniquely special, check out the first three minutes of this well-made feature:

Pretty cool. So you can imagine how thrilled I am that my Pittsburgh Penguins, now led by Captain and best player in the world Sidney Crosby, just won their fourth championship in team history.

That last line about “Duper” refers to Pascal Dupuis, a great guy who had to retire because of blood clots that threatened his life if he were to continue. He only played 18 games this year. Along with his wife and five kids, he lives in my old hometown, pretty close to that old company store porch where I spent years firing shots for an audience of none, save the thousands of cheering fans in my imagination.

All these memories of playing hockey as a kid have me feeling nostalgic. I’m heading back to Pittsburgh soon for a visit. Maybe I’ll grab a stick and ball for old time’s sake while there. The old company store was rehabilitated more than a decade ago. Now families occupy neat little apartments inside the same old structure. My old cement porch and Aunt’s graffiti target are long gone. But I’ll bet I can find another wall to shoot at somewhere.

You can never turn back the clock, but you don’t need much to revisit the days of youth. All it takes is a fond memory and a bridge to the past, something timeless like the sound of a plastic blade scraping pavement with every shot, the swooshing sound as the stick follows through, the feeling of a perfectly struck ball. And a silver cup that allows even coal-born kids to feel like little lords as they race and shoot and dream of impossible goals.