You need to know that I really wanted to love A Good Day to Die Hard. 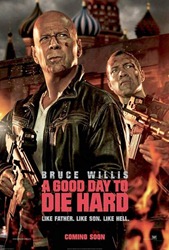 John McClane is my hero. I saw the original Die Hard way to young (though it was on USA). And I loved all the sequels. Yes, even number 2. I saw a midnight showing of 2007’s Live Free or Die Hard and love it.

So when I heard Die Hard 5 was in the works, I was ready. Ready to be blown away. Ready to follow an unwilling John McClane on another seat-of-his-pants adventure to save the world and stop some bad guys from stealing some money (it’s always about the money) while doing his best to be a family man.

So why did A Good Day to Die Hard fall so flat?

At first glance, Good Day has all the quintessential Die Hard elements. McClane is a family man – this time he’s trying to reconnect with his estranged son. Featuring McClane’s kids in the two most recent installments didn’t bother me like it does a lot of people. We met the kids in the first film, and I like to see how their relationship with John has grown up. It’s a nice way to preserve the heart his wife Holly provided the first two films without rehashing the on-again, off-again relationship they had.

As for action, Good Day had tons, and it was mostly really good. The direction was mostly good, and surprisingly easily to follow in the era of frenetic shaky-cams. The sets were big, the one-liners (uttered of course by McClane and Son) were plentiful and of course there was a con.

And yet… A Good Day to Die Hard was just missing something.

Part of it was a lack of any real villain. It’s probably too much to expect another Hans Grueber in a five-pete. But even Timothy Oliphant’s Thomas Gabriel was a lot of fun to watch chew through scenery. A Good Day to Die Hard suffered from an over-packed script. The original Die Hard took place entirely in a building. Die Harder was in an airport. Even Live Free or Die Hard featured the main villain Gabriel confined primarily to a trailer. Good Day lacked this focus – the film had to spend too much time to develop set pieces and get the McClane boys from one explosion to the next to build a great, compelling villain.

The other problem is perhaps inevitable in a 5th installment. Many critics complained in Live Free that John McClane had become a cartoon character. The fun of the first Die Hard was watching how much McClane went through to rescue Holly. He barely hobbles away, and we wonder how he can even do that. Each successive installment throws more pain at McClane, but it seems to affect him less.

In Good Day, this has become almost farcical. Let’s throw a car at him. No, shoot him with a rocket launcher! Throw him off a building!! Nothing… barely a scratch. The screenwriters seemed to assume that if they pepper in a few “I’m too old for this”-style jokes and have Junior offer a self-aware metaquip about how hard McClanes are to kill, we wouldn’t mind.

We minded. We want heroes who are a little vulnerable. We want everymen, not supermen. At least in an action film.

The film threw the entire country of Russia at John McClane and he barely seemed to notice. That took a lot of the heart out of what could’ve been a really nice reunion between a father and his estranged son. And that could’ve created a Die Hard worth cheering for. But when even John McClane looks bored, your movie is in trouble.

Is A Good Day to Die Hard worth seeing?

Sure. If you like Die Hard, you’ll find plenty to like in Good Day. But it’s not going to reign with the original. It’ll ultimately be a painfully forgettable installment in the franchise. Was there some good stuff? Sure. But overall, it falls short of Die Hard greatness, right down to McClane’s iconic line. Let’s hope 6 gets us back on track.

Bottom Line: A Good Day to Die Hard is a passable action movie, but doesn’t live up to the Die Hard name.

YOUR TURN: Did you like A Good Day to Die Hard?