As the new J.J. Abrams Star Wars movie The Force Awakens finally arrives to dominate our culture once more, I figured it was time to finally commit to watching the original Star Wars trilogy.

Yes, despite being a movie-obsessed Gen Xer known for ridiculous levels of pop culture affection, I simply have never been a Star Wars guy.

I know a lot about the films and have seen large chunks of them, but I was never implanted with the generational gene demanding me to freak out with praise for the most successful financial sci-fi property (I’m guessing) in history.

But now I’m all in for posterity’s sake and have recorded a journal of my experience watching the original film for the first intentional time as a full grown human.

People always ask me how I’ve never seen Star Wars. I always say I think I have, just not in a normal straight through way that I remember. Although I’ve seen so many huge chunks of them so many times that surely I’ve seen a lot of them.

But time to set right this oversight. Here then are my reactions as I recorded them when I recently sat down to finally give Episode IV a full viewing as an adult. Off we go then.

1 minute mark: I’ll be curious to see how far this movie goes before I see something I don’t recognize. Maybe I’ll recognize all of it. Also curious to see if I get excited about this original story as I attempt to establish an emotional connection as an adult.

I haven’t seen the prequels btw. Tried to watch Episode I twice, but fell asleep both times.

5 min: Annnnd Princess Leia is down. Good strategy there your worshipfulness, running around all alone.

8 min: Lord Vader ain’t got time for her highness’ lies. As if she’s just a diplomat who’s running around shooting at Stormtroopers.

10 min: Gotta love the scene transitions in which George Lucas apparently invented the “horizontal swipe” that MicroSoft PowerPoint would one day implement. I mean, there’s cultural impact numero uno for this franchise.

13 min: I know there’s a lot of talk about how Kurosawa influenced Lucas, but this scene with R2-D2 getting carried off by little dudes in tiny, brown cloaks is straight out of The Wizard of Oz.

25 min: The humans in this movie are dressed like they’re from ancient Greece, except for Luke’s aunt who apparently shopped at Sears in 1976.

28 min: 3PO would be more interesting if he was voiced by Mr. T.

34 min: Lightsaber sighting. Seems like there’s no way a kid in this world wouldn’t know about the existence of a weapon that cool.

38 min: “I find your lack of faith disturbing.” Look at the nerve on this guy, back talking Vader like a sucker.

45 min: Oh, you can find a pilot Luke. And he’s THE best. Still haven’t seen any scenes I’ve never seen before. Beginning to think I have seen this whole movie multiple times.

47 min: I appreciate the arm getting chopped off, especially after the gross corpse on Tatooine.

48 min: HAN! If this is the reason the world and I got Harrison Ford as Indiana Jones, then Star Wars legacy is capitalized with his appearance here.

51 min: I’ve never understood why it matters who shot first.

[Update: I’ve since learned that I was watching Lucas’ do-over version in which he made Greedo shoot first. Have heard a couple of major nerd outs over the scandal].

53 min: Okay, first surprise. This scene with Jabba the Hut is in this first movie. I thought it was second? Does Leia end up in that space bikini in Episode 4? Asking for a friend.

55 min: Okay, the bikini IS in the next one. Guess I’m getting my Jabba scenes confused.

64 min: Kind of easy to get distracted by text messages. I want to like this movie so much; otherwise, I feel like I’ll be letting Marshall and Ted from How I Met Your Mother down. 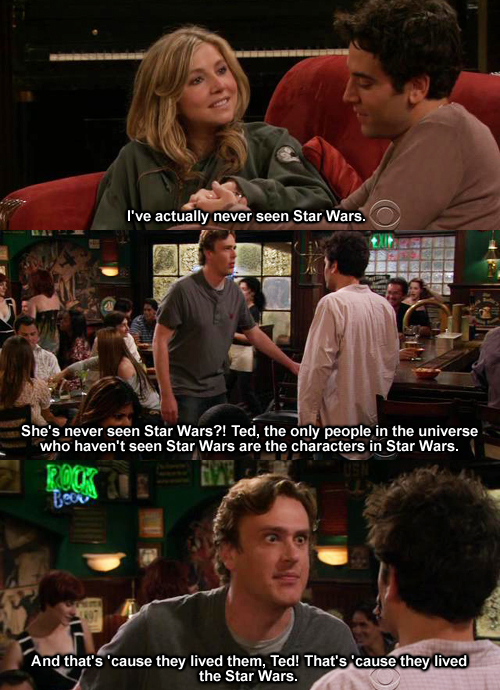 68 min: Chewie is to Star Wars what Hurley was to LOST.

74 min: Now Home Alone, there’s a movie you can watch over and over. Not sure why I just thought of that, but it was made for kids and is more fun. The Goonies too.

76 min: Okay, Luke has showed up to meet/rescue the Princess. Can’t say I have strong memories of this, but still it’s familiar. Maybe my interest always kind of wains around the one hour mark.

80 min: Carrie Fischer’s mom is Debbie Reynolds, who was a co-star in Singin’ in the Rain. Now there’s a great story.

81 min: This monster pulling Luke under in the trash chute reminds me of The Princess Bride. That’s another movie I can watch dozens of times and enjoy so hard.

83 min: Stormtroopers are so gullible, they’ll fall for anything. And they love guns, even if they don’t know how to shoot them. And they fight for an evil cause. They must be Donald Trump supporters.

89 min: How can this many people using lasers be so terrible at shooting?

90 min: That’s the second really cool shot of Han shooting on the run.

92 min: The big fight between Darth and Obi-wan. Did they film this in slow motion? Not exactly Inigo Montoya versus the Dread Pirate Roberts.

100 min: The team gets an engineering lesson on the Death Star from legendary country singer Kenny Rogers.

104 min: They’re gearing up for the big assault on the Death Star. Some of this seems unfamiliar, but I know I’ve seen all the stuff that’s about to happen, so I must’ve just not paid much attention here whenever I watched this in the past.

105 min: Then again, I remember all these times Luke hears Obi-wan’s voice.

106 min: I’m trying to imagine college students in 1977 getting as excited about this film as I did in 1999 when I saw The Matrix. Guess it’s hard to know how boring movies were before this unless you were there.

112 min: This chase fight scene is still going on in case anybody was wondering. At least none of these pilots have been in the movie until now, so there’s no danger of any emotional investment in them before they die. Not exactly Top Gun here.

116 min: One of these characters is bound to show an emotion or different facial expression at any moment. I’m just sure of it.

117 min: And Han’s back! It’s about to get interesting again.

118 min: I agree with Stan Lee. The Death Star is the stupidest design ever, what with one point of fatal vulnerability.

Wait, where’s Luke getting his hand cut off? Ohhhh, that’s Empire Strikes Back. Okay, now it makes sense why I was never sure if I had seen all of Empire because I couldn’t remember how it ended. But it ends with that fight between Luke and Daddy Skywalker.

So I HAVE seen the first two Star Wars movies.

Now that it’s over, I gotta say that A New Hope is just not that great of a movie. It’s a cultural phenomenon and a technical touchstone in the film industry, but not a movie that is highly enjoyable on multiple levels as an adult.

The story isn’t perfect. The acting isn’t the greatest. The fight scenes drone on at times. Minor characters are not well developed.

I simply lack the youthful nostalgic connection so many of my peers have with this particular film. One of the reasons Star Wars is so dominantly popular is because this is the greatest film of the childhood of all the geeks who ended up taking over the world, and they’ve been dominant now for a generation.

Parents show these movies to their children in a special, bonding moment. As my friend Eli says, “You can only watch your child’s eyes once as they realize for the first time that Darth Vader is Luke’s father.”

I’ve since watched Episodes V and VI and definitely didn’t recognize the first half of Empire Strikes Back. That movie is genuinely great.

As for Return of the Jedi, well, turns out I didn’t know most of that one. Most significantly, I was unaware of Vader’s turn away from the Dark Side! Not quite as good as Empire but solid. Vader’s end is neat but also completely misaligned with Episode IV and good storytelling in general. I guess I’m not the first person to see how obviously the creators had no clue where the story was gonna go when they made A New Hope.

So my personal opinion is appreciate Star Wars for a number of reasons (youthful nostalgia, technical visionaries, massive cultural impact). But ultimately I need more fun from a film like Episode IV.

Thankfully, Episode VII is amazing and great fun. I will be watching that one over and over.

What do you think? Is Star Wars: Episode IV overrated or am I talking like a drunk in the cantina?