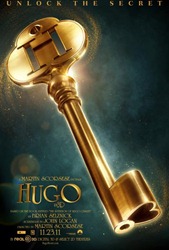 Hugo is Martin Scorsese’s first foray into animated, family-friendly fare. An orphan who lives in a train station in 1930s Paris discovers that an old toy-maker who works in the station is actually the famous filmmaker Georges Melies (Sir Ben Kingsley). In his quest to restore a broken automaton he and his father were repairing before his father died, Hugo restores hope to Melies.

Hugo is a love letter to Film. The movie praises cinema’s enduring power to bring us together.

We first meet Melies as the nameless toymaker from whom Hugo steals toys so he can repair his automaton. When Melies captures Hugo and obtains the notebook filled with Hugo’s father’s drawings of the automaton, we have no idea why the notebook reduces Melies to tears. We only know that Melies is a sad, bitter old man. 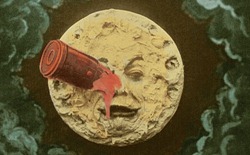 Meanwhile, we explore Hugo’s universe – the train station – with him. Hugo winds all the clocks, acting as a sort of an unseen hormone regulating the station, keeping everything working. Hugo has obviously inherited his father’s aptitude for machines, as evidenced when he restores the automaton to fully working order. It draws the scene from Melies’ most famous film of the bullet-shaped space ship hitting the man in the moon right in the eye, then signs Melies’ name.

Hugo and his new friend Isabelle – Melies’ ward – quickly learn the truth of who Melies really is: a famous pioneer in the art of film. 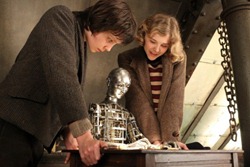 Scorsese’s metaphor is fairly transparent: Melies is as broken as the automaton he created so long ago. And Hugo embodies the childlike optimism and idealism that heals the older generations when the wheels of time grind them down. Hugo’s affinity for machines is not a love of mechanics. It springs from the same creative impulse Melies once possessed.

In Hugo, Melies sees a much younger version of himself, and this vision becomes his salvation. Though Melies felt the world of film had passed him by, leaving him an old, broken-down, outdated and irrelevant artist. But in adopting Hugo and nurturing his fresh talent, Melies discovers a new meaning for his life he’d long lost.

Melies’ fate awaits all of us: no matter how gifted, we’ll all eventually be surpassed. Our hope lies in raising up the next generation. 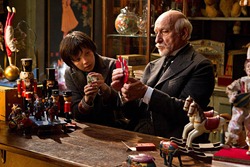 Turning 70 this year, Scorsese is no spring-chicken himself. Hugo masterfully demonstrates his love for the medium to which he’s dedicated his life. It’s a beautiful, well-paced film, and the two child stars do well enough to support the film. As the Baby Boomers begin to retire, Hugo is a good reminder that if you’re not dead, you still have something to offer those coming behind you.

Bottom Line: A solid film that manages to be more than just a love letter to Film, Hugo paints a beautiful picture of what can happen when the generation gap is bridged.

YOUR TURN: Did you enjoy Hugo? Whom are you mentoring? Who is mentoring you?