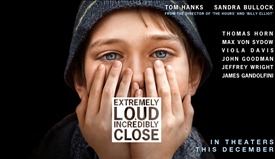 Nine-year-old Oskar Shell lost his father Thomas (Tom Hanks) in one of the Twin Towers on 9/11. Oskar has Asperger’s and in an effort to socialize him, Thomas concocted elaborate quests for Oskar. Unbeknownst to Oskar, the quests had no actual prize – their purpose was solely to force Oskar to interact with the rest of humanity.

In the wake of Thomas’ death, Oskar tries to find some meaning or purpose.

Oskar discovers a key – which belongs to someone named Black – among his father’s possessions. Oskar’s convinced that his father planned one more Quest for him. So he sets out to visit every Black listed in the New York City phone book until he finds the key’s owner.

Of course, Oskar can’t succeed in his Quest. The goal – a sixth borough of New York City – never existed, and Thomas didn’t leave the key for him. That they key was in Thomas’ closet at all was a mistake, a fluke, as Oskar finally learns near the end of the film.

The Quest imposes order on the chaos of death. It helps Oskar to make sense out of a tragedy too big to comprehend. 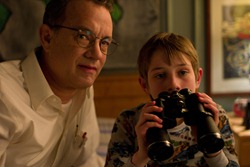 Early in the film, Oskar and his mother clash over Oskar’s comings and goings. Oskar’s rage demonstrates how desperately he needs his Quest to shield him from his grief. The Quest provides certainty in the face of Death’s randomness. His mom (Sandra Bullock) tries fruitlessly to break through Oskar’s defenses, to help him to face his grief:

I don’t know why a man flew a plane into a building… No matter how hard you try, it’s not going to make sense because it doesn’t.
It. Doesn’t. Make. Sense.

When he learns the key was never meant for him, Oskar’s anger and sadness overcome the denial that’s been powering his search through the city. Weeping, Oskar destroys everything that’s been propping up his illusion – the tools of his quest.

Confronted by the senselessness of his Quest, Oskar finally comes face-to-face with the pain he’s been avoiding. 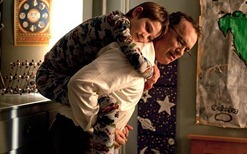 Not until Oskar embraces the hopelessness of his grief that he can heal. He realizes his father isn’t coming back. That no matter how much he wishes it did, life doesn’t always make sense. That the only way forward is to make the best with what we have.

Oskar finally embraces his mother, rides on the subway and swings – all the things he couldn’t do while his father was alive. He marvels to his mom that nearly ever person he encountered had also lost someone or something. Ironically, Thomas’ final non-Quest did what the other quests hadn’t. Oskar comes out of his shell, overcomes his fears and faces the future less afraid.

It’s no secret our culture doesn’t face death well. We don’t know how to grieve. 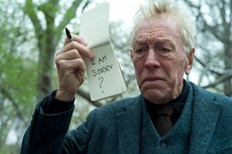 Extremely Loud & Incredibly Close would tell us that we can never make sense out of much of the pain and suffering in our world. Maybe our time would be better spent embracing those still living. Death is the one universal human experience, and at least on this side of the grave, our common grief can unite us as little else can.

Bottom Line: The core themes are solid, but the film as a whole is overly sentimental and exploits rather than builds on the tragedy of 9/11.

YOUR TURN: How well do you think we handle grief? Where have you seen us cling to illusions of stability in the face of uncertainty? Oh, and did you like the film?