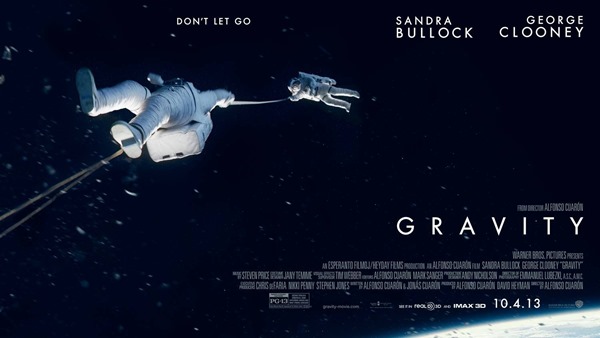 Let’s get this out of the way up front: Alfonso Cuaron’s latest film Gravity is one of the best I’ve ever seen. Reviewers are calling it a near-perfect cinematic experience and they’re right. You need to see this film, and see it on the biggest screen possible. IMAX 3D if possible. I hardly ever say that – Pacific Rim was the last film that deserved this sort of praise and Gravity blows it out of the water.

I’m sure once I’ve calmed down a little and seen it a few more times I’ll find some pock marks. But when the credits rolled, I wept and felt nothing but a joy so profound I was speechless for a few minutes afterward. I’ll be shocked if it’s not my best picture of 2013 because right now it’s ahead by light years.

Everything about Gravity is perfect. But what makes it great is its mythic celebration of life embodied in Ryan Stone’s (Sandra Bullock) arc.

Spoilers for Gravity after this point.

There’re two kinds of space movies: movies in space and movies about space. The former use space as a setting – think Star Trek, Star Wars, the later Alien films, etc. – but it’s not much more than that. The latter, what we might call Space Films, use outer space as a metaphor to explore something fundamentally human – films like 2001: A Space Odyssey, Alien and Moon. These films capitalize on the infinite, inhospitable nature of space to reflect on what makes us human, or, more rarely, on God. Space, in this regard, truly is the final frontier, the last hostile, inhuman realm where monsters might still very well lurk.

Space occupies that dangerous, mythic region of our cultural consciousness that once belonged to the seas.

Gravity, obviously, is a Space Film. Through Ryan Stone’s character, we’re cast into the unknown, confronted with despair and unable to see a way forward. We quickly recognize Stone’s repeated grasping for the smallest handhold, fighting desperately, wildly for purchase: she’s fighting for life. She is an astronaut trapped in infinite space, but she is also a human trapped in the abyss of despair. 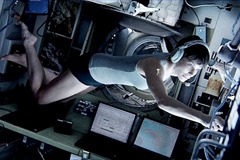 Would you say a prayer for me?
I’ve never prayed. I don’t know how. No one ever showed me. — Stone

Stone is literally trapped by death. The loss of her daughter some years before has paralyzed her with grief. Now she exists, but she doesn’t live. The difference plays out in the disabled Soyuz capsule, when she surrenders to the cold grip of space, letting go of her will to exist because she doesn’t have a compelling reason to live. As she shuts off her oxygen – literally giving up her final breath, she offers up her first prayer.

Gravity warns that we can’t cling to both life and death. To hold on to one is to let go of the other.

Kowalski (George Clooney) is the film’s Christ-figure. He not only dies so that Stone can live, he also shows Stone that life is inherently worth fighting for through his constant marveling and whimsy.  Stone offers up a prayer to him and he comes to her rescue: not in the form of tangible rescue, but by inspiring her to live. Never having been taught to say “Amen” at the end of her prayers, Stone offers up a contextually-appropriate “Roger”. She lets go of her daughter’s memory, trusting her with Kowalski, and grabs onto Life with both hands for the first time in the film.

Once Stone decides to live, every moment of the third act is a frantic, frenetic fight, an insane affirmation of the beauty and goodness that is living.

Gravity’s mythic scope reaches its pinnacle in the final moments of the film, when Stone crashes into the water.

Her struggle to escape first the capsule, then her suit and finally the water itself weaves together multiple images of new life: she is a child emerging from the birth canal, struggling for a first breath, crawling and learning to walk. She is life evolving on planet earth, swimming out of the water to crawl, then stand on land. She is the one described in Colossians 3 who takes of the clothes of death that she might wear the clothes of life. She is the Hebrew myths of life itself: escaping the chaos and death of Sea, awakening on the earth from which she came, standing and looking proudly to Heaven.

Stone – perhaps a callback to Adam, whose name means dust? – rises to her feet. She is reborn, made new. She is life itself having overcome darkness. That soaring score reaches its crescendo as she takes the first few staggered steps of her new life and we cannot help but rejoice. In letting go, Stone has found something truly worth holding onto. As someone famous might have said, she only found her life once she’d truly lost it.

Bottom Line: Gravity affirms the inherent goodness and beauty of life in language that can’t help but be religious. Terrifying, awesome, stunning and beautiful.

YOUR TURN: What did you think of Gravity? Did the religious themes work for you?