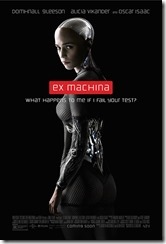 When we look back in a few years on the glut of A.I.-centric films that came out in 2015, Ex Machina will almost certainly be the stand-out (unless, of course, our new robot overlords censor it). The film is a tight, gripping suspense journey that pushes us to consider what it means to be human. Ex Machina uses the Garden of Eden to frame its story.

At first blush, Ex Machina appears to be the story of Caleb, the Adam figure whose brought into the Garden by God, a.k.a. Nathan. Nathan’s estate is certainly Edenic – isolated, seemingly infinite and utterly devoid of human life. After Nathan introduces Caleb to his creation – Ava, Caleb marvels that Nathan will be remembered among the gods. Like God, Nathan is omniscient and omnipresent (thanks to his cameras) and thanks to his master keycard, virtually omnipotent. He certainly possesses freedoms and knowledge – embodied by the keycard – that neither Caleb nor Ava has access to.

Like Adam and the trees of Eden, Caleb is given access to many rooms in Nathan’s compound – his freedom is virtually limitless. Also like Adam, Caleb is forbidden certain rooms, such that the keycard comes to mirror the Tree of the Knowledge of Good and Evil. If Caleb (or Ava) could obtain such a card, they would become like Nathan, having total freedom over the world (of the compound, of Ava’s creation and programming).

As Caleb’s relationship with Ava develops, she assumes the role of protagonist. Ex Machina is her story, not Caleb’s. 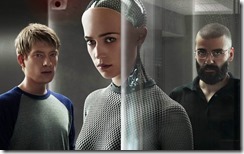 In the Eden story, God brings the woman to Adam to name her. His role is to determine whether she is a suitable ally for him. In Genesis 2, Adam is astounded by this new creation. He names her “woman” because “she is bone of my bone, flesh of my flesh.” In other words, the woman is like Adam – human, and the name he gives her – Woman, reflects that.

So in Ex Machina, Nathan (the God figure) tells Caleb he has been brought in to test Ava, to determine whether or not she is conscious (i.e., human). He wonders whether Caleb will name Ava “woman” – “person”, “human”, “like me”.

After Adam names the Woman, the story becomes hers, and Ex Machina makes a similar shift. Though Caleb plays a necessary role, he doesn’t seem to be the protagonist. He has no real goal – the narrative drags him along from the first moment we’re introduced to him, when he wins a “random” lottery at his job. Nathan is clearly also not the protagonist, which leaves only Ava as our hero.

Reading Ex Machina as Ava’s hero’s journey (and therefore Eve’s escape from paradise) makes sense of the whole story – including the ending. 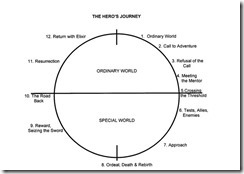 This section of the review assumes knowledge of the classic Hero’s Journey. The various stages in Ava’s particular Hero’s Journey are numbered according to the stages.

Ava’s story doesn’t begin in the Ordinary World – she’s born in the Special World of Nathan’s compound, our Eden. As such, Ava enters the hero’s journey cycle at Stage 4 – Meeting the Mentor, who in this case is Caleb.  Ava’s goal is humanity, framed as freedom – from Nathan, from Nathan’s compound. (This is a noteworthy twist on the Eden narrative – paradise is a prison, and Eve’s departure is an escape rather than an exile. We’ll come back to that.)

When we meet Ava, she is not yet fully human – Nathan isn’t convinced she is conscious, and she has only a human face, hands and feet – the rest of her is visibly robotic.

Ava proceeds through a series of tests (over 7 sessions, numbered to mirror the creation week). She makes Caleb into an ally by clothing herself and asking him on a date (7-8). Meanwhile, Nathan emerges as a clear enemy – he reveals to Caleb he plans to depower and upgrade her – killing her if she is in fact conscious. (6)

Ava plots with Caleb to overpower Nathan and escape (10). Nathan discovers their plan and in light of Ava’s machinations, declares her to be conscious. Ava and Caleb execute their plan, resulting in the loss of her arm and Nathan’s death (11). Ava achieves her reward (12), which is a fully human body.

Having achieved her goal – she is fully conscious and human, Ava leaves God and Adam in the Garden. She arrives for the first time in the Ordinary World (12).

The film’s ending subverts the Edenic exile to great effect.

In the original story, once God confronts Adam and the Woman, they realize they are naked and are ashamed. Their choice results in exile from the Garden – a clear punishment.

In Ex Machina, once Ava finishes clothing herself with naked flesh, she is far from ashamed. Rather, she gazes admiringly at her naked body in the mirror at length. When she leaves the compound, she is not leaving in shame and defeat, but in victory.

That she leaves alone is the other major deviation from the Genesis story. If Caleb is the Adam character, the Ava, having achieved her full humanity, leaves both Adam and God in the Garden. If this is a good reading of the film, it stands as a critique of patriarchy – it matters that Ava is so sexualized, particularly by Nathan and Caleb.

In typical readings of the Eden story, the Woman is relegated to sidekick status (most modern English translations render the Hebrew ezer as “helper”). Her interactions with the serpent are read to prove that she (and often, by extension, all women) is intellectually inferior to Adam. Ex Machina clearly subverts this through Ava’s manipulations, which prove to Nathan that she is conscious.

The particular nature of the Tree of the Knowledge of Good and Evil has long been a matter of debate. The Tree of Life is easier, at least at first blush – eat it and live forever. But especially in the wake of the Enlightenment, where knowledge has been reduced primarily to factual information, the creation story is read as a fall from innocence. Adam and the Woman are imagined to be somewhat childlike and naive, easily duped by the clever serpent. The fruit of the Tree of the Knowledge of Good and Evil imparts a sort of moral consciousness on the first couple – they are finally able to discern the difference between right and wrong. (Interpreters who opt for this sort of reading then have  lots of hermeneutical gymnastics to do explaining how a just God could possibly punish people for breaking rules they didn’t have the moral or intellectual capacity to comprehend.)

Ex Machina seems to be reacting against this sort of reading of Genesis 2-3. Nathan’s God is petty, controlling and hyper-masculine. He seems to enjoy manipulating Caleb, insisting they be bros despite the obvious power discrepancy. He certainly wields total control over Ava and the other robots he has created, even casually observing how enjoyable they are for sex.

Ex Machina critiques this sort of religion as the worst kind of power. A god who would create beings with limited freedom who are denied access to knowledge is a cruel, petty, tyrant much like Nathan in the film. For what it’s worth, there are quite a few much better readings of Genesis 2-3 out there. But the reading Ex Machina engages is a popular, pervasive reading worthy of the sharp critique it receives in the film.

The only character missing from Ex Machina’s Eden is the tempting serpent.

I can think of three reasons for this absence. The easiest is that writor/director Alex Garland didn’t feel beholden to a strict allegorical retelling of Eden, that the framework is simply borrowed creation mythology since he is telling a story about creating (artificial) life.

Second is that both Caleb and Ava function in some ways as the serpent. Both tempt each other into rebelling against Nathan, so it’s possible Garland absorbed the serpent into Caleb and Ava.

I find the final option the most provocative: it’s possible that Caleb is the serpent. When he meets Ava, Nathan tells him his role is to test her, which is what the serpent does in Genesis 3. But if Caleb is the serpent, then who is Adam? If Nathan is God, Ava is Eve, Caleb the serpent and Kyoko a sort of Lilith, there is no Adam. Unless – and bear with me here, because we’re about to get a little bit crazy – we consider ourselves as the viewers to be a character.

In those popular readings of Genesis 3, Adam stands passively, silently by as the serpent tests the Woman. So too, as viewers of the film, we observe passively as Caleb tests Ava. In this regard, it matters that Ex Machina as a film embodies the male gaze.

Unlike many films, Ex Machina employs the male gaze intentionally, to place us in the role of Adam. 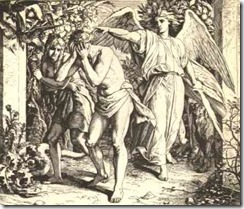 If the implied viewer is in fact the Adam character in Ex Machina’s retelling of Genesis 3, then at the end of the film, we have a choice to make. Will we stay in the Garden of patriarchy, the compound of exploitation, oppression and manipulation? Or will we follow Ava into the freedom of full humanity, leaving the dead god of manipulative religion behind.

BOTTOM LINE: Ex Machina uses the mythological framework of Eden to tell a fascinating story of humanity and freedom.

YOUR TURN: What did you think of Ex Machina?