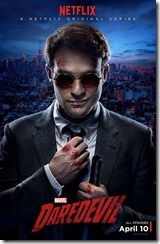 If you haven’t at least started Netflix latest original series DAREDEVIL by now, you’re missing the best superhero fare available right now in television or film. DAREDEVIL is better than the Marvel Cinematic Universe. It’s better than Agents of S.H.I.E.L.D. – and easier to punctuate. It’s better than Arrow and Flash, just barely – and you know how it pains me to write that.

Forget the 2003 travesty (which I refuse to blame on Affleck). This is a comic book TV show for comic book fans. And Daredevil has always been the underrated underdog. Marvel has their Spider-Man and their Wolverine and now their Avengers who everyone loves. But the truest fans have always had unending respect for Matt Murdock, the Devil of Hell’s Kitchen.

DAREDEVIL works because it expertly embodies the tension that made the comic such a success. 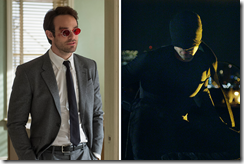 Matt Murdock is blind, but he can see better than everyone around him. He’s a lawyer and a vigilante. He’s a devout Catholic, but takes on the persona of a devil.

DAREDEVIL doesn’t waste any time introducing us to the contradictions that are Matt Murdock. We breeze past the accident that takes his sight and grants him his heightened senses. We don’t discover how he learned to fight until the middle of the series.

Instead, the first real scene of the series is Matt Murdock in a confessional booth, asking forgiveness for what he’s about to do – become a vigilante. Matt tells the priest, Father Lantom, a story about his father, Battling Jack Murdock, an amateur boxer who achieved a bit of notoriety in Hell’s Kitchen when Matt was a kid. Battling Jack was never a great boxer – he lost more than he won, but Matt remembers he was never knocked out.

What troubles Matt are the moments when his father’s eyes would go dead and he would rain blows down on his opponents, becoming an unthinking, unstoppable force. According to Matt, his grandmother used to say, “Those Murdock boys got the Devil in them.”

We quickly learn that Matt is afraid of this same transformation in himself. He is about to cross a line – the thin blue line, if you will – and become a vigilante. He’s spurred on by anger at the continuing injustice he sees in Hell’s Kitchen.

Matt is afraid that by crossing the line to become a vigilante, he is letting the Devil within him loose on the world.

This inner conflict rages from the second scene on the docks – when Matt nearly beats a sex-trafficker to death – throughout the show. Even as Matt advises Foggy and Karen not to resort to illegal measures to win justice against the true devil of Hell’s Kitchen – Wilson Fisk.

Fisk and Murdock are dark mirrors of each other. Both believe they are doing what is best for Hell’s Kitchen. Both will resort to violence to achieve their goals. And they are pitted against each other.

Most importantly, both men are products of violence.  Fisk’s father Bill, is not too dissimilar from Battling Jack Murdock. Instead of losing in the ring, Bill Fisk loses in a local election. But rather than express his anger in socially acceptable ways (like, say, a boxing ring), Fisk beats his wife and child, until a young Wilson strikes back, accidentally killing his father to protect his mother, and setting the child on a path of violence.

As adults, Fisk and Murdock reflect their fathers – Fisk wants to do well but his anger spills over in decidedly uncontrollable ways – he decapitates a man with a car door, for instance. Matt, on the other hand, channels his rage into his vigilantism, rescuing and protecting the innocent.

But always, beneath the veneer of Matt’s fight for justice is the fear of letting his Devil out.

First, he hangs a man from a rooftop and admits he hurts the man in part because he enjoys it. Then, after Fisk hires a junkie to kill Mrs. Cardenas, the elderly woman Matt, Foggy and Karen have been working to help through legal means, Matt decides he must kill Fisk.

In episode 9, appropriately titled “Speak of the Devil”, Matt returns to the priest for the first time since the pilot. He questions whether Father Lantom believes in the Devil. The priest confesses that in seminary he didn’t. Later in life, he witnessed a warlord execute a village elder in Rwanda, and in that moment, he believed in the Devil.

The priest was confronted with true evil specifically because he witnessed the suffering of innocence and goodness at the hands of the powerful.

He was unable to do anything about that particular abuse, but in response, Matt asks whether the priest would stop the devil if he could.

Murder is clearly on Matt’s mind – after getting Fisk’s measure at Vanessa’s art gallery, Matt returns to Father Lantom one more time. This time, he recognizes that to kill Fisk means the damnation of his soul. But he questions how he can not kill Fisk when it means the further suffering of the innocents of Hell’s Kitchen.

There is a wide gulf between inaction and murder, Matthew. Another man’s evil does not make you good. Men have used the atrocities of their enemies to justify their own throughout history. So the question you have to ask yourself is, ‘Are you struggling with the fact that you have to kill this man but don’t want to, or that you don’t have to kill him but want to?’

In the face of Matt’s silence, Father Lantom quotes Scripture:

‘Like a muddied spring or a polluted fountain is a righteous man who gives way before the wicked.’ Proverbs 25: something… I never can remember.”

Matt: “Meaning the righteous have a duty to stand against evil.”

One interpretation. Another is that when the righteous come to sin, it is as harmful as if the public well was poisoned. Because the darkness of such an act – taking a life – will spread to friends, neighbors, the entire community.

Matt: What if it already has?

Then we wouldn’t be sitting here would we?

Father Lantom recognizes a war is being waged for Matt’s soul. The war is specifically over what lies within Matthew Murdock. Is he a devil or an angel? 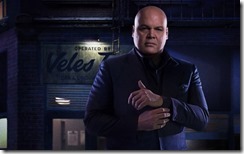 Matt chooses to try to kill Fisk and is punished for it – he nearly dies, Foggy learns his true identity and he loses the law firm. (All this is only temporary of course, but it represents the end of Act 2, the low point of Matt’s Hero’s Journey where he metaphorically dies and is resurrected.)

Matt learns that he cannot face the Devil with the Devil’s weapons – he will always lose, even if he defeats Fisk. Rather, Matt must become something greater than the Devil of Hell’s Kitchen. He must use his anger to wage a holy war for the denizens of Hell’s Kitchen.

That’s exactly what he does – Matt the vigilante uses his abilities to aid the law, to prevent those who attempt to circumvent the law from succeeding, to force them back into the arms of justice to face their just desserts.

Matt’s journey is instructive for those of us who follow Jesus. Too often, we equate anger with sin, as though the two are one-to-one correlations. But anger is an emotion, created in us as surely as joy or love or generosity.

Anger often leads to sin – Jesus warns us in the Sermon on the Mount that anger is a shortcut to soul murder. But Jesus himself cleanses the Temple and his anger burns against those who would deny healing on a holy day. Much like Matt Murdock, Jesus is moved to anger when he encounters injustice. 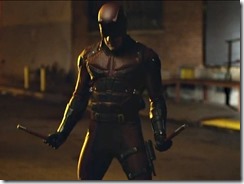 So too, we who follow Jesus ought to be provoked to anger when we witness that which should not be in our world – injustice.

We need Matt Murdock’s caution as well. Anger can make us into devils, if we’re not careful. We can become the very thing we hate. In our anger, we must not sin. This is a difficult distinction to learn, but we can keep the fruit of the Spirit before us – in our anger, we cannot stop being loving, joyful, peaceful, patient, kind, generous, gentle, faithful or self-controlled.

In this, we have Jesus as our guide. And hopefully (thanks to a second-season pick-up), we have Matt Murdock as well!

YOUR TURN: What did you think of DAREDEVIL? What makes you angry?