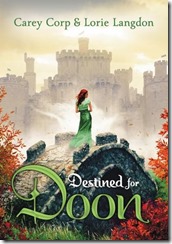 Destined for DOON is the second of four books in the DOON series written by Carrie Corp and Lorie Langdon. If you’ve read DOON, then you remember that the first book ended with Veronica and her best friend McKenna defeating Addie, the evil witch, and Veronica becomes Queen of Doon, the mystical realm protected by God and out of time. Veronica becomes Queen and finds her true love in Jamie, the former prince of Doon.

While Veronica and Jamie experienced a Calling – a vision of your One True Love many residents of Doon experience, McKenna and Jamie’s younger brother Duncan only fall in love. It doesn’t seem to be destined. So McKenna leaves Doon for the the real world of musical theater (an unintended irony?), breaking Duncan’s heart. But in the post-credits stinger Epilogue, McKenna learns that she has in fact had a calling. That her childhood imaginary friend was actually Duncan. That she might, in fact, be Destined for Doon.

Book Two opens on a McKenna living her dreams in the “real world”. But is all as it seems?

Of course not, or there’d be no book. None less than Duncan himself shows up, gloomy, aloof and pouty, to whisk McKenna away from her leading role and sexually-harassing director. Something is up in Doon, and Queen Veronica has convinced herself only McKenna can solve it.

Though McKenna gets back to Doon in short order (thanks to the magic rings from book 1), Destined struggles for the first several chapters to find its footing. McKenna spends a lot of time sad about Duncan, sad about being back in Doon, sad about leaving again and worried about Veronica.

The danger facing Doon – a pretty sweet zombie fungus slowly eating the kingdom and its inhabitants, takes a back seat to McKenna’s return for the first little bit.

But once the girls turn their attentions to the kingdom, Destined for Doon really takes off.

Veronica and McKenna are at their best when they’re working together to overcome impossible odds. It was true in the first book and it’s true now. The drama with the boys fades into the background as the girls fight against a threat with real stakes.

Veronica’s arc in Destined for Doon really shines as well. Though she’s become Queen, she hasn’t earned the crown – not in the people’s eyes, Jamie’s or (most importantly) her own. The conflicts between her and Jamie feel earnest – they grow organically from the kinds of persons each character is, as well as the practical reality of what comes after the “Happily Ever After” Veronica seemed to be getting at the end of book 1. 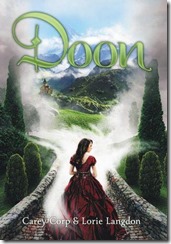 As for McKenna, her own personal resolution worked far better for me than how her relationship with Duncan unfolded. Much like Veronica in the first book, McKenna must come to terms with herself (and does so without being rescued by any knights in shining armor). Everything with Duncan simply feels too forced to me – it falls into the category of “Why didn’t they just have a real conversation 300 pages ago?” (To be fair: this is a genre failing – I feel the same way in basically every romantic comedy I have ever seen. Don’t fault Carey or Lorie for playing by the rules!)

Everything you loved from the first book is here again.

The girls’ friendship is as strong as ever, and a source of strength rather than conflict. The boys are better developed this time around (especially Jamie), and once the plot takes off, it’s fast and fun. And of course, there’s a killer stinger at the end that sets up the next book nicely (and if you’re reading closely, there’s plenty of foreshadowing!).

BOTTOM LINE: Destined for Doon is a worthy sequel that expands on the world, grows the characters and sets up further adventures. Fans of the series, rejoice!

YOUR TURN: Did you enjoy Destined for Doon?

Disclosure of Material Connection: I received this book free for review purposes from the author. I was not required to write a positive review. The opinions I have expressed are my own. I am disclosing this in accordance with the Federal Trade Commission’s 16 CFR, Part 255: “Guides Concerning the Use of Endorsements and Testimonials in Advertising.”