The story of the Nativity is one of Western civilization’s most beloved stories: the young Virgin Mary and her faithful husband trekking to Bethlehem. No room in the inn, their baby, the son of God is born in a manger. Angels singing. A star. The wise men who followed the star, their gifts of gold, frankincense and myrrh.

The Nativity is the central story of our culture’s biggest holiday. Does anyone dare mess with it?

Seth Grahame-Smith dares. Author of the excellent Pride and Prejudice and Zombies and Abraham Lincoln: Vampire Hunter, Seth has already established himself as a slayer of sacred cows. So how does he reimagine the Nativity?

Seth recasts the wise men – he sticks to the traditional three: Balthazar, Gaspar and Melchior – as bandits. No longer magician-astrologers (as Matthew indicates) or kings from the East (as Tradition tells us), Balthazar is the Antioch Ghost, a Syrian bandit who is the scourge of the Eastern Roman Empire. Finally caught and imprisoned by Herod the Great, he encounters the other two as fellow prisoners. After their daring escape, they make it to Bethlehem where they hole up in a stable on the outskirts of town. A stable serving as a temporary home to a very scared couple and their newborn baby.

Like Seth Grahame-Smith’s previous books, Unholy Night works because he reimagines the story without straying from its essential themes. 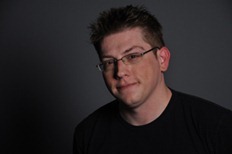 Pride and Prejudice is a withering critique of civilization – the carefully-maintained artifices surrounding Elizabeth and Mr. Darcy are shallow and ridiculous. Any zombie book worth its gore makes the same criticism of modern civilization. So the two fit (dismembered) hand in (fancy) glove.

Slave-owners literally made their living from the life-blood of other humans. If Abraham Lincoln was crusading against them, is it really such a stretch to imagine he’d take on vampires too? Seth thinks not, and it’s why Abraham Lincoln: Vampire Hunter works.

When the three bandits set out to make their escape from Bethlehem, for instance, they are horrified to find Herod’s soldiers slaughtering Bethlehem’s infants. Seth doesn’t shy away from the reality of what happened, and the bandits’ shock mirrors our own:

Why make the magi into bandits? By framing the story with characters who live outside the current political structure, Seth zeroes in on the explosive political drama surrounding the first Christmas.

Though we’ve reduced it to a cute manger scene, the first Christmas story was a tale of the fall of Empires with the Advent of God’s King.

The villains of the story are rendered beautifully: aloof Caesar Augustus, playing chess with his Empire, young, aspiring Pontius Pilate and old, brilliant, ruthless and mostly-mad King Herod. At first, they can’t believe a mere baby is any sort of threat. In Herod’s throneroom, we hear the ruthless old king chide one of his prophets:

Would you have me go and tell Augustus that he should fear a child who may or may not exist? That Rome should recall its mighty armies from Gaul and Germania and lay siege to the town of Bethlehem? Do you have any idea what a fool he would think me?

The prophecy is clear, Your Highness. The Messiah shall topple all the kingdoms of the world. Even yours. 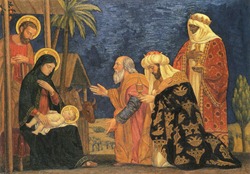 So of course the three bandits decide to help the Holy Family escape Herod’s clutches. These are men who’ve been excluded from the culture. Rome’s injustices have forced them to the margins, and they’ve learned to live well.

These bandit-magi are precisely the kinds of people Jesus came to. They are exactly the right sorts of Christmas guests.

What follows is an adventure story. It’s got twists and turns, soars to grand heights and plummets to dark, ugly places. But what makes the book so much fun to read isn’t just the fast, well-paced plot. Unholy Night‘s characters are what really draws us into the story, makes us care even when we know the kid makes it to Egypt safe and sound.

Balthazar embodies this well, as any main character should. Seth creates a rich, lush character history that he unfolds masterfully. Balthazar – and to a lesser extent his traveling companions: Mary, Joseph, Melchior and Gaspar – feel real. We understand them. We empathize with them.

Empathy is vital when the plot is as grand as the birth of the Son of God.

Balthazar’s spiritual journey is surprising and inspiring. The clever, ruthless, callused bandit we meet at the beginning quickly gives way to a man who has an unmistakable soft-spot. As we learn more of Balthazar’s story, we  hurt for him. The more we learn of his tragic story, the more we ache for this man whose atheism stems from hatred.

When we finally learn the terrible secret of Balthazar’s life, the singular event that changed everything, we learn that he:

He knows that this is his fault… And he knows that somehow, some unseen power is punishing him for what he’s done with his own life. All of the unforgivable sins he’s committed. He knows that God hates him… What God could do this? Only a God who hates.

The triumph of Balthazar’s story is his slow realization that God is not an aloof, deterministic deity giving and taking away on a whim. Rather, God is a father who sent his son into the world as a helpless child. God is a warrior opposing the Caesars and Herods of the world, along with all their injustice.

God is always working to bring about happy endings, no matter how rough the ride.

As Balthazar reflects towards his journey’s end:

Nothing could surprise him anymore, nor could anything discourage his faith that no matter what storms there were ahead, God, or whatever you wanted to call it, would deliver them.

Unholy Night is just a fantastic story. It’s funny. It’s tense. The characters feel real. And the Epilogue… I was speechless. It was marvelous.

I’m confident this will be one of my top 10 of 2012, and has definitely made its way onto my must-read list for the foreseeable future.

Bottom Line: No matter the time of year, Unholy Night is a Christmas story that tells the old, old story in a fresh, fun way, without compromising its revolutionary core.

YOUR TURN: What did you think of Unholy Night? Did you enjoy Seth’s take on the Christmas story?