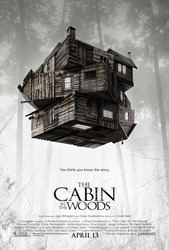 A culture’s Monster Stories tell you a lot about that culture. What we fear, what we consider off-limits or taboo is a window into what we actually value.

So it’s fascinating that the horror film genre is so predictable. Even after the first Scream told us the unspoken rules of horror films, few filmmakers have bothered trying to buck the genre conventions.

By dissecting our contemporary monster story formula, The Cabin in the Woods tells us five unfortunate truths about ourselves.

Director Joss Whedon uses standard horror film tropes to hold a mirror. If we’re brave enough, we can see some interesting truths reflected back at us.

1. Hollywood is more interested in money than good stories. 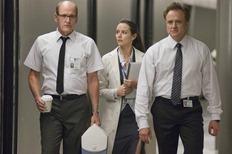 Whedon fans who still miss Firefly can rage against the two suits who treat the film’s ritual sacrifice as just another day at the office. They’re just doing a job. There’s no heart, no soul in anything they’re doing.

We’d like to pretend that network and studio execs love a good story as much as we do, but it’s just not true. At the end of the day, they’re making stories to sell advertising. If the stories don’t appease the fans, they don’t get paid. Their livelihoods are in jeopardy.

But then… maybe we don’t actually care that much for a good story: 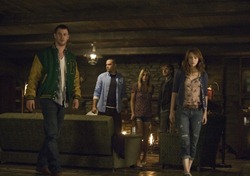 The classic horror story plays out for the first two acts – the kids find the cabin. They proceed to settle in, go swimming in the lake (not quite skinny-dipping yet) and then start drinking and getting high.

The five friends settle easily into the predictable horror film tropes we’re used to. There’s the jock who is (of course) dating the slut. The slut has a not-as-pretty friend who’s a virgin, while the jock has a nerdy friend who wears glasses. And then of course, they bring along their anti-establishment, pot-smoking conspiracy-theory spouting friend to be the comic relief.

We learn that the THEATER AUDIENCES old gods demand the MOVIE sacrifice include the deaths of these characters. That the people have to be subsumed into these roles. 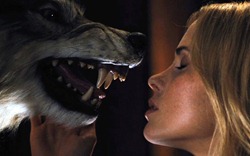 But even as the film introduces these familiar roles, it critiques them. Shortly after their arrival to the Cabin, Marty (the pot-head/Fool) points out that none of them are themselves. Curt (the jock/Athlete) is playing the stereotypical meat-head, but he’s actually a bright academic. Jules (the slut/Whore) isn’t usually so promiscuous.  And multiple characters make it clear that Dana (the Virgin) isn’t a virgin.

But all of these real, well-rounded, multi-layered people must be reduced to Roles for the sake of the PLOT ritual. The STUDIO EXECS guys running the ritual use a whole slew of chemicals and tricks to ensure that the kids play their parts. That rather than be themselves, they act out archetypes.

It’s a clever, thinly-veiled critique of what the box-office numbers tell us about ourselves: We don’t like well-rounded, well-developed characters in horror. Not to mention… 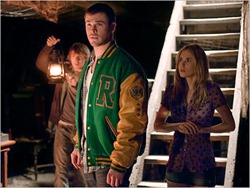 The sacrifice gets underway when the students "discover" the trap door. The cabin’s basement is filled with a huge assortment of weird objects.

It turns out that any one of the objects in the basement will summon some horrific trope to murder the teens. The guys in the office make it clear that it doesn’t matter which object they choose. In fact, the office even has a pool going (spoiler alert: the hillbilly zombies win!).

Get it? All horror movies are the same plot, just with different bad guys!

That’s funny because it’s true. We don’t want to think in a horror film. We want a predictable plot peopled with tired tropes instead of real characters. Why? Because…

4. Horror films fill a vouyeristic need we have. 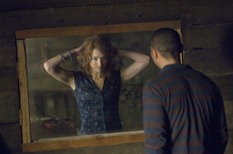 The Cabin in the Woods‘ most striking achievement is how thoroughly it skewers and subverts our expectations as the audience. Consider, for instance, the brilliant scene where Holden (the Scholar) learns his room connects to Dana’s via 2-way mirror:

It’s a classic horror film scene: the necessary nude scene before the killing begins. (The mirror is covered by a picture of slaughter… subtle, right?) The audience is Holden, watching women disrobe through the 2-way mirror of the cinema screen.

Holden proves himself to be more noble than we are: he looks away, alerts Dana to the room’s secrets.

The Cabin in the Woods demonstrates repeatedly that how we consume horror films strays into voyeurism. We enjoy watching the sex and violence… as long as it’s happening to those other people. Why? Because…

5. Our love of horror is a twisted need for a sense of justice. 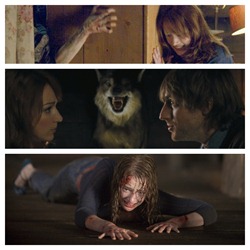 By the time Cabin in the Woods reaches its third act, the film has crossed into full-blown commentary (somehow without compromising on plot and entertainment – it’s one of the most satisfying conclusions I’ve seen in ages).

The two surviving tropes (Virgin and Fool) break into the film studio ritual facility and learn that they’re characters in a horror film sacrificial victims. In order to make a ton of money prevent the end of the world, each of them has to die, except for the Virgin. It doesn’t matter whether she lives or dies; the movie sacrifice is successful as long as she suffers. That’s an important statement about why we watch horror films:

On some level we need to participate in punishment. Horror films let others suffer in our place. 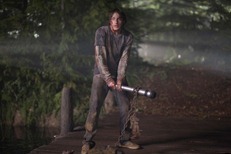 The Cabin in the Woods‘ opening credits display human sacrificial rites from human cultures throughout history. Whedon portrays the vicarious violence of horror films as an extension of the human impulse to assuage our corporate and individual guilt through the suffering of others.

The film asks us to examine why we’re sitting in the seats. Most of us saw the film without any clear idea that it was anything other than a horror film. So we didn’t come to participate in the parody.

What does the enduring popularity of horror films (and, for that matter, all penal models of sacrificial atonement) say about us?

Like most every culture that’s ever been around, we understand that our culture, our nature is flawed. That’s the same old plot everyone knows, and we’re all part of that story (whether we’re jocks, sluts, nerds, fools or virgins). We crave justice, but we don’t want it for ourselves. We like the idea of someone else suffering in our place. So we watch horror films.

That’s got its own problems (more on that in another post). But still… not bad for a horror flick, right?

Bottom Line: In addition to being fun and scary, The Cabin in the Woods asks us to take a long look at WHY we consume horror films.

YOUR TURN: Did you see The Cabin in the Woods? Did you agree with its take on horror films? Why do YOU like horror?