A recent article in Christianity Today is asking: Who’s in Charge of the Christian Blogosphere? In it, Anglican Priest, Trish Harrison Warren, illustrates the expansion of female Christian bloggers online, some of the factors that lead to this boom, and then argues for such bloggers to come under some form of formal authority within the Church. I both agree and disagree with many of Warren’s observations, and have been intrigued by the discussions of her piece that bloggers have been having online. In that realm, here’s my two cents for why we need to continue to allow Christian bloggers, male or female, to explore theology in the public arena of the internet, whether they are under a formal church authority or not.

You may object that I am making a political argument to address a faith issue. Talk to a believer from a closed country and you will understand how important this is. At my seminary, I talk with students from closed countries who really are astounded now that they are in the US at the freedom of thought that is afforded them, let alone freedom of speech. Looking at our culture there’s more and more speech policing taking place, not all of it bad either. But we need to make a distinction between calling out racism and sexism and silencing others. Because when we silence others we are silencing ourselves and we want the opportunity to openly share the gospel to be ours as long as possible.

Another point raised by some of my fellow female bloggers online (that Warren fleshes out well in her article) is that they took to online to express their theological explorations and faith because there wasn’t space for them to do so within the Church. Brothers and sisters this ought to be to our shame. Author, blogger, and theologian Sarah Bessy puts it this way:

I attend a seminary in Texas where the student population is still only 1/3 female. Yet I have seen considerable progress in evangelical culture in the past four years, where we have taken steps towards affirming that women both should be and are theologically educated. I have been extended considerable freedoms of theological expression in my classrooms and in my papers. But I don’t want to only dialogue with the educated, I want to talk and listen to layperson theologians about our faith. So, I blog. And I read the comments and I open the doors of conversation. Are we surprised that it is no different for many women?

No person, from Christian Blogger to Ph.D. holding Theologian should be your standard of orthodoxy. The word of God is infallible, people are not. How could we have forgotten this? Or as author and theologian Anthony Bradley observes:

As my pastor recently pointed out to me, we tend to treat orthodoxy and faithfulness to scripture synonymously. But Orthodoxy is defined by the creeds of the church, and many of our objections to different views as “unorthodox” are actually contending with secondary, not primary doctrines. If earning a seminary degree has taught me anything, there’s more room within Orthodoxy than most evangelical Christians would like to admit. We think orthodoxy always looks like us.

In other words, the usually implied standard in a critique of online Christian bloggers isn’t just orthodoxy. It is the expectation of almost total agreement with ourselves in doctrines and in values. That’s not a standard we place on our best friends, or our spouses, or our kids, so why not extend equal grace to those we read online? We understand that the people in our lives aren’t going to get it right every time, and we need to stop this ugly trend in Christendom where we place a Christian leader on a pedestal, mass consume all of their materials, and then the instant they show a diverse opinion from our own, ostracize them and throw them away like a used tissue. We’re better than that.

As believers in Christ, we have got to get better at this. Both with believers and non-believers. The scriptures don’t say we will be known to the world by our theological acumen and stalwart orthodoxy, but by our love. This doesn’t mean I need to just silence myself when I see a theological point or observation in an online source that doesn’t ring true to me. It does mean that I use that point of disagreement as an opportunity to open a dialogue highlighting what I agree with and disagree with. If you think a blogger is promoting a heresy, rather than comment block him or her, how about you do the harder theological work, and with grace in your word choices give the scriptures, doctrines, or creeds that show why you disagree.

This also means not assuming that if my friend shares an article on social media that he agrees with everything in that article, point for point, thought for thought. And if I don’t agree with it, reading it anyways. As frequent guest writer for Christianity Today and theologian Nicole Morgan points out, we need diversity in our influences:

If you don’t keep conversational partners online or off that disagree with you, how will you continue to have a complex and realistic view of people and culture? I have an atheist friend online who defies the stereotypes of her beliefs, not nihilistic, a strong rebuker of “survival of the fittest” who values all persons, and one of the most out-spoken opponents to suicide of her generation. I have other friends who voted for our current president, but who will protest at the Dallas airport on behalf of refugees. People are complex, and we ought to see them that way.

A community organizer and activist put it this way:

One of the ways that we can serve others is to learn how to disagree well and in love. After all, if a beer commercial can model this well, how much more so the Church? 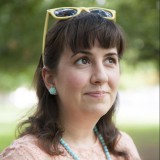 Sarah Eleanor Frase lives in Dallas, TX, where she moved to earn her Master's degree in Media Arts and Worship at Dallas Theological Seminary. She's a blogger, visual artist, performer, and avid sci-fi consumer (even since before dystopias became so trendy). Would you like to know more? Visit: thewritefrase.com