This town deserves a better class of criminal. — The Joker 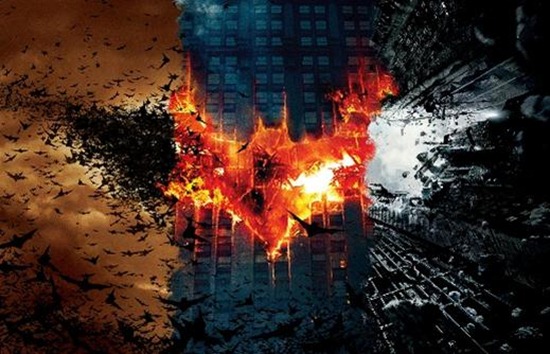 Building on what Act I established, Act II brings the conflict into the open. The main character tries to solve the problem, only to find his situation worsening. He learns that he lacks something that keeps him from his goal.

A year after Batman Begins, Gotham is a better place. Batman, Gordon and the new DA, Harvey Dent, have organized crime on the run. Batman’s mission to save Gotham by inspiring hope seems to be working. Bruce begins to hope that he might be able to retire the Bat-mantle. To live an ordinary life in a Gotham saved from its corruption.

Enter the Joker. The Joker arises as a response to the Batman. If Batman inspires hope, calls people to be better than they are, the Joker exudes chaos. He calls out the worst in people.

Like the archetypal Fool, the Joker seeks to undermine the main story, to point out the foolishness of the main character and his quest.

The film’s central conflict revolves around Harvey Dent, the new DA. His Bat-inspired war against organized crime has earned him the nickname “Gotham’s White Knight”, and Harvey embodies all of Bruce’s hopes for Gotham.

Harvey represents everything Batman hoped to inspire: an ordinary citizen who chooses to fight evil.

The Joker recognizes this, so at both the macro- and micro-level seeks to reveal the base corruption of humanity. The Joker wants to prove that Gotham really is fallen because people are fallen.

All Batman’s attention is on Gotham itself. Though throughout the film, he’s a step or two behind the Joker, he finally manages to stop the Joker from destroying the two ferries, and the Gothamites on the ferries all choose not to kill each other to save themselves.

Gotham does seem to be changing. Batman seems to be winning (albeit at great cost: Rachel Dawes’ death).

The Joker, however, reveals that the ferry plot was not his final gambit. Rather, while the Dark Knight has been distracted, the Joker targeted the White Knight. It turns out that when Harvey lost Rachel, when he came face-to-face with true evil, Harvey broke.

Harvey embraces the Joker’s vision of chaos, and goes on an avenging killing spree. Gotham’s White Knight, their champion and new symbol of hope, falls into the Abyss.

Batman’s mission failed: he wasn’t enough to inspire Harvey when it really mattered.

When Gordon and Batman see what Harvey has become, they despair. Standing over Harvey’s dead body, faced with the undoing of all they’ve worked to achieve, Batman and now-Commissioner Gordon make a terrible choice. They blame Batman for Harvey’s crimes and lie to Gotham, telling them that Harvey died a hero.

Batman flees into the dark, alone, hunted and vilified by the city he’s trying to save.

Batman’s failure at the close of Act II indicates that he still lacks something essential. He cannot complete his mission – to be a symbol that inspires the hope Gotham needs to overcome fear – until he gains this missing skill or knowledge.

Despite Batman’s best efforts, Gotham’s salvation rests on a lie that covers a failure. The implied question is, How long can that foundation last?

YOUR TURN: What did you think of The Dark Knight‘s conclusion? Was Batman’s partial-victory satisfying, or did you want something more?