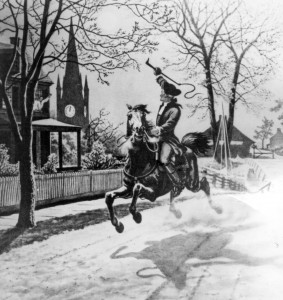 AMC is replacing zombies with American history this week as the apocalypse gives way to a great revolution. Expect the cable network’s new show Turn to be edgier than high school history class ever was. But hopefully Turn will be far more educational also.

As a teacher for nearly a decade I know our national history IQ isn’t as sharp as the point of a Redcoat’s bayonet. Come to think of it, do you know who the Redcoats were? That’s just one of the basic bits of knowledge you’ll need going in to this new show which plops us in media res (in the midst of things)–the fall of 1776 to be precise.

Here then are 7 important points you’ll want to sharpen up on before you turn on Turn. Then you can drop knowledge bombs like George Washington on everyone you know.

1. What is the American Revolution?

American colonists were ruled by the British until the original 13 colonies banded together, began calling themselves states, and declared their independence from King George III and Parliament. That Declaration of Independence was written by Thomas Jefferson and approved by his boys in Congress on July 4th 1776  which is why Americans eat too much and blow stuff up each year on that day.

Another way to think of the conflict is to remember that American colonists were British subjects, so the Revolution was actually an English Civil War.

Check out my video on Causes of the American Revolution

2. Redcoats is one name for British soldiers 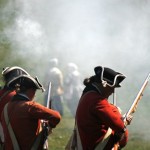 As if the well trained, well paid, well fed British Regulars weren’t formidable enough, the colonists faced even more enemies called Hessians. You’ll likely hear about them in Turn. Hessians were German mercenaries–soldiers for hire–employed by the British government. They first arrived in New York at Staten Island on August 15, 1776. Some 30,000 Hessians made up about 25% of British forces during the Revolution.

After the first major skirmish at Lexington and Concord in Massachusetts, the early leaders of America, calling themselves the Continental Congress, created the country’s first official army. It was commanded by George Washington of Virginia. The army built upon standing militias already in place, armed citizens defending their homeland. Original age of enlistment was 16 years old but 15 year olds could also sign up with parental consent.

Watch my video on the Continental Congress and outbreak of America’s Revolution for more. 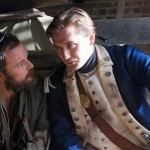 We should probably address the obvious question: Did this spy stuff really happen? Yes. The Patriots needed every bit of help they could get, espionage included, so we can forget the old adage that George Washington never told a lie. In fact, he commanded a clandestine network built on using deception.

The man in charge of Washington’s spy ring was Benjamin Tallmadge who will be portrayed in Turn as will Tallmadge’s friends Caleb Brewster and Abraham Woodhull. The show is based on their group known as The Culper Ring, so called because Abe Woodhull’s code name was Samuel Culper.

Check out my video on Ben Franklin’s Snake & propaganda of the American Revolution.

Plenty of colonists refused to support the revolution. They called themselves Loyalists, as in staying loyal to their king. The Patriots called them Tories (or sometimes Royalists or King’s Men). Historians estimate that some 15% of the nearly three million people living in the colonies were Loyalists. So the challenge wasn’t simply avoiding guys in red coats but discerning which neighbors were friend and which were foe.

6. War was just as horrid then as it is now

Many people stop learning about history when teachers are still obligated to use lessons plans rated G or PG. War is always hellish and horrific though. The farther back you go in time, the more intimate the nature of battle. Since Hollywood has given us little more to visualize the American Revolution in recent years than The Patriot, you might not expect the brutality and gore I anticipate from AMC’s special effects team.

The people who fought during the Revolution were warriors. They risked their lives and left families in danger to fight the British. It was a desperate struggle with as many as 50,000 casualties, half of whom died. Remember how far behind medical knowledge was in the 18th century. They still used leeches for bloodletting! 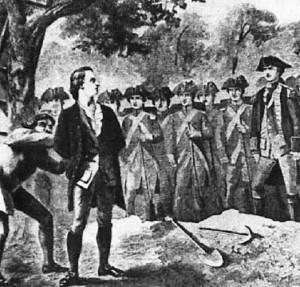 Since the show begins in the fall of 1776 I imagine Hale will have to at least be mentioned if not portrayed. He is one of America’s first heroes, a graduate of Yale by the age of 18 who became a teacher before joining the cause for freedom and turning spy. Captured and sentenced to death, Hale’s famous last words before being hanged are preserved through the centuries.

“I only regret that I have but one life to give for my country.”

Nathan Hale was only 21 years old at the time of his execution.

So there’s some solid background. I only regret that I have but one blog post to give for previewing this new show. If you’re curious about any other aspects of Revolutionary America ask away.

Your TURN: Is this show for you?