The end of a story is always a huge clue to how we should interpret that story. Comparing the endings of two films that released (to wider audiences, anyway) against each other this weekend makes for a fascinating comparison, especially since both films are asking the same question.

Zero Dark Thirty is the Oscar-nominated story of the CIA agent responsible for finding and killing Osama bin Laden. Gangster Squad is the fun-but-forgettable story of how a small squad of vigilante-cops drove mobster Micky Cohen out of Los Angeles. (This “inspired by a true story,” by the way, is almost entirely fabricated.)

Both films acknowledge the effectiveness of violence, but question if the ends justify the means. 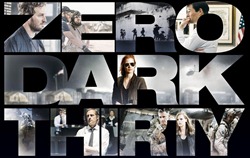 Zero Dark Thirty controversially portrays the CIA torturing Al Qaeda operatives. Gangster Squad portrays lawmen who circumvent the Law to take down a mobster. And both films point out how effective the means are to accomplish their respective ends.

We’d almost certainly have failed to kill bin Laden without the information we acquired through torture. And thanks to the Gangster Squad (at least in the film), Los Angeles has been largely without organized crime since the 1950s.

But both films also acknowledge the terrible price of violence. Zero Dark Thirty‘s Maya transforms from a mostly-innocent twenty-something into a hard woman with no personal life and who’s lost everyone in her life who might have been considered a friend. The Gangster Squad faces escalating violence that results in civilian casualties and the death of Officer Keeler (Giovanni Ribisi), the conscience of the team.

Is the effect violence has on us worth it? The films’ resolutions to this question differ dramatically.

Zero Dark Thirty ends with Maya collapsed in tears, weeping over what she’s lost. Though her decade-long quest to kill bin Laden has ended successfully, it’s unclear whether her win is truly a victory in her own soul. As many reviewers have noted, this is the point of the film: to force us to confront whether our decade-long War on Terror has been worth the price we’ve paid both in human life and in the stains we’ve accumulated on our national soul. Zero Dark Thirty only frames the question for us, steadfastly refusing to answer.

Not so with Gangster Squad. After several of the squad explicitly wonder if there is any real difference between what they’ve become and the monster they’re fighting in Cohen, the film resolves in unquestioned success. Cohen is arrested and the squad disbands in success. Police chief Parker announces their victory in front of City Hall. The shot opens at the top of the building, on which is engraved a quote from Abraham Lincoln:

Lincoln’s characteristic eloquence lends itself to the film’s stance on violence: what separates the good guys from the bad guys is the rules. Cohen trusted only in his own power, while the Squad trusted in Right/the Law/America (it’s not a coincidence that the specter of World War II looms so heavily over this film – that was the last war in which America was unquestionably fighting for the Good).

According to Gangster Squad, so long as our cause is just, whatever we do is right. We need not worry what violence does to our souls.

Gangster Squad‘s message is dangerous, and from a Christian perspective flat-out wrong. Jesus warned in no uncertain terms the deadly effects violence has on our souls (Matthew 5:21-26, for instance). And his own example demonstrates that we must trust God to bring about redemption in the face of violence, not fall to the same violence our enemies wage on us.

Maya’s breakdown reminds us of a question Jesus asked:

What do you benefit if you gain the whole world and lose your soul? — Mark 8:36

Our violence has a real cost. Zero Dark Thirty forces us to face what we’re becoming. Gangster Squad, on the other hand, wants to pacify our fears by baptizing our violence in righteousness. And while it’s certainly easier (and more fun) to listen to the Squad, our choice should be a no-brainer.

YOUR TURN: What did you think of the two films’ stance on violence?