Leah Cypess is the author of Mistwood, Nightspell, and, just released, Death Sworn

From the back cover: 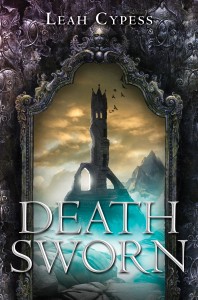 Ileni is losing her magic. And that means she’s losing everything: Her status as the renegade sorcerers’ most powerful rising star. Her purpose in life. The boy she loves. Her home. Exiled to teach sorcery to the assassins hidden deep within the mountains, she expects no one will ever hear from her again. The last two tutors died within weeks of each other. As Ileni unravels the mystery surrounding their deaths, she’ll uncover secrets that have been kept for decades—and she’ll find an unexpected ally and dangerous new love.

But even he may not be able to protect her. Not when she’s willing to risk everything.

To be entered in the raffle for a signed copy of Death Sworn, use the Rafflecopter entry below. Every task completed will get you more entries!

Ileni turned and scowled at him, feeling dangerous. “I would advise against comparing me to your previous tutors. You might be in for some unpleasant surprises.”

He just looked at her. The expression on his face was intolerable. It said, You’re not dangerous at all. I see right through you.

He knows… but no, he couldn’t. If they knew how useless she was, she would already be dead.

So Ileni closed her eyes and reached for the memory of the last spell she had learned. She hadn’t mastered it fully yet, but she didn’t care. She spat out the words of the spell, flung out her hand, and unleashed all her fury on the smirking, self-important killer in front of her.

A flare of green light hit Sorin in the chest and threw him backward, flipping him head over heels. To Ileni’s amazement, he landed on his feet, dagger in hand.

And then he was in the air again, flying toward her with the blade pointed straight at her.

He was only inches from her when the air around Ileni exploded, and Sorin shouted. The dagger flew out of his hand, bouncing off one of the craggy walls of the cavern, and his body flew in the opposite direction, crumpling against a particularly jagged outcropping of rock. He did not land on his feet this time.

Ileni stepped forward, afraid she had killed him. As her wards had reacted, she’d realized the dagger was slicing at her hair, not her throat. But then he leapt to his feet, one hand pressed to his side, staring with an expression that should have gratified her: astonishment and fear.

Except he wasn’t staring at her.

Ileni followed his gaze. The cacophony of clinks and thuds and grunts coming from the main training area had gone silent. A cluster of assassins stood in the arched cavern entrance, staring, the pretense of disinterest wiped off their faces.

Her role as their tutor, apparently, was off to a great start.