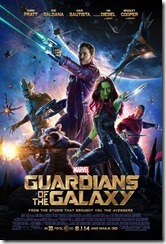 Marvel films have become famous for their post-credits teasers. From the first Iron-Man movie, when Nick Fury shows up to tell Tony Stark about something called the “Avengers Initiative”, fans have learned to stay all the way to the end to get a new treat.

But if you waited until after the (amazing, incredible, hilarious) newest Marvel offering, Guardians of the Galaxy, you were probably really, really confused.

Only the die-hardest Marvel comics fans would recognize the not-quite-Donald-Duck having a drink with Benecio del Toro’s Collector. But that character is a huge inside joke director James Gunn is offering to Marvel’s most dedicated.

So who exactly is Howard the Duck? And why was he in that scene? 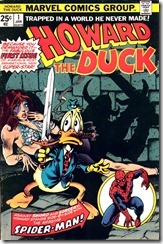 Howard the Duck is a Marvel comics character created in the early 1970s by Steve Gerber and Val Mayerik. Almost from the beginning, writers used Howard as parody and meta-commentary (this was nearly 20 years before Deadpool would become famous for the same brand of meta-humor).

Though his series was constantly cancelled and rebooted, Howard began showing up in all kinds of Marvel properties, nearly always as a gag. Brian Michael Bendis – one of Marvel’s most prolific and important current writers – was once asked about an apperance of Howard in one of his stories (Howard appeared in a huge fight involving dozens of superheroes). Bendis replied

That character has shown up in six issues I’ve done, and I’ve never typed the words Howard the Duck.

In Marvel Comics, Howard the Duck has become an inside joke for writers, artists and astute readers. So why did director James Gunn put him in Guardians of the Galaxy? 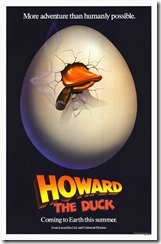 Now that Marvel Studios are producing their own films, it seems they can’t make a misstep. Every film has been at least good, and most of them have been fantastic. After the success of The Avengers, we all wondered how Marvel could keep up their momentum. But the successes of Iron Man 3, Thor: The Dark World and Captain America: The Winder Soldier proved Marvel has what it takes to keep making great films. And now Guardians of the Galaxy proves that Marvel can take even characters largely unknown outside the comic world and make a fantastic movie.

But that wasn’t always the case. In 1986, Howard the Duck became the first film ever to feature a Marvel character (not counting a 1944 version of Captain America). But Howard the Duck was terrible. It was critically panned and bombed in the box-office. Marvel’s first cinematic adventure failed utterly.

Given his box-office history, Howard the Duck was the perfect choice for Gunn’s post-credits scene.

Possibly the very worst thing Marvel could’ve done is continue their post-credits teasing. It worked in Phase 1 (Iron Man through The Avengers) because it hadn’t been done before. No film series had tried to link so many disperate films, to build them up into a huge finale like The Avengers.

But once it’s been done, it’s been done. And the longer Marvel continued to tease post-credits, the more real the danger they become parodies of themselves. So Iron Man 3 gives us Tony and Bruce Banner talking. Thor: The Dark World introduces us – albeit obliquely – to Guardians of the Galaxy, and teases not Avengers 2, but Avengers 3. Captain America: The Winter Soldier gives us our only true Avenges 2 tease, and that leaves Guardians of the Galaxy to have a bit of fun with us. To subvert our expectations the way that fantastic schwarma scene at the end of The Avengers did.

So James Gunn chose to give us Howard the Duck. To use some comic book insider language to create a complex, layered joke.

As the Marvel Cinematic Universe continues to expand, we’re going to start seeing more than two films per year. That means, if we keep getting an Avengers-style team-up film every three years, we could have as many as 6 films between them. That’s a lot of teasing if every film is beholden to a post-credits scene.

I’d frankly rather more of the filmmakers follow James Gunn’s lead, and have a little fun. I didn’t mind waiting for one more joke in a film packed full of them! Long live Howard the Duck!

YOUR TURN : Did you enjoy Howard the Duck’s appearance?