To be is to be perceived. The only way to know thyself is in the eyes of the Other.
— Sonmi-451 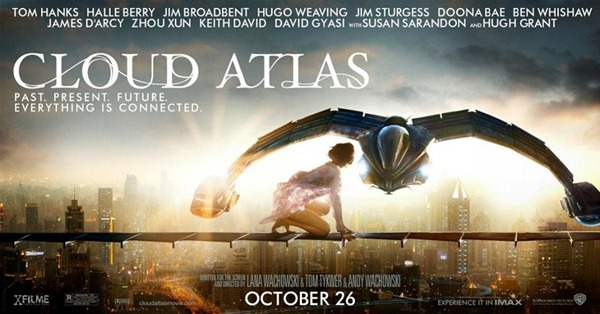 Cloud Atlas is the ambitious new film from the Wachowski Siblings (The Matrix Trilogy) and Tom Tykwer (Run Lola Run). Based on the novel by David Mitchell, it features six stories set from an 1849 slaving ship to far-future, post-apocalyptic Hawaii. The star-studded cast all played roles in each of the storylines, sometimes in such good makeup they were unrecognizable.

The film ends with a shooting star flashing across the sky, calling to mind the shooting-star-shaped birthmark we saw over and over on the film’s central characters. We’re meant to understand that each human life is just that: an all-to-brief flash in an endless ocean of time.

Though each human life seems small and insignificant, Cloud Atlas demonstrates that our actions have meaning. Our choices ripple throughout time.

In 1849, blacks are held to be naturally inferior to whites. Slavery is the natural order. In the late 1920s, we get hints of Nazism and the oppression of the Jewish people. In the 1970s, it was the corporations destroying the environment and in 2012, middle-aged people sent their aging parents to nursing homes. 2144 shows us a dystopian future in which we grow slaves replicants to serve the all-mighty Consumers. And in the post-apocalyptic world, Valleymen hide from the cannibalistic Kona, who slaughter and consume them without mercy.

There is a natural order to this world. And for those who try to end it does not end well. — Haskell Moore/Boardman Mephi

In every time, some profit from power (Hugh Grant). Some, because they see it as the ‘natural order’, work to uphold the Way Things Are (Hugo Weaving). Everyone else is caught in between, wondering if the world can ever be other than the Way Things Are.

In 1849, Dr. Henry Goose digs up teeth on a beach, teeth that he says were buried by cannibals. From Cannibalism to slavery. From Slavery to Holocaust. From Holocaust to shutting away the old and broken. From Nursing Homes to Soylent-Green Replicant Recycling facilities. From the facilities back to Cannibalism.

In every story, Cloud Atlas highlights two forces at work in the world. One is greed. One is love. One dehumanizes, profits at the expense of the Other, and brings death. The other humanizes, embraces the Other and brings life. Characters in each story are torn between these two forces.

Will we join against the forces that seek to dehumanize us? Or will we continue to ignore those we’ve been told are invisible?

You have to do whatever you can’t not do. — Louisa Ray

Cloud Atlas demonstrates that we only overcome our prejudices by engaging the Other.

It’s not until those who have power are forced to confront the humanity of those they oppress that they begin to change. So Adam Ewing discovers a friend and savior in the stow-away slave Autua. Meronym (Halle Berry) doesn’t value the lives of the Valleymen until she befriends Zachry (Tom Hanks). And the Archivist sees no reason to question the system until he interviews Sonmi-451.

That ship must be destroyed. The systems that built it must be torn down. Whether born in a womb or made, We are all pure blood. We must fight and even die to reach everyone the truth.
— Sonmi-451, upon seeing the ship that “recycles” replicants

Once we’ve overcome our prejudices, we can join the fight to humanize the Other. We can join the struggle against the systems of oppression we find in our own time.

Knowledge is a mirror. I was finally able to see what I was. And what I could be. — Sonmi-451

All it takes is a vision of a better world. A better, more just world can’t be unseen, so its advent can be delayed, but not stopped.

I’ve seen too much of the world.  I’m no good slave. — Autua

Though our lives may be the briefest flash, we can use them to make a difference. We can imagine a better world, then take the first, small steps toward it. Ultimately, this may be our greatest gift to the world. It’s certainly Cloud Atlas‘ strongest message.

Our lives are not our own. From womb to tomb we are bound to others. Past and present. And by each crime and every kindness we birth our future. — Sonmi-451

Bottom Line: Cloud Atlas is a powerful film that deals with important themes. You’ll want to see it more than once.

YOUR TURN: What did you think of Cloud Atlas? Which story was your favorite? Do you agree with its themes?