Ken Burns is back doing masterful historical story telling. His latest project is on three people named Roosevelt who occupied the White House for 19 of the first 45 years of the 20th century. In so doing, they helped define the world more than any other American family.

And we’ve got an extended sneak preview right here at NorvilleRogers.

First, here’s the short trailer to whet your appetite.

For the past quarter century his team has chronicled topics such as the U.S. Civil War, Jazz, World War II, Baseball, National Parks, the American West, and many others.

Geoffrey Ward once again joined Burns to write on this project. Stricken with polio at age 9, Ward brings a unique perspective to the challenges FDR faced after his own diagnosis at age 39. Such insight is at the heart of why this show is called The Roosevelts: An Intimate History. It’s personal. Events of the world will be seen through the most private lens of one of America’s most influential families.

Here are two extended clips for you. The first is only 7 minutes; the second is more detailed at around thirty minutes and includes multiple excerpts. Enjoy.

Let your history-loving friends know about this new show. 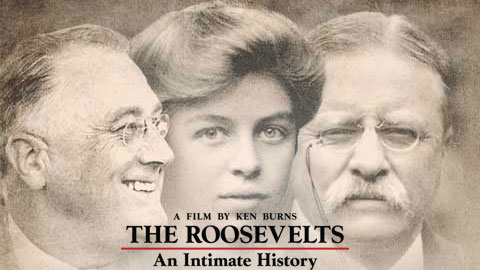 What is your favorite Ken Burns series?