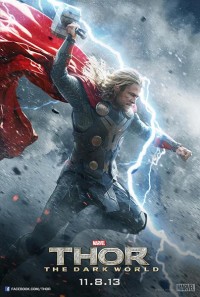 Thor: The Dark World (hereafter Thor 2) is Marvel’s second post-Avengers solo-super-hero film, and it proves that Iron Man 3‘s success was no fluke. Marvel has indeed figured out how to make great films that don’t have 5 all-star headliners. Thor 2 improves on its predecessor (Thor, not The Avengers) in every way. The scope is bigger, the stakes are higher, the tie-in with the larger Marvel universe is tighter (without distracting the way Iron Man 2 did). It’s bigger, louder, more fun, funnier and just all around great.

Thor 2 isn’t really about much, but then none of the Marvel movies are. They all tease around some larger issues, but so far, the word of the day at Marvel Studios has been fun. (Compare Marvel’s flicks with Noland’s Dark Knight saga or Man of Steel‘s gloomy realistic Superman.)

I don’t claim Thor 2 is perfect. I claim you won’t care that it’s not.

Here’s the thing: Thor 2 shouldn’t work at all. Thor is a Norse god who is actually an alien. On one hand, we have a clear fantasy world: Asgard with its Viking mythology, swords, a hammer that shoots lightning, ale, elves and kings, ‘nine realms’ that are aligning. On the other hand is a clear sci-fi world: interstellar travel, space-ships, laser rifles and aliens. These two worlds shouldn’t mesh.
And yet they do, seamlessly. Elves shoot laser rifles at soldiers fighting them back swords and shields. A spaceship descends on mythic Asgard, only to be repulsed by anti-aircraft guns and a giant energy shield. A monster called the Kursed, created by magic, is destroyed by a black-hole grenade. Thor, Norse god of thunder, can fall in love with an astrophysicist and they must work together to save the nine realms. Or the universe. It’s both.
How does it work? I credit director Alan Taylor, who’s helmed multiple episodes of Game of Thrones and clearly has a strong sense of tone. Under Taylor’s expert guidance, the film just flat out works. I don’t care whether the nine realms are dimensions or planets or one universe or a multiverse. I don’t mind space-ship flying elves or gods who are just long-lived aliens. It all feels like part of the same universe and it works, maybe because Taylor asks me not to think too hard, just to sit back and enjoy the show.
Nowhere is this clearer than when Jane Foster is being examined on Asgard. She’s in a machine the Asguardians call a “Soul Forge”. When she asks if it’s a molecular field generator and is curtly silenced, she pushes back:

Does a Soul Forge create transfer molecular energy from one place to another? …Then it’s a molecular field generator.

Taylor knows we don’t have a clue what either a “Soul Forge” or a “Molecular Field Generator” are. He winks to us, reminds us that both fantasy and science fiction are acts of imagination and invites us to relax and have fun.
And really, what more could you want from a comic book movie about a Norse god?

Bottom Line: Thor: The Dark World is a worthy successor to both Thor and The Avengers. It’s a great installment in the growing Marvel Movie-verse.

YOUR TURN: What did you think of The Dark World? Do you enjoy Marvel’s Phase II so far?